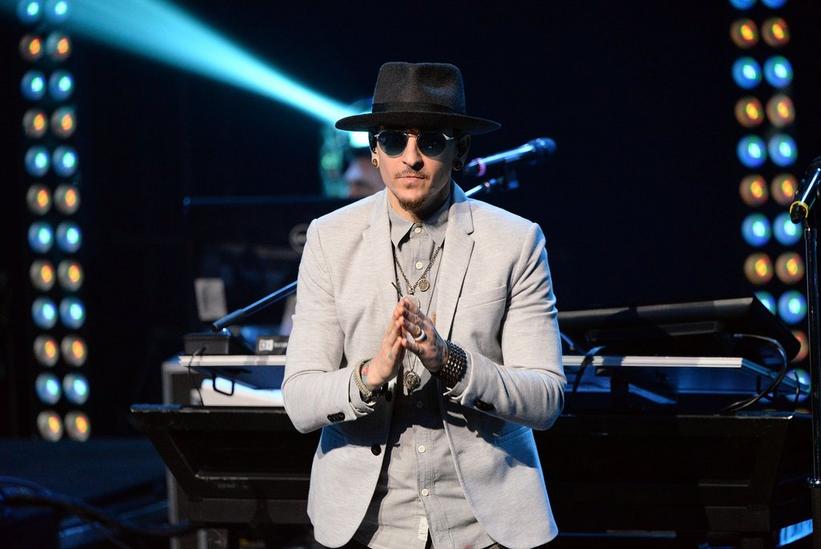 Bennington became acquainted with his future Linkin Park band members in early 1999, the same year he moved to Los Angeles. Released in 2000, the group's debut album, Hybrid Theory, was a huge moment in the lives of Bennington and his bandmates — it was nominated for the GRAMMY for Best Rock Album and the single "Crawling" won the GRAMMY for Best Hard Rock Performance at the 44th GRAMMY Awards.

The album would also eventually be certified diamond in the U.S. and multi-platinum in several countries. The fourth single, "In The End" also charted No. 1 on the Billboard Mainstream Top 40 and Alternative Songs charts, and No. 2 on the Billboard Hot 100.

Following their unexpected success with Hybrid Theory, the band continued to see strong critical and commercial success. Their sophomore effort, 2003's Meteora, would take the top slot on numerous album charts around the globe, including hitting No. 1 on the Billboard 200. The album blew the doors off Hybrid Theory's first-week sales numbers, raking in over 800,000 units sold in its first seven days.

Bennington's next GRAMMY Award came after he and Linkin Park co-founder Mike Shinoda created Collision Course, a mash-up EP that paired tracks from the band's first two albums with beats and vocals made famous by fellow GRAMMY winner Jay-Z.

One of the songs from that album, "Numb/Encore" earned Bennington and Linkin Park their second GRAMMY for Best Rap/Sung Collaboration with Jay Z at the 48th GRAMMY Awards.

Born in Phoenix, Bennington became interested in music at a very young age, using his artwork and writing poetry as outlets for his emotions in the face of difficult family dynamics and daily bullying at school as a young child.

His biggest musical inspirations were Depeche Mode and Stone Temple Pilots, and he grew up dreaming of one day singing lead vocals for the latter group. That dream would eventually come true for a period from 2013–2015, after which, Bennington stepped back to return his focus to making new music with Linkin Park.

His ongoing path toward recovery, along with his support for the MusiCares MAP Fund and his dedication to helping other artists who were likewise working to find sobriety, led to his being honored alongside skater Tony Alva at the 9th Annual MusiCares MAP Fund benefit concert in 2013.

Bennington's tragic passing comes at a time when he and his band were touring in support of their latest full-length LP, One More Light, just released in May of this year.

"As the cutting-edge lead vocalist of Linkin Park, Chester’s powerful range, paired with his impressive songwriting skills, made him a bona fide hard rock hero," said Recording Academy President/CEO Neil Portnow. "His riveting stage presence made every live performance magnetic, earning him millions of fans around the globe. We have lost a truly dynamic member of the music community and our sincerest condolences go out to Chester’s family, friends, collaborators, and all who have been impacted by his work."