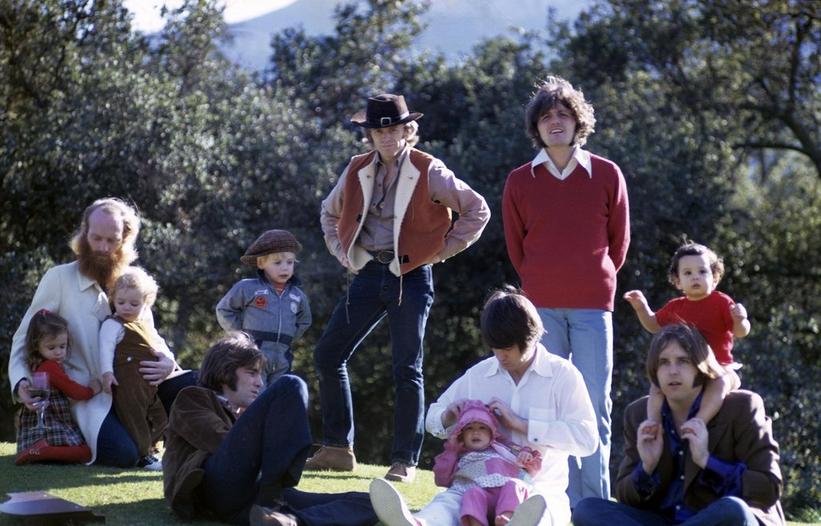 Brian Wilson Is A Once-In-A-Lifetime Creative Genius. But The Beach Boys Are More Than Just Him.

Brian Wilson is inarguably responsible for the Beach Boys' most flabbergasting creative triumphs, from 'Pet Sounds' to "Good Vibrations." But as a new boxed set, 'Feel Flows,' shows, they could have kept on blossoming under his brother Carl's leadership

The Beach Boys may be the only canonical band in their league to be essentially cleaved in two, commanding two separate audiences. But it goes even deeper than that: Fans tend to understand them via two incompatible narratives.

One is that Brian Wilson—a once-in-a-lifetime harmonic innovator and studio visionary by the age of a typical college student—can do no wrong, only muzzled by that meddling Mike Love. The other is that their critically acclaimed mid-'60s experimental period—Pet Sounds, "Good Vibrations"—was where their run as hitmakers ended. Through that lens, their Brian-free 1988 tropical hit "Kokomo" wasn't a trapdoor into kitsch, but a desperately needed comeback after years of zero hits.

Such is the reductive, binary discourse surrounding these classic rock legends: It's "Brian good, Mike bad" or some form of the opposite. This brings us to the 1970s when Brian took a backseat due to mental health issues and creative demoralization. If Brian Wilson "walks on water"—as Love once put it—this may seem like the beginning of their long sundown. Dennis Wilson himself said it: "Brian is the Beach Boys. He is the band. We're his f*ing messengers. He is all of it. Period. We're nothing. He's everything."

Again, Brian is a national treasure, but his drummer brother was wrong on this—and a new boxed set proves it once and for all. Feel Flows: The Sunflower & Surf's Up Sessions 1969-1971, which arrived August 27, contains brilliant remasters of those two excellent, underrated albums from that fork in the road, plus plentiful outtakes and live tracks. Gorgeous songs like "This Whole World," "Add Some Music To Your Day" and "Don't Go Near the Water" show they could have continued like Pink Floyd post-Syd Barrett, making masterpieces without their erratic founding genius.

More importantly, Feel Flows underlines the radiant and lionhearted soul of Carl Wilson over and over. When Brian's struggles became untenable, his brother assumed the role of musical director without drawing attention to himself or making a big deal about it. And although they spent the following decades looking over their shoulder for Brian to return, Carl helmed the band throughout the '70s and beyond. When he died in 1998, the center gave way and the members toured as separate entities.

"I think in a post-Brian Wilson world when the band started touring extensively in the late '60s and especially the early '70s, it was clear that Carl was the leader of the band," Erik Long, who produced a major Beach Boys concert in the '80s and was close friends with Carl, tells GRAMMY.com. "I think what stood out about Carl is that when you were with him, he made you feel more special than he was. That's a remarkable feeling."

The largely home-recorded Sunflower came out in 1970, which was indisputably primetime for singer/songwriter music: Carole King's Tapestry, Joni Mitchell's Blue and Neil Young's After the Gold Rush came out within a year of it. That was the album where the Beach Boys grew out of their Pendleton shirts and rebranded themselves as a commune of hairy, soulful folkies. On the cover, they pose with their children in verdant climes; Al Jardine rocks cowboy getup; Love looks like he never left Rishikesh. They'd grown up.

While the music is a little more commercial and lighthearted than Pet Sounds, it's no less lush and cohesive. Here were six singer/songwriters at full bore: Dennis bared his soul with the majestic "Forever"; almost-founding-member Bruce Johnston wrote the loping, lovesick "Dierdre"; Al Jardine and Love have several co-writes. And Carl's musical and personal qualities shine through almost every note of it—especially when he takes one of his warm, punchy vocal solos, like on the goosebumps-inducing "Add Some Music To Your Day."

"Carl wasn't really credited for this, even though he was on the original track sheets, but he was producing this overall and just kind of quietly, methodically making sure everything was getting finished," Beach Boys archive manager Alan Boyd tells GRAMMY.com.

Feel Flows producer and engineer Mark Linett agrees, contrasting Brian's and Carl's temperaments and approaches. "Brian tends to be very instinctive," he tells GRAMMY.com. "Get it down, get it done quickly. As opposed to Pet Sounds, where the musicians recorded en masse, "When multitrack recording came in and became more a matter of layering vocals and different parts, I think Carl was better at dealing with a long-haul type of thing."

The Beach Boys got darker and more ecologically conscious with 1971's Surf's Up, whose shadowy cover features a defeated-looking Native American slumping on his horse. Whereas Sunflower was a democratic effort with Brian still part of the team, he was scarcely involved with its moodier, more scattered follow-up.

In his relative absence, Carl shone even brighter, contributing signature songs like "Long Promised Road" and, yes, "Feel Flows." Elsewhere, Love lets off some social commentary with "Student Demonstration Time" and Johnston slams it out of the park with his drop-dead gorgeous "Disney Girls (1957)." While the title track is a majestic Brian holdover from 1967's never-finished Smile and it contains oddities like the dirge "A Day in the Life of a Tree"—crooned by their then-manager Jack Rieley—Surf's Up is a rough-hewn classic.

To be clear, there is nothing quite on par with "God Only Knows" or "Don't Talk (Put Your Head On My Shoulder)" or "Good Vibrations" on Feel Flows. But it shows how their branches were growing in fascinating directions nonetheless, especially in the wealth of previously unheard bonus material.

Could they have built on the funk of "Slip On Through," heard here in a trippy, groovy alternate version? What if they got deeper into the delicacy of "At My Window," giving us a run of Incredible String Band-style acoustic albums? To say nothing of the hard rock in these live tracks, which this band rarely gets credit for: What would the Beach Boys look like as unadulterated stadium rockers?

We'll never find out because the Beach Boys opted to take half-measures in Brian's absence. Given his monster talents, this is somewhat understandable. There are a small handful of other quietly great, Carl-helmed Beach Boys records throughout the 1970s, like 1972's Carl and the Passions — So Tough and 1973's Holland. But whether due to creative insecurity or outside pressures, that was it for their imperial reign as artists, even if they remain unbelievably popular and beloved six decades after they formed.

But while Feel Flows teases what could have happened, it also shows what did: With Carl as their center and essence, the Beach Boys pushed beauty into the world even when Brian couldn't be there for it. There's a very visible and celebrated genius at the center of this story, and most of the attention is heaped on him as a result. But the reality is so much sweeter: There were six of them.