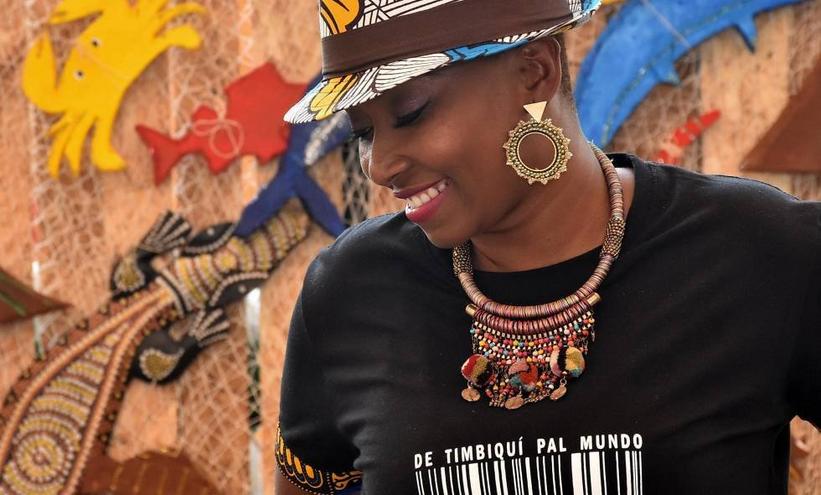 Photo Courtesy of the Artist

For Colombian singer/songwriter Nidia Góngora, performing isn’t only about showcasing her talents. "I feel pride in being able to present another side of Colombia, the Pacific region, which is also Colombia and is hardly ever shown," she says, speaking via Zoom from the remote town of Timbiquí.

Góngora, who grew up in Timbiquí, is a champion of the Pacific coast’s Afro-Colombian cultural heritage. With her band, Canalón de Timbiquí, and as a solo artist, Góngora highlights the region’s traditional folk music — a genre known as curralao, which is performed with marimba and percussion.

On 2021's Almas Conectadas, a collaboration with the English producer Quantic, Góngora fused her folkloric style with electronic music. The result was a breathtaking work that fostered intercultural dialogue — and more new collaborators. Through Quantic, Góngora met French trumpeter and producer, Etienne Sevet, who performs as the Bongo Hop.

La Ñapa, out May 6, is the third release with Sevet. In the standout titular track — which features a booming brass section and showcases Sevet's talent for dancefloor-ready arrangements — Góngora sings about an angry street vendor. Introducing the audience to Colombian slang, Góngora addresses, with humor, the reality of hustling in a city where people thrive to make ends meet.

"The shopkeeper has a long list of borrowers that won’t pay, so when people go and ask for ñapa, a little extra product, he will refuse to barter," Góngora explains, laughing. "So in this video, when I go shopping, I ask him to not get mad at me, because I came there to pay."

Below, Nidia Góngora speaks with GRAMMY.com about her activism, musical roots, and the sounds of her hometown.

How did you become interested in singing, and how did you start making music?

I come from a family of songstresses from Timbiquí, and I was raised on my mother’s side with the influence of traditional music and on my father’s side, listening to music from all over the world. Without a doubt, my family cultivated my love of music.

Timbiquí is a very musical town; music there plays a very important role in people’s lives and our traditions. I always had a strong bond with music, since I was a child, and so I first focused on playing traditional folk music.

Can you tell us a little more about Timbiquí’s traditional music?

Timbiquí’s traditional music is a sound that comes from the jungle, and the sea, it’s a sound that represents the natural elements. So we have the marimba de chonta [a percussion instrument], which sounds like rain, we have the bombo and the cununo [Indigenous percussion instruments], which are drums that represent the thunder, the strength, and power that inhabits the jungle. All of them are made with materials found there. That’s why the music made in the Pacific region is always reminding us that we live amongst nature, and we have to live in harmony with it.

Singing is also part of that, women learn to harmonize, and through singing collectively, our voices preserve an ancestral oral tradition. Our music is music that has been passed amongst generations; they are ritual spaces where we sing to nature, life, and even death. Well, we sing to anything and everything that moves! [Laughs]

In past interviews, you've said that this tradition has been kept alive by women, in spite of men.

There is a strong leadership despite machismo, but there is also a strong matriarchal movement in the Pacific, centered around women, and our grandmothers. They are the ones who keep the stories, anecdotes, and wisdom. They are the elders (we call them mayoras), and they raise us with the idea that we are keepers of our traditions. Therefore, we are women that edify our community.

Women are the ones in charge of organizing cultural and religious events, and political and social gatherings, and we are also in charge of raising the children, farming, and mining for gold. We are in every space and in every process, not only in strengthening and community action but in everything that has to do with empowering ourselves. And we do that through singing, poetry, and ancestral practices like medicine and gastronomy. So it is truly women… who keep alive the strength and spirit amongst local communities.

Is that strength what inspired you to lead your group, Canalón de Timbiquí?

Canalón de Timbiquí is a process of musical relay between generations. It is a process of transmission of knowledge that we, as women, have dedicated to replicating. Our duty as cantoras [songstresses] is to not let the tradition die and to promote it, transmitting it to younger generations.

We have done a huge amount of labor to make our music known internationally, but we have also generated strong local spaces where music is still needed. We believe the traditional music of the Pacific and all of this knowledge is super relevant because it’s music that heals, and has transformative power. The music we are showing to the world speaks of a territory that has been ostracized, and impoverished, but we speak of its powerful elements. We speak of our ability to move forward, as a Black community, and as a community that has contributed to the growth of this country and to its society as a whole.

How did you leap from making traditional folk music to electronic music?

I started working with electronic fusion when I met Quantic, a British producer in 2017. At first, it was… difficult for our elders to understand that our music would leave its natural structure, its home, so they said the music would be diluted. They were worried I was somehow renouncing our musical roots.

So my idea was to explain that our music is full of power and that it is important to explore it through different sonorities. Just as we open our hearts to give, we open our hearts to receive. I felt refusing to receive is refusing to learn to expand our culture and become known. It was always a dream of mine to take the music of the Pacific to the rest of the world and to explore other musical universes through it. That is how I met Etienne [the Bongo Hop].

What do you like the best about collaborating with the Bongo Hop?

I really appreciate Etienne’s work and his curiosity to learn about all sorts of music. I really love this project because it’s music that gives me a lot of joy, that also connects me with African roots, and mixes three different cultures in one musical act.

With it, we can bring music to new audiences and connect through music as a universal language. It is incredible to be able to collaborate together, even being in different countries, and to be able to show Timbiquí’s music. It’s something we rarely get a chance to do: To shout out loud that we are here, and that we are also part of Colombia.

R&B, Hip-Hop And…Harp?: How Madison Calley Is Changing The Way Classical Music Is Viewed And Heard