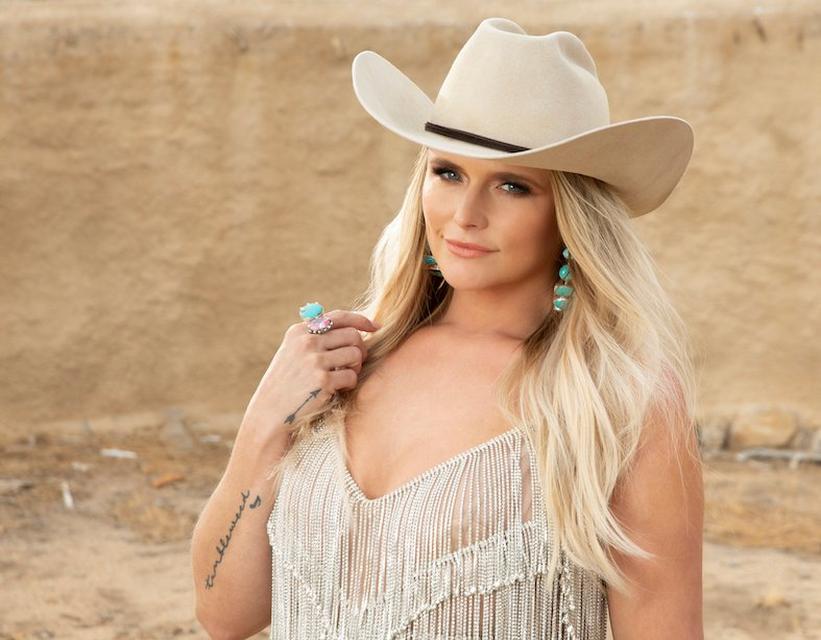 With her eighth studio album, 'Palomino,' Miranda Lambert braids her storytelling prowess, rock edge and outlaw foundation to create one of her most career-defining works to date.

In 2021, Miranda Lambert displayed two completely opposite ends of her musical range. First, she channeled her rowdy side with Elle King for the crossover hit (and country No. 1) "Drunk (And I Don't Wanna Go Home)." A few months later, Lambert — along with her frequent songwriting partners Jon Randall and Jack Ingram — unveiled The Marfa Tapes, a collection of songs so radically acoustic that you can hear a crackling campfire and lowing cows in the background.

All this to say: The direction Lambert planned to take on her next studio album was anybody's guess.

She could have embraced the stripped-down approach that served her so well on The Marfa Tapes, or turned inward for a singer-songwriter project like her 2016 double album, The Weight of These Wings. She could have leaned harder into the Tom Petty-esque rock she flirted with on 2019's Wildcard, or returned to the guns-blazing, snarling country that fans first fell in love with on her 2005 debut, Kerosene.

But with Palomino, Lambert saddles up for a musical journey that embraces her multiformity. Its 15 tracks span the wide-open reach of her artistic vision, stitched together by the confidence of a performer who is entirely in control of who she is and what she wants to say.

Lambert's Rock Edge Was No Fluke

After Wildcard came out, Lambert attributed her move towards a more rocking sound to all the time she was spending in New York City, getting to know her now-husband Brendan McLoughlin. A few years and one pandemic later, Lambert has made a return to her country roots — but she's kept some souvenirs from the rock world with her.

"Waxahachie" features an angsty drum beat and breezy jangle that would feel at home on a Fleetwood Mac record. The wailing "Strange" takes cues from '90s alternative, while "Country Money" borrows from the audio-sampling weirdness of 2000s alt-rock like the Avalanches and the Gorillaz.

In a March conversation with Rolling Stone, Lambert — who is 38 — admitted concern over how her biggest hits will age. "I struggle because I have to sing 'Kerosene,' 'Mama's Broken Heart' and 'Little Red Wagon' forever, and what's that going to look like at [age] 70?" she said.

At the same time, the singer remembers her grandmother — "a firecracker until her last breath, drinking Crown and coke," she told RS — and realizes that she can keep her wilder side as she gets older, albeit with some alterations.

Hence Palomino's opening track, "Acting Up," which trades the raging guitars and belted notes of "Kerosene" for a subtler form of rebellion. With playful lyrics ("Even Tiger Woods couldn't swing it this good," she sings on the second verse) and commitment to the groove, the song helps Lambert prove that wandering souls are ageless.

The Marfa Tapes Translates Well To The Studio

Three cuts off Marfa Tapes — "In His Arms," "Geraldene" and "Waxahachie" — make an appearance on Palomino. Though now outfitted in studio magic, they're still recognizable as the same sparse, dazzling songs that Lambert recorded with Randall and Ingram in the West Texas wilds.

The fact that fans first got to know these tracks in a stripped-down, demo-like state served them well on Palomino. Watching them transform into full-studio recordings feels less like a magician giving away the trick, and more like a makeup artist giving a tutorial — drawing lines that may seem random or mystifying in the moment, but give way to a finished product that's ingenious.

A year after her intensely public divorce from Blake Shelton, Lambert released The Weight of These Wings, a double album teeming with raw heartbreak songs like "Vice," "Ugly Lights" and the GRAMMY-nominated "Tin Man." After a project like that, fans may have felt disappointed when Lambert announced her marriage to Brendan McLoughlin in 2019. What would happen to the road-loving, often searingly lonesome songs that make up so much of her discography?

Not to worry: That kind of song is alive and well on Palomino, at least half of which consists of wanderer's anthems like "Tourist" and lead single "If I Was a Cowboy." Moreover, Lambert finds a way to braid love songs into her story — without an ounce of schmaltz.

"Geraldene" sneers at a woman who is a shabby imitation of Dolly Parton's "Jolene," but there's a love story — about the man Lambert's not worried about losing — buried somewhere in there. Even more on-brand is "I'll Be Loving You," a rambler's love song about finding a partner who's "at the end of every road."

Palomino Is Lambert's Storytelling At Its Finest

Lambert has always been a fan of a good story song, but Palomino breaches completely new, innovative territory. Much of the songwriting is character-based, with Lambert's lyrics filling in vibrant detail on far-flung landscapes — the Mojave Desert; Shreveport, La.; the Cumberland River rolling through Nashville; Buck Owens' Crystal Palace in Bakersfield, Ca. — and the characters who populate them. Sometimes Lambert is a character in these stories, and sometimes she's just a fly on the wall.

"There's always been a stranger in my soul/ Who loves a good goodbye and good hello," she sings in "Tourist." That's a fair mission statement for the album: The songs shift from town to town, genre to genre, era to era.

With that, Palomino is a celebration of Lambert’s storyteller expertise and a showcase of the multifaceted star she’s become — but proof that her country foundation will always remain.

Kelly Clarkson To Perform National Anthem On Super Bowl
GRAMMY winner and 54th GRAMMY Awards performer Kelly Clarkson is set to perform "The Star-Spangled Banner" prior to Super Bowl XLVI in Indianapolis on Feb. 5, according to a Billboard.biz report. GRAMMY winner Miranda Lambert and current GRAMMY nominee Blake Shelton will perform "America The Beautiful," and Madonna will be the featured performer during the halftime show. (1/12)

The special marks the third time nominations for the annual GRAMMY Awards will be announced live on primetime television. Last year's airing of the nominations special reached more than 7 million viewers and led to double-digit percentage increases in all key demos for the 52nd Annual GRAMMY Awards telecast earlier this year, delivering the show's best ratings in all key measures since 2004 and the biggest year-over-year increase in more than 20 years.

The road to Music's Biggest Night begins with "The GRAMMY Nominations Concert Live!!" and culminates with the 53rd Annual GRAMMY Awards, live from Staples Center in Los Angeles on Sunday, Feb. 13, 2011, and broadcast on CBS at 8 p.m. ET/PT. For updates and breaking news, please visit The Recording Academy's social networks on Twitter and Facebook.

Met Opera Expands Theater Series
The Metropolitan Opera has expanded its "Live in HD" series by 300 theaters, now bringing the series to 1,500 theaters in 46 countries for its 2010–2011 season. The program, in its fifth season, brings Met Opera performances into theaters, which last season resulted in $48 million in ticket sales. The expansion brings the program for the first time to Egypt, Portugal and Spain, and grows the U.S. theater base by 100 to 620. (9/1)

Lambert Earns Record Nine CMA Nods
GRAMMY-nominated artist Miranda Lambert received a record nine nominations for the 44th Annual CMA Awards, the most ever for a female artist, when the second round of nominations were announced today. Lambert's nominations include Female Vocalist of the Year, Album of the Year, Video of the Year, and Entertainer of the Year, among others announced yesterday [link to: http://www.grammy.com/blogs/first-round-cma-nods-announced]. GRAMMY winners Lady Antebellum earned the second most nominations with five, followed by the GRAMMY-winning Zac Brown Band and Blake Shelton, who tied with four. The 2010 CMAs will take place on Nov. 10 in Nashville, Tenn. (9/1)

UMG Revenue Down In First Half Of 2010
Universal Music Group has reported revenue of $2.4 billion for the first half of 2010, down 5.4 percent compared to the same period last year, and a 24.6 percent drop in EBITA (earnings before interest, taxes and amortization) to $203.6 million. The company lists releases from Justin Bieber, the Black Eyed Peas, Eminem, and Lady Gaga, among others, as the big sellers in the first half of the year. (9/1)