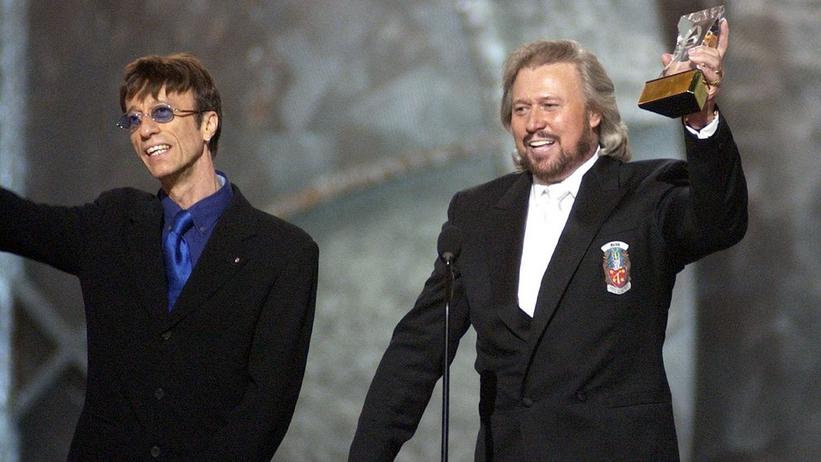 Revisit Robin and Barry Gibb's emotional speech in honor of their late brother and Bee Gees bandmate Maurice in this episode of GRAMMY Rewind.

Emotions were running high at the 45th GRAMMY Awards in 2003, when Bee Gees bandmates and brothers Robin and Barry Gibb took the stage to accept the band's GRAMMY Legend Award. It was a bittersweet moment, as one-third of their sibling trio, Maurice Gibb, had died at the age of 53 just weeks before the ceremony.

In this episode of GRAMMY Rewind, revisit that unforgettable moment. Robin and Barry were near speechless as they took the stage, taking a moment to thank boy band *NSYNC, who performed a medley of Bee Gees hits as a tribute earlier in the ceremony.

But foremost on the bandmates' minds was family. They quickly turned the spotlight onto their late brother and those closest to him, including his widow Yvonne and children Adam and Samantha, who were in the audience.

"The measure of a man is his family — we think, anyway — and so we want you to meet Maurice's family," Barry told the audience, before asking Maurice's family members to stand. "I think your dad would have loved this. We know he's watching. He always watched the GRAMMYs, and tonight he's watching. And I think the nicest thing that could happen is if his son came up and took this award, so we're giving him ours."

He then called Adam to the stage, who offered his own brief tribute to his late, legendary father. "I know how much my dad loved doing what he did, and he'd love being here right now," he said. "I know he'd wanna thank one person, and that's my mom, because she was his rock."

It was an emotional moment for the entire family. Yvonne and Samantha were misty-eyed as they watched from their seats, while Barry also held back tears as he stood behind his nephew on the stage.

The Legend Award marked a major milestone for the Bee Gees, and put them in rare company: Only 14 other artists have received the GRAMMY Legend Award, including Elton John, Aretha Franklin and Michael Jackson. Throughout their career, the Bee Gees won five GRAMMYs and received nine GRAMMY nominations overall.

Press play above to watch the tender moment in full, and keep checking GRAMMY.com for more episodes of GRAMMY Remind. 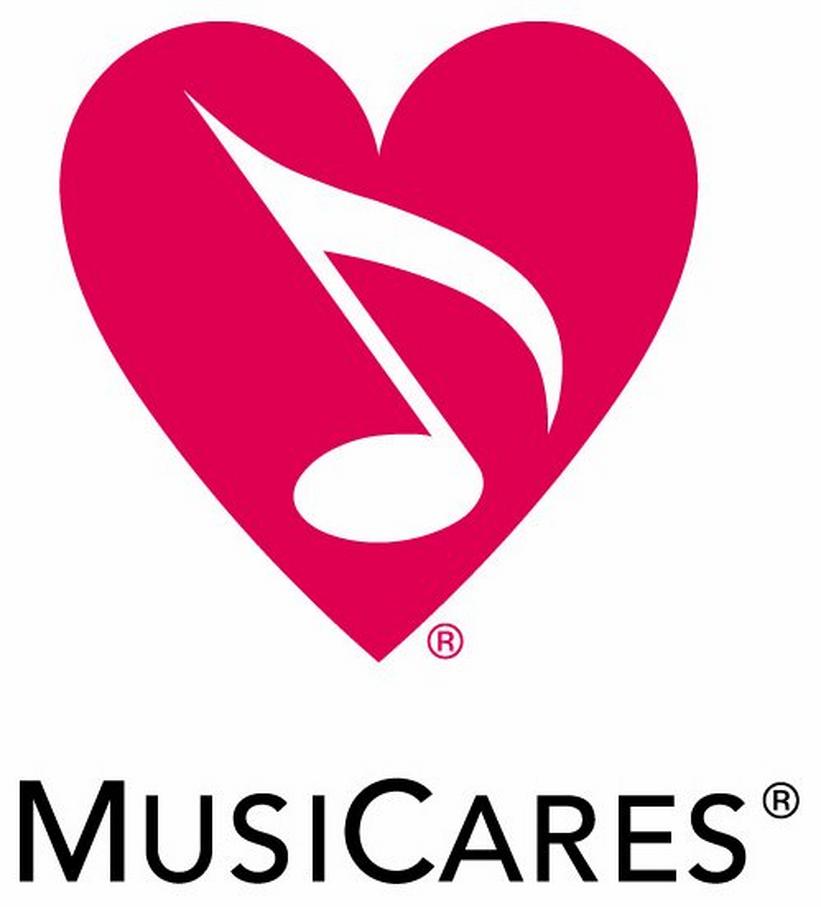 MusiCares has announced its 20th Anniversary Campaign fundraising effort with a $5 million matching gift from the ELMA Music Foundation and a significant gift from Olivia Harrison and the Material World Foundation in memory of George Harrison. The overall fundraising goal of the campaign is $15 million.

MusiCares ensures that music people have a place to turn in times of financial, medical and personal need by providing programs and services, including emergency financial assistance, educational workshops, flu shots, hearing tests, and medical/dental screenings. Additionally, the MusiCares MAP Fund allows ongoing access to addiction recovery treatment and sober living resources for members of the music community regardless of their financial circumstances, including Safe Harbor Rooms, weekly addiction support groups and the MusiCares Sober Touring Network. In its first 20 years, MusiCares has served 65,000 clients, awarded 18,000 grants and provided $24 million in funding to members of the music community.

"The MusiCares 20th Anniversary Campaign is an opportunity to create a legacy for our future and long-term resources for the music people we serve," said Neil Portnow, President/CEO of The Recording Academy and MusiCares. "We thank all of our leadership donors for their generosity, and we want to highlight the ELMA Music Foundation and Olivia Harrison and the Material World Foundation for their extraordinary gifts that represent both sides of the music world — the industry professional and the artist."

"It is a privilege to honor George with a gift to MusiCares' 20th Anniversary Campaign," said Harrison. "Music was his life as it is for all fellow musicians. They and their families deserve the support of those in a position to assist during difficult times. MusiCares has brought together a great community of friends bonded by music and compassion. George would appreciate having this gift made in his name."

"The music world is a remarkably diverse gathering of people — from those who stand in the spotlight to people who work behind the scenes — all of whom are equally important to the music ecosystem," said Branca. "And MusiCares has been providing help to this entire community for many years."

"The MusiCares 20th Anniversary Campaign is designed to set an example of 'giving back' from the spectrum of individuals who have benefitted from working in an industry that rewards creative excellence," added Ostin. 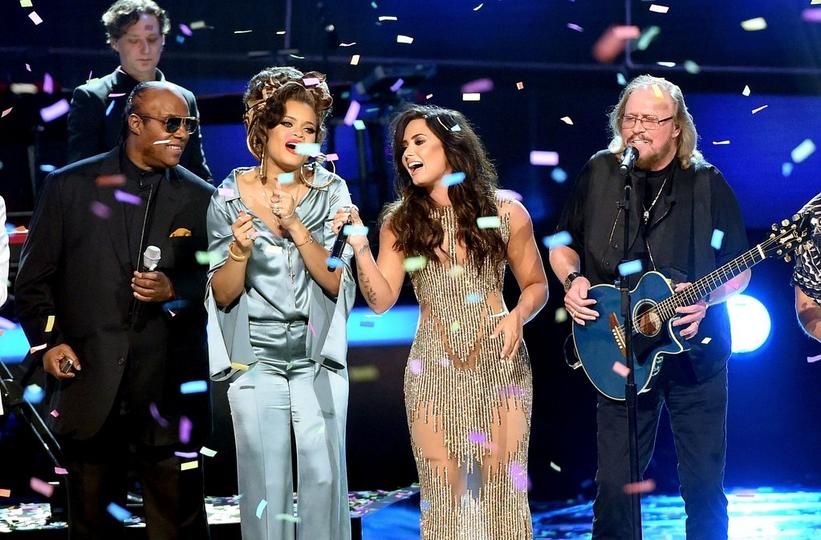 Continuing a trend of presenting must-see tribute specials honoring music greats, The Recording Academy and CBS celebrated the songbook of the Gibb brothers with "Stayin' Alive: A GRAMMY Salute To The Music Of The Bee Gees" on Easter Sunday.

Did you miss the Bee Gees GRAMMY special? Watch it online at CBS.com

According to The Hollywood Reporter, the Bee Gees GRAMMY special was the top ratings draw on Sunday evening, averaging 10.3 million viewers and a 1.2 rating among adults 18–49.

Who was the big draw? In addition to performances by Celine Dion, DNCE, Demi Lovato, Keith Urban, John Legend with Stevie Wonder and many more, the two-hour celebration culminated with a performance by the lone surviving Bee Gee, Barry Gibb, during a dazzling finale that included the group's iconic Saturday Night Fever hit "Stayin' Alive."

This ratings success builds on the momentum of previous GRAMMY specials, including "Stevie Wonder: Songs In The Key Of Life —An All-Star GRAMMY Salute" and "The Night That Changed America: A GRAMMY Salute To The Beatles," both of which earned Emmys.

GO INSIDE THIS YEAR'S NOMINATIONS WITH PHOTOS, FACTS AND MORE

(INTERACTIVE INSTRUCTIONS: MOVE YOUR MOUSE OVER THE GRAPHIC TO REVEAL INTERACTIVE MEDIA)

Sneak peak: See who's paying tribute to the Bee Gees

From Celine Dion and Ed Sheeran to Stevie Wonder and Little Big Town, check out the exclusive set list for "Stayin' Alive: A GRAMMY Salute To The Music Of The Bee Gees" airing April 16 at 8 p.m. ET/PT on CBS

No need to rush the stage or buddy up to the sound person. We've got your set list for The Recording Academy's all-star special celebrating the 40th anniversary of the landmark soundtrack to the film Saturday Night Fever and the Bee Gees right here. "Stayin' Alive: A GRAMMY Salute To The Music Of The Bee Gees" airs this Sunday, April 16 at 8–10 p.m. ET/PT on CBS.

But first, take a sneak peek at the star-studded lineup of artists and the classic songs they'll perform during this once-in-a-lifetime tribute TV special:

Tune in: Celebrate the Bees Gees on April 16 on CBS