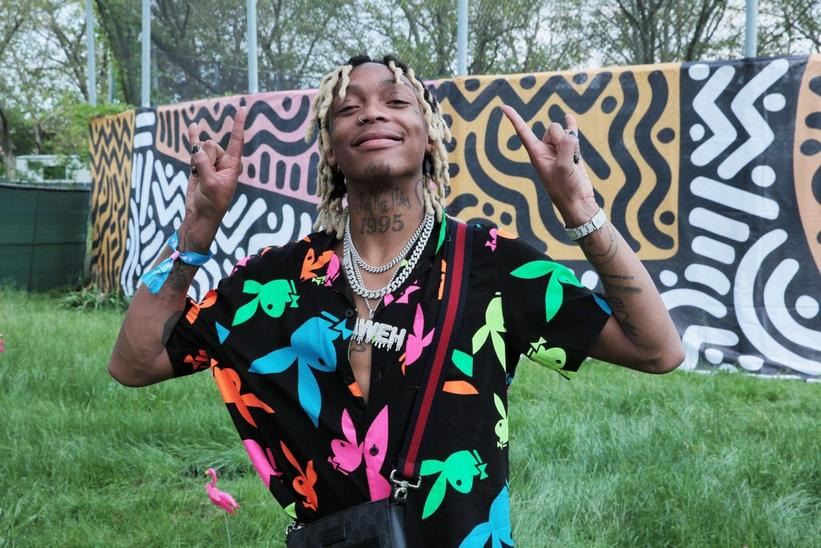 Rising Artist Tyla Yaweh On Performing At Gov Ball, Going From Being Homeless To Touring With Post Malone & More

Nate Hertweck
|GRAMMYs/Jun 1, 2019 - 05:20 am
Want to know what it’s like to go from being basically homeless, living in your car in Los Angeles, to touring the country with Post Malone? Just ask Tyla Yaweh, the rising charismatic artist from Orlando, Fla. who got signed to Malone's label after making his move to the City of Angels. When asked how he classifies his music, Yaweh doesn't. It's the kind of music that doesn't fit in any one genre box, he says.
And there is no better proof than in his debut album, Heart Full Of Rage, which features the highly streamed singles "High Right Now" and "Gemini." Infuenced by artists from Jimi Hendrix to Lil Wayne, Yaweh, whose love of fashion doesn't go unnoticed either, brings together his love for hip hop and rock organically.
We caught up with the the rising rap star backstage at Governors Ball in New York City on the day of his birthday to talk about what went into Heart Full Of Rage, where he gets his wild style from, and how he’s spending his birthday tonight in NYC (hint: it involves bottle service).
Tyler, thanks for taking the time. What's your impression of Governors Ball so far?
I don't know what to expect yet so I'm just out here living the moment and enjoying every second. It's a beautiful day. Hopefully, we don't get rained on, and I'm here interviewing with you guys right now, with the GRAMMYs, so it's cool.
I have to start with A Heart Full Of Rage, your debut album. How long was this in the making? Is this your whole life in one album?
I've been working on it for about like two years, but it was like, we had so many records, so we just put the first 10 records that I felt comfortable with and put them in one project, so it was cool. Took a minute to put it together and structure it the right way.
You've had a crazy ride, man. You were living in your car in Los Angeles. Now you're touring with Post Malone. That's a transformation that not a lot people see in the music. What has that journey taught you?
I learned to just stay humble and just enjoy every little moment in life. Like, no matter what is, I appreciate the small things, the big things. I just love life and I love humans. That's all I do, I just appreciate life because I couldn't be here today, I wouldn't be here today, if I didn't just go through all those moments.
You teased Heart Full of Rage 2 on Twitter. Can you tell us any update? What are you working on?
Man, I can't say nothing. You guys are trying to get me to tell them myself, bro. It's coming, it's coming though. I've been working on it right when I got off tour, I started working on it again. Some was done already.
I got to ask you about your style influences, because you got style, man.
I got my Hugh Hef recipe, Hugh Hefner. I got him going on. And it's my birthday, so I feel like a Playboy. I just love dressing in fashion, and it makes you feel good every day. Whatever you wear, just express yourself through clothes. So that's how I do it.
What does Tyla Yaweh do on his birthday in New York City? What's that party?
What I do is, I go to the club and order 24 bottles of Belaire.