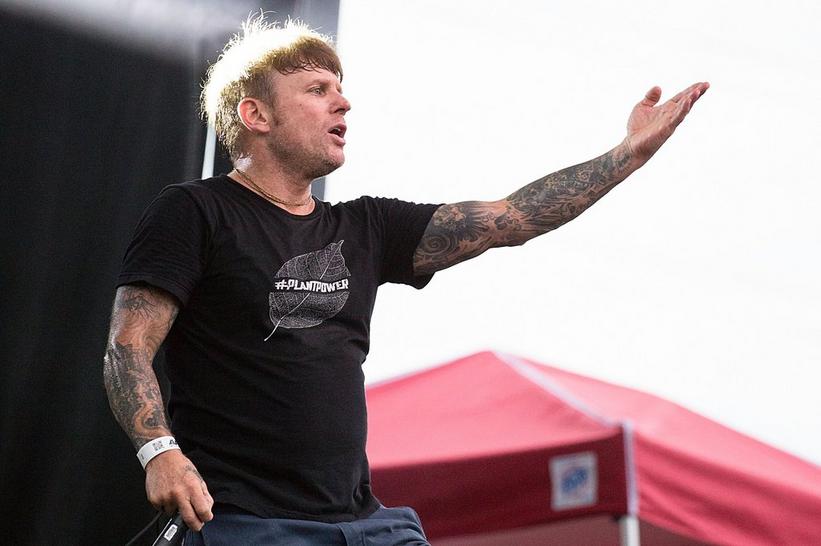 From Punk Rocker To Motivational Speaker: The Surprising Evolution Of Angst

If you ever find yourself in New York's East Village in search of a good vegan restaurant, you might make your way into The Organic Grill on 1st Avenue between 7th and St. Marks, order their famous "Triple J" pulled jackfruit sandwich and be halfway done with your organic espresso smoothie before you even realize this is the favorite eatery of Cro-Mags frontman-turned triathlete motivational enthusiast John Joseph. Even then, a copy of Joseph's controversial get-fit vegan book on a stand in the corner of the room or a tip-off from the waiter, who mentions that "the Triple J" is named after Joseph, might be the only giveaway.

Joseph makes his impact and his living these days delivering motivational, mantra-based talks every bit as intense—and probably even more life-changing—as the music he made with underground hardcore heroes, Cro-Mags, who released their seminal album, The Age Of Quarrel, in 1986. This progression from riot inciter to pious inspirer is actually quite a natural one, according to a recent Mel Magazine piece, which points out Joseph is not the only former punk channeling aggressive energy into motivational speaking.

The most obvious—and famous—example is GRAMMY winner Henry Rollins, who fronted Black Flag and Rollins Band, earning a nod for Best Metal Performance for "Liar" for the 37th GRAMMY Awards the same year he won for Best Spoken Word Recording for his reading of Get In The Van: On The Road With Black Flag. Rollins' 1995 performance of "Liar" might have marked a symbolic shift, opening the door for a generation of fiery punks to reignite their voices. Rollins has spoken to audiences all over the world and even campaigned for political causes such as LGBT rights and hunger relief.

Mel Magazine makes mention of several other outspoken hardcore legends who are, as they put it, "on the upper end of 'all ages'," including Rollins' good friend Ian MacKaye of Minor Threat and Fugazi (age 56) and Earth Crisis frontman Karl Buechner (age 47), who has been a strong proponent of animal liberation and veganism throughout his career. For these and so many more, punk has always been an unexpected medium for social discourse.

“Hardcore is still by and large a social experiment,” says Greg Bennick of the band Trial, who has taken stances on feminism, LGBT rights, immigration and veganism in his career. “It’s constantly in a state of transformation and by no means has arrived at a final point or reached a state of total grace. It always has issues and problems that are in need of examination, but what people not involved in hardcore could find — if they looked beyond the screaming and stage dives — is a generally connected group of individuals trying to make something work where nothing existed before.”

The piece also points out contemporaries of Joseph who are leading motivation workshops such as Ray Cappo of Youth of Today and Shelter (who now goes by Raghunath after becoming a celibate monk for six years and eventually a yogi), and Toby Morse of H20, who started a non-profit organization called One Life One Chance to inspire students to make heathy choices and live a drug-free life.

Not all of these powerful calls for change are coming from men, however. Maria Sherman, senior writer at Jezebel, cites Kathleen Hanna of Bikini Kill and Le Tigre and Alice Bag of The Bags as two voices well worth listening to as alternatives to Joseph, even if just as a matter of personal opinion. Either way, the idea that there is actual benefit in these messages is real, although not automatic.

“At the risk of losing all of my street cred, I do believe there’s a way to usher in progressive, punk ideologies into schools, corporations and wellness conferences" says Sherman. "There’s nothing wrong with retired punks teaching their good book of pit politics, but it’s wrong if they’re crossing a line that exploits real, true community work.”

As Mel Magazine writer Jason Diamond sums it up, "As the people who came up in the scene apply [punk's] principles to life coaching, the results show just how varied, positive and destructive hardcore can be."