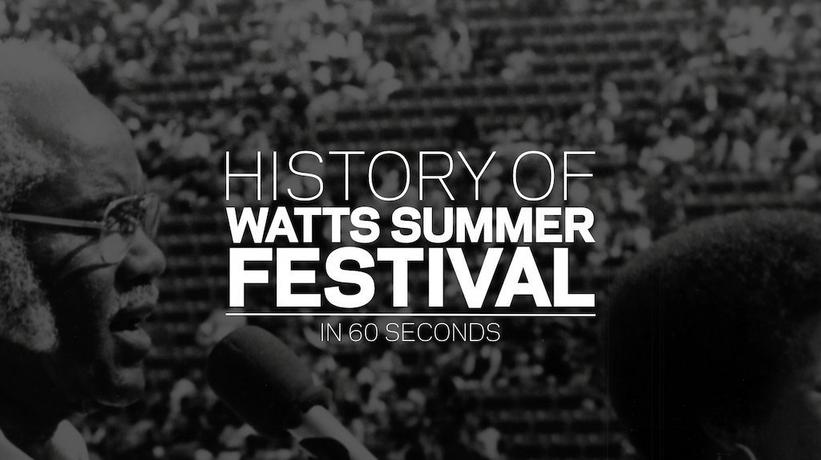 In the inaugural episode of our newly launched History Of video series, GRAMMY.com explores the seminal Watts Summer Festival, a grassroots event founded in 1966 in Los Angeles that's celebrated Black heritage and culture for more than 50 years

In mid-1965, the City Of Angels was recovering from the pain and trauma of the Watts Rebellion, a series of violent riots that ravaged Watts, a predominantly Black neighborhood in South Los Angeles.

The riots began after a minor traffic stop turned into a full-on melee between police officers and the surrounding crowd, which grew increasingly angrier by the cops' heavy use of force against those involved in the incident and innocent bystanders. The altercation sparked a six-day revolt, taking place Aug. 11-16, 1965, which would later become known as the Watts Rebellion, also known as the Watts riots and the Watts Uprising.

The riots made a severely detrimental impact on Watts: Involving some 34,000 people total, the uprising ultimately left 34 people dead, most of them Black citizens, and resulted in 1,032 injuries and 4,000 arrests. By the time the riots concluded, 1,000 buildings were destroyed, causing $40 million in damages. At one point, the Watts Rebellion was "the largest urban rebellion in the United States in the 1960s," according to BlackPast.org.

Looking to recover from the violent episode, members of Watts and other Los Angeles-area communities wanted to focus on healing.

Enter the Watts Summer Festival, which GRAMMY.com explores in the inaugural episode of our newly launched History Of video series.

Watch the debut episode below.

Founded in 1966 by community activist and Watts native son Tommy Jacquette, the Watts Summer Festival launched as a celebration of Black heritage and culture. Self-described as "one of the positive outcomes of the 1965 Watts Revolt," the event is one of the earliest urban community festivals in Los Angeles.

Throughout the decades, the festival has featured icons from the Black community, including U.S. Rep Maxine Waters, GRAMMY-nominated singer-songwriter Charles Wright, renowned funk drummer Frankie "Kash" Waddy (Parliament-Funkadelic, James Brown) and boxing legend and activist Muhammad Ali, the latter of whom served as the festival's grand marshal in 1967. (U.S. politician and activist Sargent Shriver, the founder of Peace Corps and the "architect" of the War On Poverty, was the festival's inaugural grand marshal in 1966.)

In 1972, the Watts Summer Festival and founder Jacquette partnered with the seminal Stax Records to produce Wattstax, a benefit concert commemorating the seventh anniversary of the Watts Rebellion. Held at the massive Los Angeles Memorial Coliseum on Aug. 20, 1972, Wattstax featured a stacked lineup comprising the label's star acts, including The Staple Singers, Isaac Hayes, The Bar-Kays and others, as well as civil rights activist and politician Jesse Jackson who delivered his "I Am Somebody" speech. Known as the "Black Woodstock," attracting more than 100,000 mostly Black concertgoers, the Wattstax concert produced the double-LP album, Wattstax: The Living Word, and the Golden Globe-nominated documentary, Wattstax, both of which were released in 1973.

To this day, the Watts Summer Festival continues to honor the history and culture that make the Black experience unique and special. The event's regular activities and attractions, which include dancers, arts and crafts booths, musical acts and informational displays, spotlight the African, African American and wider Black diaspora. The event also features the beloved festival parade and the Miss Watts Beauty Pageant.

Still held annually on the second weekend of August, the anniversary of the Watts Rebellion, the Watts Summer Festival, which celebrated its 50th anniversary in 2016, remains a beacon of hope and a celebratory relic for a community that proudly rose from the ashes and continues to prosper.

'Black Gold' At 50: How Nina Simone Refracted The Black Experience Through Reinterpreted Songs