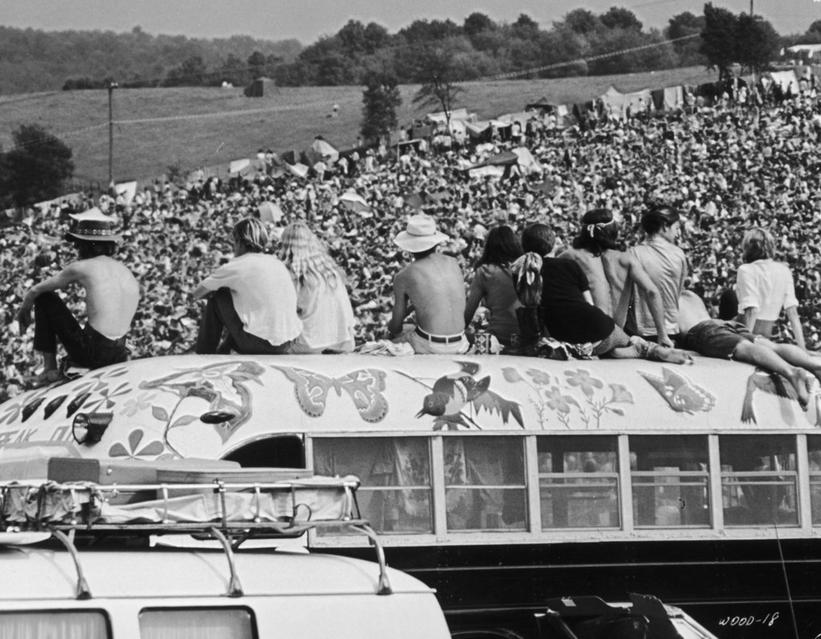 As the golden birthday of the historic music festival approaches, available rooms in Sullivan County for Aug. 15–18 are already in limited supply, even before the lineups or major details for either event have been announced

Judging by the rapid rate hotels and Airbnbs are been being booked in Sullivan County, the site of the iconic ’69 Woodstock Music And Arts Fair, music fans from around the world are ready and excited to celebrate the historic fest's 50th birthday.

Two music festivals will take place on the anniversary weekend, one unofficial at the Bethel Woods Center For The Arts, and an official 50th celebration at a to-be-announced venue, hosted by organizers of the original event.

If you want to take part in the magic of the Woodstock 50th anniversary events and stay in Sullivan County during the long weekend of Aug. 15–18, you should think about booking a room soon. The Times-Herald Record Of Middletown reports that hotels, Airbnbs and everything in between have been booking up quickly, even before official news of an anniversary event had been revealed last month.

The newspaper also shared that many places to stay near the Bethel Woods Center—the venue which now lives at the site of the original event—are already completely booked with already-lengthy waiting lists. One hotel, which is still under construction and set to open this summer, is already fully booked with a waitlist, and shared that their first guest inquiry came in two years ago.

"There's a lot of interest on the domestic front and the international front, whether you were there in 1969, or just want to be here today," said Sullivan County Visitors Association CEO Roberta Byron Lockwood.

In terms of how exactly you can relive Woodstock in Upstate New York this August, the two major events are the aforementioned Bethel Woods Music and Culture Festival, hosted by Live Nation, INVNT (a "global brands communication agency") and Bethel Woods Center. Meanwhile, Michael Lang, the co-creator of the original event, has just confirmed an Official Woodstock 50 Celebration. Further details and a location are yet to be revealed.

The organizers of the Bethel Woods Festival describe their three-day event as a "pan-generational music, culture, and community event" with "live performances from prominent and emerging artists spanning multiple genres and decades, and TED-style talks from leading futurists and retro-tech experts." Attendees will get to visit the venue's year-round Woodstock-centric museum which will feature special new 2019 exhibit called We Are Golden: Reflections On The 50th Anniversary Of The Woodstock Festival And Aspirations For An Aquarian Future.

"50 years ago, people gathered peacefully on our site inspired to change the world through music," said Darlene Fedun, Bethel Woods Center CEO. "As the stewards of this historic site, we remain committed to preserving this rich history and spirit, and to educating and inspiring new generations to contribute positively to the world through music, culture, and community."

Lang, who was one of the main promoters for Woodstock '69 and has been hinting at an official 50th anniversary event for some time, confirmed minimal details with the Poughkeepsie Journal, who on Dec. 19 wrote that Lang had "definite plans" for an anniversary concert not held at the original location.

On Dec. 30, Woodstock Ventures, which runs the official Woodstock website and works with Lang, shared a statement from the co-founder:

"While the original site in Bethel remains close to our hearts, it no longer has the capacity to hold a real Woodstock Festival. I'm delighted that Bethel Woods is doing events in the coming year to celebrate what we brought to life in 1969," wrote Lang.

However you choose to celebrate Woodstock's 50th anniversary, Sullivan County is ready to welcome you this summer with peace and love vibes, complete with 36 fiberglass dove statues painted by local artists in '60s-inspired colors.

Just make sure to book a place to stay sooner rather than later, unless you want to relive the memories of many would-have-been-Woodstock-goers stuck on Route 17B, aka Woodstock Way.