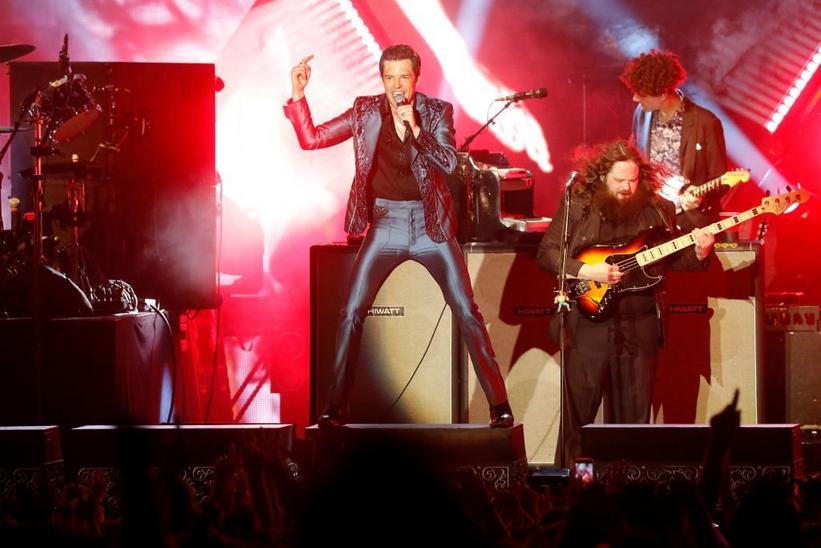 Brandon Flowers of The Killers

The band also shares details about their upcoming album and additional tour dates on their already sold-out U.K. and U.S. runs

Ahead of their forthcoming album Imploding The Mirage due out May 29 via Island Records, GRAMMY-nominated rock group The Killers have shared the album’s lead single, "Caution."

Imploding The Mirage is the band's sixth studio album and the first album they've written and recorded since departing from their hometown in Las Vegas. Produced by the band along with Shawn Everett and Jonathan Rado of Foxygen, the album features collaborations from kd lang, Weyes Blood, Adam Granduciel of The War On Drugs and others.

Check out the new single "Caution" below:

In a sit down with Zane Lowe on Apple Music, frontman Brandon Flowers expanded on the biggest evolution between "Caution" and the lead single "The Man," from their previous full-length Wonderful Wonderful, released in 2017.

“We experimented a little bit on the last album. We're proud of ‘The Man’ and all that it did, but the heart wasn't quite there,” Flowers told Zane Lowe. “I was being a little ironic with ‘The Man’ and I think we're at our best when we're bearing our hearts and we're kind of doing that on ‘Caution’.”

Further, Flowers and drummer Ronnie Vannucci gave insight into the underlying themes of "Caution," their reset after moving away from Las Vegas and how the song actually came about.

"It's sort of about having the wherewithal to listen to that angel on your shoulder, even if they're telling you something that you don't want to hear," said Flowers. "I think for me with this song was a lot about leaving Las Vegas. I was having this sort of hunch or impression that that was something that I was supposed to do for my family. And it was hard for me because I'm an ambassador for - And so it was tough for me to leave, and I thought I was able to harness that energy and there was a sort of a relief when it happened, and you kind of feel that the spirit in 'Caution,' I feel like."

The song features a guitar solo courtesy of Fleetwood Mac’s Lindsey Buckingham, which according to Vanucci, landed on the song by coincidence after the band couldn’t refuse the ending riffs that Buckingham had put down. "He did all the sort of famed tricks where we were recording to tape, so we slowed the tape at half speed or quarter speed, and then he did guitar playing," he noted. "That’s how you get those sort of crystal-ly high tinkle sounds. And then he just slayed a solo at the very end of it. And at that time, the song, we didn't really have an ending for it, so it just kind of went on. But his solo was just too good, so we just made the ending as long as his solo."

This May, The Killers will embark on their largest global tour yet, making stops in Europe, the U.K., Canada and the U.S. along the way. The run of shows will kick off on May 26 at KeepMoat Stadium in Doncaster, U.K. and will run through stops in London, Madrid, Sydney, Las Vegas and Mexico City before wrapping with a Dec. 4 show at the Estadio 3 De Marzo in Zapopan.

You can pre-order Imploding The Mirage ahead of its release here. While U.K. and European stops are already sold out, tickets for the U.S. and Canadian shows will go on-sale this Friday (March 13) at 10 a.m. local time. Tickets can be purchased here.