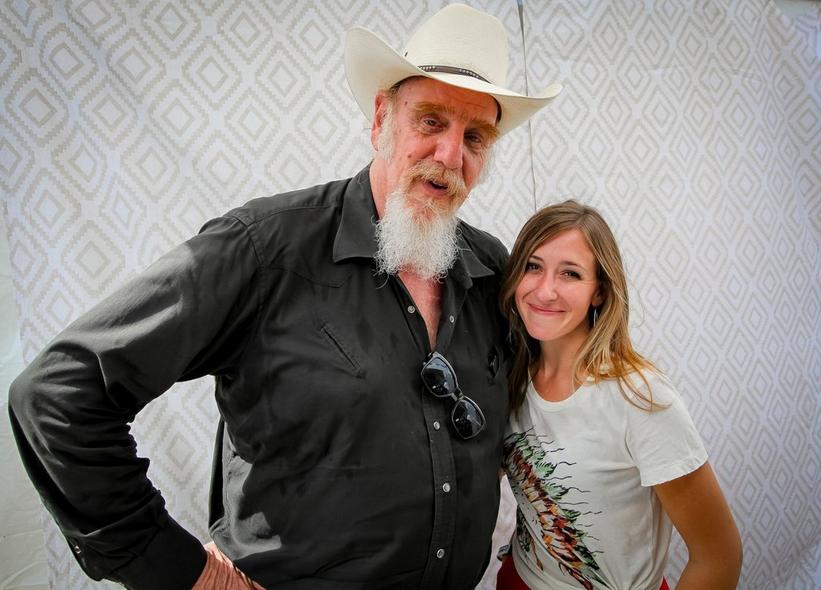 Asleep At The Wheel

Western swing might not be what it is today without one man: Ray Benson. Since founding Asleep At The Wheel in 1970, Benson has shaped the modern iteration of the classic genre. The group's latest effort, New Routes, is injected with the fresh voice and fiddle chops of Katie Shore and shows Benson and crew at their finest, bringing the format he helped popularize and evolve into a whole new age and in front of a new audience.

We sat down with Benson and Shore backstage at Austin City Limits (ACL) to discuss the band's matchless legacy, the memorable moments of making their new album, how they came to collaborate with the Avett Brothers on a song about Willie Nelson, and more.

Can you tell us what's behind the title of the new album, New Routes?

Benson: The idea was that there's new pathways, but we are a roots American band and that's always been our handle.

It's a great title and album—what do you feel you accomplished that was new for Asleep at the Wheel on this album?

Benson: Well, Katie, for one, she shares the vocals and writing chores with me and so that's what it's all about [.] I've had so many wonderful people in the band, over 100 people for 48 years, and so when Katie joined and Dennis [Ludiker], the other fiddler, and then Connor [Forsyth] on the piano, they all contributed things, and Josh [Hoag] on the bass, so there was a new bunch that had new ideas that I could work with.

Katie, your stamp on this album is unmistakable. Are there moments or songs on it that stick out to you as favorites?

Shore: I love the whole record. It was a lot of fun, and I kind of can't believe that it's out. We put our heart and soul into this record, but I really love this, and I'm totally biased cause it's the song that Ray and I wrote, but "Call It A Day Tonight" I think is my favorite. I love that it's so rooted in swing, and the fact that we wrote it together, and I live in a really small town outside of Austin, so we love it. We love playing that every night.

Can you tell us a little bit about how you wrote that together?

Benson: I had an idea for a song and she had an idea for a song and the two met. And then, as I've said before, co-writing usually you gotta be in the same room with the person. Well, she and her husband live out there in the middle of nowhere and I live in town, and so we would text each other, and you can sing into your dang phone now, and so, I'd play a guitar thing, and she'd send everything back and forth and that's how we finished it. But the idea was about a song about somebody late at night in Austin, Texas, looking for love when the lights go down.

I heard you say somewhere that Willie writes like that also with via text.

Benson: Yeah, with Buddy Cannon. Yeah, that's how he writes.

Reminds me of the song on your new album, "Willie Got There First," with the Avett Brothers - how'd that come together?

Benson: Seth and Scott [Avett] are friends of ours and Seth sent me that song. He's a song writer so, and we share ideas and I went "Man, that's an incredible song, I mean gosh." So I played it for Willie. It's an homage to Willie Nelson and what a great song writer he is and how we're not jealous but we're all going "Oh well, that idea, throw that out the window because Willie already wrote that song." So I played it for Willie and I said, "What do you think?" He went, "It's so hard to be humble." [laughs]

He's so funny and so, I call Seth back and we had booked the date with the Avett Brothers and Asleep at the Wheel at the Long Center in Austin, Texas. And I said "Let's record it." The next day he went, "Yeah, okay." So, that was the deal.

You and your band have pioneered western swing, and brought this music to a lot of new people. Can you talk a little bit about the style?

Benson: Well, it's Texas music. It was born in Texas, Oklahoma, and California, and in the southwest in the '30s, '20s, '30s, and '40s, and kind of disappeared, and so we started [it back up]. My first record was a Bob Wills tune in 1973, and here we have Katie Shore who is 30-years-old and she's playing western swing, along with dozens of other fiddlers, singers, songwriters that are not on the mainstream pop but there is a, what, I'd say 10 or 20 bonafide western swing bands in California,

Shore: Yeah, so there's a lot.

Benson: [all over] America, back east New Jersey, in Belgium. So, it's kind of like bluegrass was, it caught on in a way and it's alive and kicking.

Shore: It's timeless and it helps too that Scott and Seth love western swing and the Old Crow Medicine Show, and when I was growing up one of my very favorite records was "Asleep at the Wheel," but all of my favorite country singers, the Dixie Chicks, they were all playing these tunes and so it all, it connected the dots and I think for younger generations, you know, the Avett Brothers being so into it, or Old Crow, I mean, I think it's always going to resonate, you know. It seems like people that love music find it; even if it's a matter of time. That's my two cents.

Shore: It's pretty great. I used to come to ACL. I remember one year it was super muddy. It's always hot and sweaty. I would come for the whole weekend. And it's been really neat to actually be on stage and it's an honor, but we have a great time and we love doing hometown gigs so this is kind of the best of both worlds for sure.