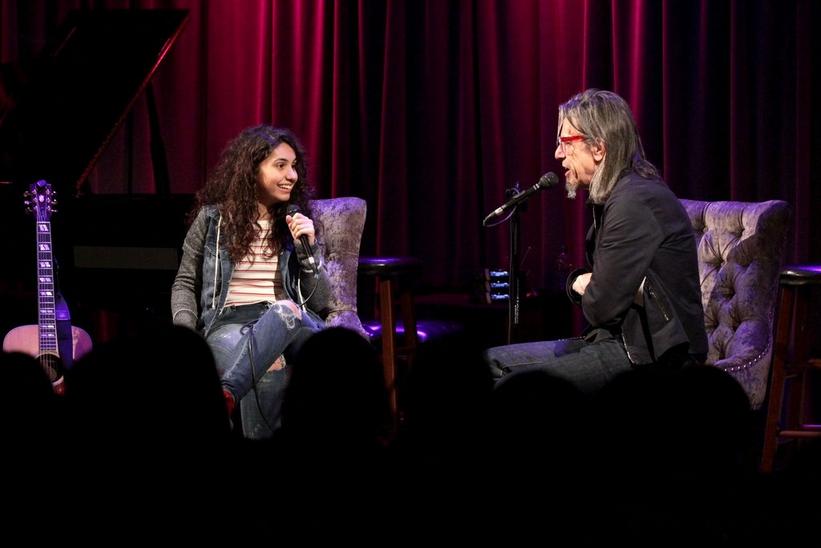 The Canadian singer/songwriter opens up about her songwriting inspiration, how she tackled her shyness and the great advice she received from Coldplay's Chris Martin

Alessia Cara's incredible musical journey has taken her from singing YouTube covers from the comforts of her closet to winning Best New Artist at the 60th GRAMMY Awards. On this week's episode of the GRAMMY Museum's "Required Listening" podcast, the Canadian singer/songwriter revealed how her dreams for a career in music were clouded early on by performance anxiety.

"Growing up, it was a lot harder for me to share my ideas and be creative, even just singing in front of my own parents. I was very, very shy," said Cara. "I protected that side of me a lot and I'm not really sure why. I think maybe it was just the fear of not being good enough or failing. When something's that precious to you it's always really scary to give it away and to just lay it out there."

The pragmatic Cara turned to technology — namely, YouTube — to get her music out. On her channel, the then-teenager posted covers of songs by the likes of Justin Timberlake, Justin Bieber, Maroon 5, and Amy Winehouse, ultimately garnering millions of collective views.

"The closest thing to singing for an audience was doing it in a way that I didn't have to actually be in front of them," said Cara. "I thought, 'YouTube!' [I'll] use my resources as a millennial. I have this great thing called the Internet.'"

During her conversation with GRAMMY Museum Executive Director/host Scott Goldman, the GRAMMY winner also shared her experience in working with producer/songwriter Sebastian Kole on her debut album, 2015's Know-It-All, the recording of her hit "Here," why Winehouse is a constant source of inspiration, and the useful piece of advice she received from Coldplay's Chris Martin.

Released as the debut single off Know-It-All, "Here" suddenly was everywhere in charting in the top 40 in Australia, Canada, Netherlands, New Zealand, and the United Kingdom. In the U.S., it reached all the way to No. 5. But did Cara and her collaborators know she had something special on her hands?

"We were all just kind of like, 'This is pretty cool,'" Cara said. "I think all of us were feeling the same thing but none of us wanted to be the one to say that, 'We have the song.' … But we all had that mutual feeling of, 'We have something here. This is the one.'"

One of Cara's major influences is the late Winehouse, whose sheer ability as a pure singer still provides a fountain of inspiration today.

"I've seen [Amy] so many times," said Cara. "One of the reasons why I look up to her so much, and why I look up to the people I look up to in the music world, [is] because they're able to [sing] without anything else. They can just sit there and just sing for you and still move you with no music and no anything. That's something really special to be able to do that. So that's what I've always strived for."

Cara's personal songs and own powerful voice have taken her to the some of the biggest stages in the world and winning one of the most coveted GRAMMYs on Music's Biggest Night. During her stint opening for Coldplay, Cara received an important piece of advice that she still takes to heart.

"Chris Martin basically [told me], 'The crowd always gives you what you give them. So, if you give them all your energy and all your love and you try to connect with them as much as possible, then usually they'll give that back to you. It's like a conversation.'"