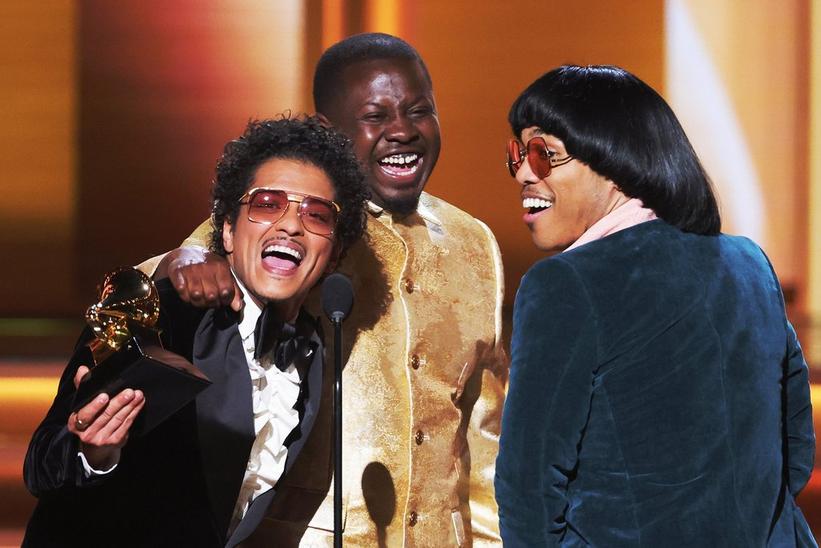 With four wins at the 2022 GRAMMY Awards, Bruno Mars didn't just add to his pile of golden gramophones — he cemented himself as a GRAMMY legend

The 2022 GRAMMYs proved successful for Bruno Mars and Anderson .Paak, who — together as Silk Sonic — won all four GRAMMYs for which they were nominated. After claiming Best R&B Performance (a tie with Jazmine Sullivan), Best R&B Song and Song Of The Year, they topped off their four-for-four night with Record Of The Year.

"We are really trying our hardest to remain humble at this point," .Paak joked as they accepted their last award. "But in the industry, we call that a clean sweep!"

What Mars' fans may not have realized, though, is that his sweep wasn't just limited to the 64th GRAMMY Awards. Bruno Mars has won 15 GRAMMYs overall — and 13 of those have come since 2016.

Bruno's GRAMMY legacy extends beyond his wins, with 30 nominations spanning several categories as well as some of the show's most memorable performances. As he celebrates his latest wins, take a look at Bruno Mars' impressive GRAMMY resume.

Believe it or not, Mars had an even bigger GRAMMY night in 2018. He took home six golden gramophones that year with 24K Magic, which won Album Of The Year and Best R&B Album. The LP's title track won Record Of The Year, and the hit single "That's What I Like" scooped up Song Of The Year, Best R&B Performance and Best R&B Song.

He took home his first Album Of The Year trophy the year before that, but not for his own work. Mars's producer group, the Smeezingtons, produced (and co-wrote) Adele's "All I Ask," a track from 25, which won Album Of The Year in 2017.

Before his streak began, Mars won Best Pop Vocal Album for Unorthodox Jukebox in 2014, and Best Male Pop Vocal Performance for "Just The Way You Are" in 2011 — his first-ever GRAMMYs.

"Nothin' On You" — which he also co-wrote with The Smeezingtons — nabbed Mars a Best Rap Song nomination. Two years later, he received another nod in the category for co-writing "Young Wild & Free," a collab with Wiz Khalifa and Snoop Dogg.

What's more, the Smeezingtons helped earn Mars nominations for Producer Of The Year, Non-Classical in 2011 and 2012. Along with "F*** You" and "Nothin' On You," their 2011 nod came from production on songs like Travie McCoy's "Billionaire" (featuring Mars) and Mars' Own "Just the Way You Are." Their 2012 nomination was the result of their production on Mars' Doo-Wops & Hooligans as well as songs by Far East Movement and Lil Wayne.

Thanks to his classic style and powerful voice, Mars has also been part of two tributes to late legends. In 2017, he helped honor Prince alongside Morris Day and the Time. Dressed in a (very fitting) sparkly purple blazer, Mars delivered a rousing rendition of "Let's Go Crazy" that included a solo on one of Prince's iconic cloud guitars.

In 2021, Mars teamed up with .Paak for a tribute to Little Richard. As .Paak played drums, Mars delivered a rocking medley of "Long Tall Sally (The Thing)" and "Good Golly, Miss Molly."

Who knows how long Mars' winning streak will last, but regardless, he's already cemented himself as a GRAMMY legend. It's probably safe to say that as long as Bruno Mars continues to make music, the GRAMMYs will leave the door open.