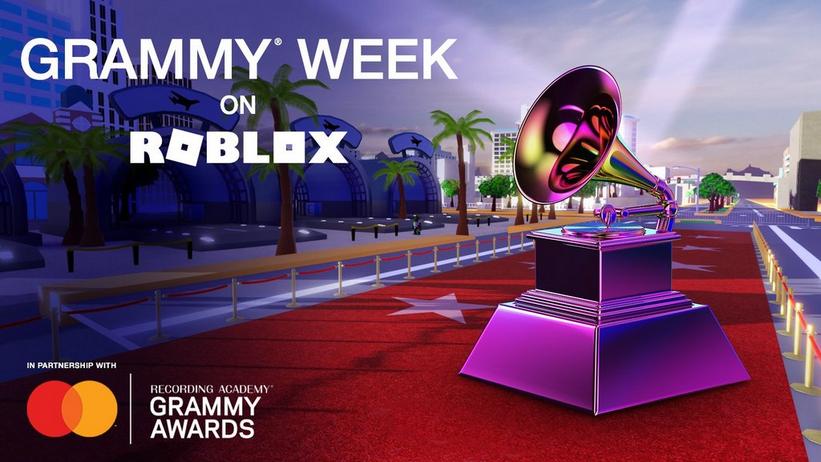 The inaugural GRAMMY Week on Roblox will include a special performance by Latin recording artist, GRAMMY nominee and Latin GRAMMY winner Camilo

The Recording Academy has announced its official GRAMMY Week activations: GRAMMY Week on Roblox. Roblox is a global platform where millions of people gather every day to imagine, create and share experiences with each other in immersive, user-generated 3D worlds. The Las-Vegas-themed experience — in line with the 2022 GRAMMYs, officially known as the 64th GRAMMY Awards, which take place in Las Vegas for the very first time — will be held virtually from Wednesday, March 30 through Sunday, April 3. The partnership marks the Recording Academy's debut into the Metaverse and is Roblox's first brand-funded music activation.

Mastercard's multi-sensory branding approach is rooted in connecting to people in new environments, like the Metaverse. Users will see Mastercard branding and hear its sonic DNA integrated into the GRAMMY Week on Roblox experience.

GRAMMY Week on Roblox kicks off on Wednesday, March 30, on Roblox.com and via the Roblox app. You can participate in the GRAMMY activations and follow along from home anywhere in the world.

Below is the GRAMMY Week on Roblox schedule of events and experience features:

"We are thrilled to partner with Roblox for our first-ever official GRAMMY Week experience in the Metaverse," Recording Academy Co-President Panos A. Panay said. "We are always looking to innovate and reach music lovers wherever they are, and there is no better partner for us to accomplish this than Roblox. Online gaming platforms are quickly becoming one of the most important music discovery channels for tens of millions of fans. As an Academy, it's our priority to continue broadening where and how our members connect with audiences around the world. Plus, my 8-year-old twin daughters think this is amazing."

"The GRAMMY Awards are iconic and we're delighted to bring the hottest music show of the year to fans across the globe," Jon Vlassopulos, vice president, global head of music of Roblox, said. "We're thrilled to be featuring Camilo, our first Latin virtual concert performer on Roblox, giving the community new music and genres to discover."

"When Roblox approached me, I immediately got very excited because this was the first time in my life that I would be doing something like this," Camilo said. "I'm also grateful that I'll be able to bring this unique experience to La Tribu, especially during GRAMMY Week. I was already incredibly honored to be one of this year's nominees, and to perform in a completely new way in the Metaverse brings it to a whole new level. I can't wait!"

"This marks the first of many immersive, multi-sensory experiences we plan to bring to life in the Metaverse," Raja Rajamannar, chief marketing and communications officer of Mastercard, said. "As the No. 1 sonic brand and as a longstanding and passionate supporter of the music industry, we are thrilled to be teaming up with the Recording Academy. Likewise, we're delighted to be partnering with Roblox to harness the power of technology and education with this one-of-a-kind GRAMMYs event for music fans in the virtual realm."

Join the GRAMMY Week on Roblox Experience from Wednesday, March 30 — Sunday, April 3, on Roblox.com or via the mobile Roblox app.

The Recording Academy will present the 2022 GRAMMYs on Sunday, April 3, airing live from the MGM Grand Garden Arena in Las Vegas, on the CBS Television Network and streaming live and on demand on Paramount+ from 8–11:30 p.m. ET / 5–8:30 p.m. PT. Prior to the telecast, the GRAMMY Awards Premiere Ceremony and the GRAMMY Live special will be streamed live on live.grammy.com and the Recording Academy's YouTube channel.

Where, What Channel & How To Watch The 2022 GRAMMYs Awards Show