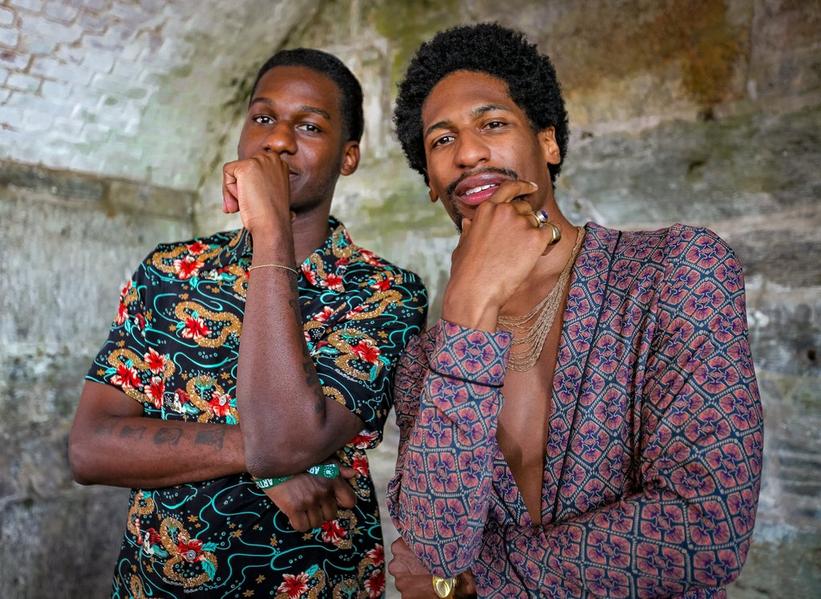 Go Backstage With Us At Newport Folk Festival 2018

Join us behind the scenes at Fort Adams State Park in Newport, R.I., for the country's most historic folk festival

This year's Newport Folk Festival was full of fantastic music, friendly faces and special surpises right up to Sunday night's spectacular festival-closing "A Change Is Gonna Come" revue featuring soul star Leon Bridges and masterminded by Jon Batiste with the Dap Kings. They were joined on stage by a host of incredible guests - collaborations that could only have happened at Newport. You had to be there to believe it!

Newport Folk festival boasts an unmatched combination of tradition, innovation and good ole' fashion community. GRAMMY.com was on the ground in Newport, R.I., for one of the most eclectic — and electric — years in the festival's storied history. Take a look to see who rocked the stage and who dropped by to visit us backstage.

Sunday headliner Brandi Carlile dropped in to discuss everything from the powerful messages of By The Way, I Forgive You to her love of fishing before she tore up the stage.

Folk legend John Prine paid us a visit to talk about his wildly successful new album, The Tree Of Forgiveness, before rising star Margo Price dropped in to say hello. With a stellar album currently making waves in the americana music world and a recent cameo in Prine's "Knockin' On My Screen Door" video, we had plenty to talk about with the pair of master songwriters.

The incredible Amanda Shires wowed the audience by performing songs from her upcoming album, To The Sunset.

Lukas Nelson and his band, Promise Of The Real, rocked Newport hard on Saturday. After their set, he stopped by to chat about the many, many projects he's working on and snap some portraits with us.

New Orleans musical institution Preservation Hall Jazz Band arrived in style, dressed fresh in white and bearing instruments. We sat down with bandleader Ben Jaffe to talk about the musical message they take with them everywhere they go.

We asked JD McPherson all about his latest album, Undivided Heart & Soul, focusing on his fuzz-heavy single, "Lucky Penny" and the soulful "Crying's Just A Thing That You Do," with he co-wrote with fellow Newport Folk performer Butch Walker.

Meet Becca, Brittany and Jesse of Bermuda Triangle, a new trio from East Nashville who turned an impromptu jam into a real deal band. The ladies came by to tell us how they started playing music together and talk about their experience at Newport Folk.

Surprise! This year's suprise headliner on Saturday night of Newport Folk Festival was none other than Mumford & Sons. The band made their first ever appearance at Newport, and called up a host of guest including Maggie Rogers, Brandi Carlile, Phoebe Bridgers, and more.

Jazz/folk duo Tuck And Patti stopped by after they kicked off day one of the festival to talk about what makes Newport so special, their upcoming projects and even drop some advice on making it as a musical duo and a married couple.

Hot off the release of Please Don't Be Dead, Oakland, Calif., neo-blues hotrod Fantastic Negrito had some wise words to share backstage about true artistry, the good vibes at Newport and where he keeps the GRAMMY he received for Best Contemporary Blues Album at the 59th GRAMMY Awards for The Last Days Of Oakland.

Jess Wolfe and Holly Laessig of Lucius showed up in stunning matching blue to talk about their latest "acoustic" album, Nudes, why they love coming back to Newport and what they're working on next.

While we were chatting with Alejandro Rose-Garcia, aka Shakey Graves, his friend and ours, Paul Cauthen, dropped in to talk about the Newport hijinks he'd been getting into so far and how the festival is the perfect setting for connecting with all of their closest musical friends.

St. Vincent closed things down Friday night with a haunting set, proving Newport Folk is, and has always been, about pushing the limits.

Ever since college, Rachael & Vilray have shared a love for '30s and '40s traditional jazz. The duo came through to talk about the Newport experience, reveal what makes the music they love so enduring and pose for our cameras.

Sidi Toure tears up the stage on day one, bringing the Newport Folk Fest crowd to their feet.

Hot off the stage, New Orleans' Tank And The Bangas pulled up to take a quick snapshot and tell us how excited they were to share their music with the equally excited – and receptive – Newport crowd.

MC Taylor of Hiss Golden Messenger came through after his set to talk about the natural way his Halelujah Anyhow album came together and how being a father has meant everything to him as an artist.

The ever-entertaining Valerie June stopped by to talk about the incredible vibes at Newport and breakdown one of her most cosmic songs, "Astral Plane."

Thirty Tigers artist Tyler Childers shared his impressions of Newport Folk as well as some insight on his 2017 album, Purgatory.

The magnetic trio The Lone Bellow paid a visit to our corner of the fort to talk about Walk Into A Storm and tell the touching story of "May You Be Well."

Apropos of being situated right on the water at Newport's Fort Adams State Park, the Wood Brothers discussed the various water themes and symbols that flow through their latest album, One Drop Of Truth.

The musical journeyman Phil Cook swung by to see us and talk about why he loves Newport Folk Festival, his new - and first - solo album, People Are My Drug, and why now is a crucial time in music's history.

Stay tuned for much more to come from Newport Folk Festival 2018.