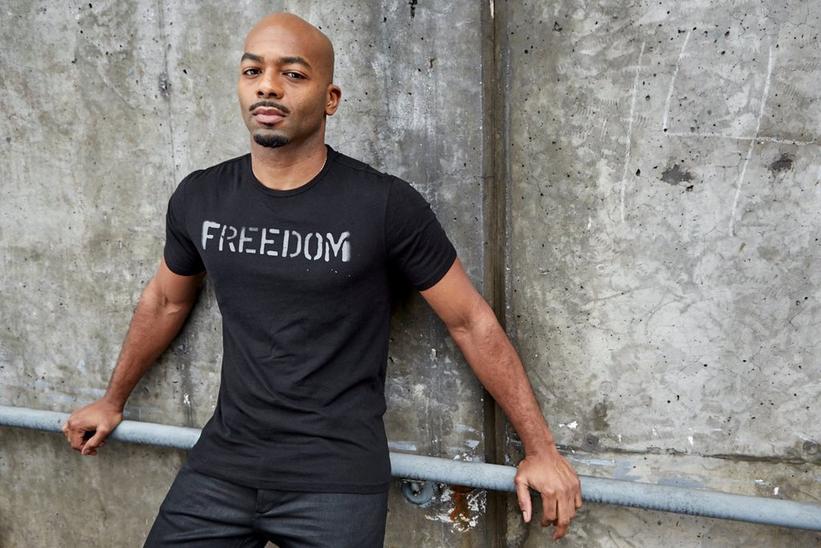 When "Jesus Christ Superstar Live In Concert" aired on April 1, fans of both the classic Andrew Lloyd Webber and Tim Rice musical and its modern all-star cast rejoiced. While viewers recognized the marquee recording artists who appeared, for many it was Judas who stole the show. The man behind that role? Brandon Victor Dixon, an accomplished actor and two-time Tony and GRAMMY nominee who has just released his first single, the uplifting and unifying "We Are."

Originally from Washington, D.C., Dixon has performed on Broadway in "The Color Purple" and "Hamilton," on television in "One Life To Live" and "Law & Order," and on stages from Los Angeles to New York to London. A true Renaissance man, Dixon formed his own production company two years ago to develop film and TV content. But his arrival as a recording artist is anything other than your typical stage-to-stereo crossover, and "We Are" is much more than a mere single.

"I'm not necessarily building a recording career," says Dixon. "I'm a very philanthropically oriented individual. There are a lot of causes that I support, and I'm a big fan of advocacy. In this day and age, I feel like if you're not advocating for somebody or something then you have to ask yourself what you're doing. I feel like the more we speak for and support others, the less we'll have to worry about speaking for and supporting ourselves."

To that end, "We Are" represents a message of equality and compassion Dixon hopes to share with the world. The song originated when fellow actor Daniel J. Watts asked Dixon to write something to go along with a performance he was doing at a benefit event. Dixon crafted the hook and the rest fell into place with the help of South African producer Greg Dean Borowsky.

Next, Dixon walked the walk and chose Young New Yorkers, an organization aimed at enrolling sentenced juveniles in arts programs instead of sending them to jail, as the beneficiary of the single's proceeds.

"It's creating the #WeAre movement and the song is really designed to get people to remember that there's no you without me, there's no me without you and remember that, at one point, we knew how close we were as human beings together on this planet," says Dixon. "This first movement and this first song is about children, and the children that are caught up in our for-profit justice system."

Dixon speaks passionately about several different philanthropic efforts, including mass incarceration, gun control, LGBTQ issues, racial equality, and feminism. Music provides him with an avenue to reach people and advocate for these causes.

"I started writing music over the last couple years, particularly when I was doing 'Motown.' I started to connect with people in the music industry, and Ryan Shaw, who played Stevie Wonder in that show, and I started working on some projects together," says Dixon. "Then this year, coming off of 'Hamilton' and going into 'Jesus Christ Superstar,' I just felt it was time to start putting out some music."

Dixon's "… Superstar" experience put him shoulder to shoulder onstage and in living rooms around the world with GRAMMY winners such as John Legend.

"It was really awesome to see someone like John … voluntarily step out into a slightly more foreign territory and be just as dedicated and giving of himself and, beyond that, to stretch forward to drive himself into a new creative territory," Dixon says. "You don't see that in everybody who is established and comfortable with what they've built.

"He was excited by all the wonderful work happening around him. John produced it, and he was very proud and excited about the overall project and the reaction to it."

Dixon's breakout performances of "Heaven On Their Minds," "Superstar" and "The Last Supper," a pivotal confrontation with Legend, introduced him to a whole new audience. While he cites Sara Bareilles' beautiful rendition of "I Don't Know How To Love Him" as among his personal highlights, choosing his top moment of the night comes easy.

"Coming out in a bedazzled tank top and silver jeans and singing 'Superstar' with a 36-piece band and 28 dancers around me is one of the dopest things I've ever had the opportunity to do," says Dixon.

The adrenaline rush of taking the stage was no doubt magnified by the performance being broadcast live on television. Though  Dixon's initial approach to his role as Judas and the show was not unlike his prior work on Broadway, the live filming element added another layer of technical wrinkles.

"We want everybody at home to feel what we're doing live in the arena, and it seems like they really succeeded at that," says Dixon. "The storytelling and the heart came through, and that's largely because of the technical ability of the group we had around us."

The hard work was worth it, as the show Dixon calls "a permanent part of our cultural artistic fabric" made a huge splash with TV audiences, spurring a host of acclaim from critics and the public alike.

"I think the best thing somebody said to me was, 'The way you portrayed Judas and the way this production told the story, it makes me think about the world around me in a very different way,'" says Dixon. "That's moving for me, because, for this show, you walk into it labeling Judas as a villain, and evil and bad, and the goal for me was to strive to make people feel differently about someone they thought they knew. And hopefully that will translate to the real world where you can think differently about people around you that you think you know … maybe even help you think a little differently about yourself."

With so much under his belt already as an entertainer, it's clear Dixon's true purpose moving forward is all about enacting positive change, a daunting task for any artist. Naturally, maintaining a balance is also important.

When he's not onstage or in the studio, Dixon says he can be found playing pickup soccer in New York City or snagging a stack of comic books and a bag of Twizzlers to unwind. But he's quick to assure us more music and videos are in the works, all aimed at showing the world we are one.

"My message is very democratic, so hopefully that's the spirit in which people will receive it and will feel happy to share it."