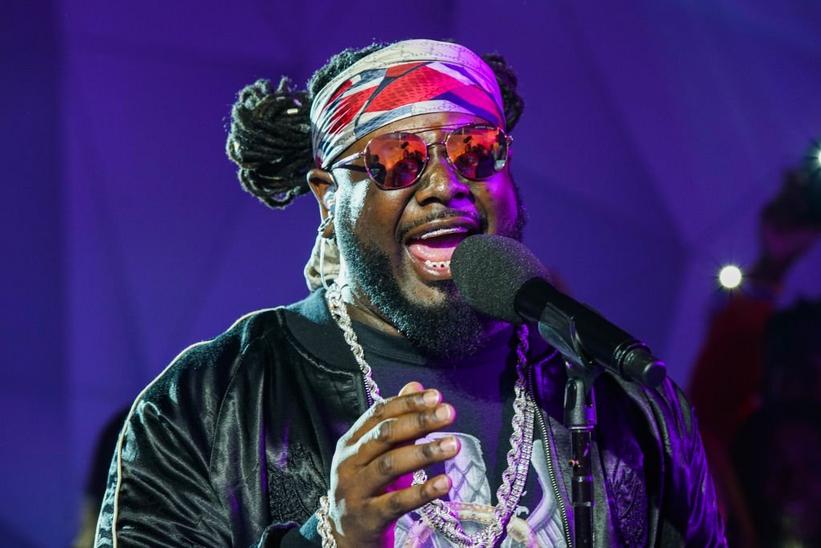 The Florida rapper, who masqueraded as the Monster over the course of the show, capped off the competition with a performance of Montell Jordan's 1995 classic "This Is How We Do It"

Fox's smash music show The Masked Singer, in which disguised celebrities compete in a televised singing contest, has at last drawn to a close, with the final singer being, well, umasked.

After last night's finale, the final singer was revealed to be none other than rapper and two-time GRAMMY winner T-Pain, who had been dressed as "The Monster" and performed a rendition of Montell Jordan's classic 1995 party anthem "This Is How We Do It."

In third place last night was multiple GRAMMY winner (and Super Bowl 2019 opener!) Gladys Knight, who had been dressed as "The Bee."

In second place was classic-pop icon Donny Osmond, who had been dressed as "The Peacock."

Where Do You Keep Your GRAMMY: T-Pain On What His GRAMMY Wins Mean To Him 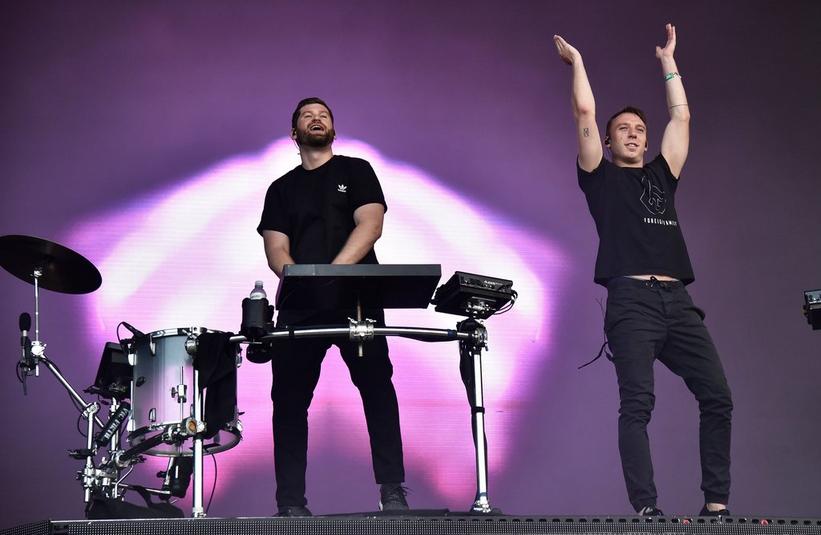 Electric Forest Festival is officially returning to Rothbury, Michigan June 27-30, 2019, for a long weekend of dancing among trees and lasers. The fest has announced the lineup, which includes GRAMMY-nominated ethereal electronic duo ODESZA, tropical house DJ/producer Kygo and bass music heavy-hitters Bassnectar and Zeds Dead as the headliners.

HQ is proud to present the official lineup for #EF2019: https://t.co/bLvAY8GgsI pic.twitter.com/4DSu6kkwPC

The event is scaling back to a one weekend event from two the past two years and on top of the plenty of electronic artists and jam bands, also has some hip-hop artists to round things out. The jam band contingency is led by The String Cheese Incident, an Electronic Forest mainstay, who will be offering three performances over the weekend. Others include the Floozies, Lettuce and Twiddle, plus STS9, who blurs the line of electronic music, psych-rock and even hip-hop and could really fall in either category. GRAMMY winner T-Pain represents the smaller hip-hop contingency, along with rising female rapper Tierra Whack.

In addition to plenty of music to keep you dancing in the forest all weekend long, the event also offers a "Curated Event Series," yoga classes, silent disco, plus a VIP lodge camping offering. The full lineup plus more info on ticket options are available on Electric Forest's site. 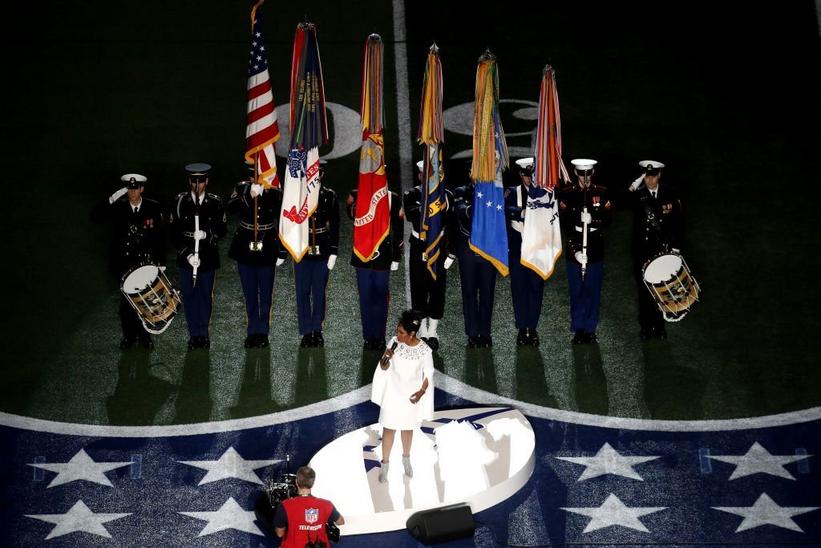 The Empress Of Soul Gladys Knight opened Super Bowl 2019 in her hometown of Atlanta with a powerful rendition of the National Anthem.

The seven-time GRAMMY winner had previously noted that she "pray[ed] that this National Anthem will bring us all together in a way never before witnessed... and we can move forward and untangle these truths which mean so much to all of us."

She also noted last month that, "I am here today and on Sunday, Feb. 3 to give the Anthem back its voice, to stand for that historic choice of words... the way it unites us when we hear it and to free it from the same prejudices and struggles I have fought long and hard for all my life."

Knight's statement, which was released last month upon announcing her plans to sing the Anthem, touched on the current division this year's Super Bowl and the NFL in general has had in the music community. The NFL reportedly had a tough time booking its halftime talent this year due to the controversy surrounding former 49ers backup quarterback Colin Kaepernick.

Maroon 5 is confirmed to perform at the haltime show with special guests Big Boi and Travis Scott.

Antenna For The Stars

Will the current landscape of music-based TV shows continue to yield a crop of pop stars?

Has video killed the radio star…again? The Buggles' video of the same name famously launched MTV in 1981, and 30 years later television is continuing to make its unique mark within the music world.

Music and TV have been partners in creating pop stars since the dawn of the medium in the late '40s, when the popular radio show talent competition "The Original Amateur Hour," hosted by Ted Mack, segued to the small screen, helping to launch the careers of Gladys Knight, Ann-Margret and Pat Boone, among others. Programs such as "The Ed Sullivan Show," a variety show featuring musical acts that ran until 1971, and "Star Search," a talent show debuting in 1983, continued the trend. But it wasn't until "American Idol" debuted in 2002 as a Fox summer replacement series that the concept reached critical mass.

Based on the UK pop series "Pop Idol," which was a spinoff of the Australian show "Popstars," the idea behind "American Idol" was a singing contest, judged by industry professionals, in which the viewers voted for the winner by phone and text. The show was a success from the very start, averaging 12.7 million viewers per episode as that summer's highest-rated show in the 18–49 demo. By 2006 "American Idol" was attracting an average of 31.7 million viewers per episode, while the next year's season premiere peaked at 41 million viewers.

Since those heady times, "American Idol" viewing had been eroding precipitously, and before this year's 10th season, returning producer Nigel Lythgoe made several significant changes, including hiring new judges Steven Tyler and Jennifer Lopez to join original judge Randy Jackson, signing on industry veteran Jimmy Iovine as a mentor, and lowering the eligibility age for contestants to 15. The moves helped stabilize ratings, with May's finale averaging 29.3 million viewers and a 9.2 rating in the 18–49 demo, up more than 21 percent in viewers and 12 percent in ratings compared to last year. It was the first time the finale received such a viewership bump in five seasons.

"It became tune-in television again," says Shirley Halperin, music editor for The Hollywood Reporter and author of the show's authorized history, American Idol: Celebrating 10 Years. "You wanted to hear what wackiness would come out of Steven Tyler's mouth next."

"American Idol"'s success has spawned a group of similar music-based shows, including NBC's "The Voice" and "The Sing-Off," a show for a cappella groups featuring Sara Bareilles as a judge; Bravo's "Platinum Hit," a competition for songwriters; Simon Cowell's new show "The X Factor," scheduled to debut in September; and arguably the most successful music show of all time, the fictionalized music-based comedy drama "Glee." Each show has arrangements with major music companies to help break discovered talent, including Sony Music Entertainment ("The X Factor," "Glee" and "Platinum Hit") and Universal Music Group ("American Idol" and "The Voice").

Featuring GRAMMY-nominated recording artist Jewel as host and ex-"American Idol" judge Kara DioGuardi, "Platinum Hit" is Bravo's pop tunesmith answer to "Top Chef" and "Project Runway." Jes Hudak, a singer/songwriter from Saratoga Springs, N.Y., who was a contestant on the show's first season, says it has been a boon for her career.

"The whole goal is exposure, and getting my music to the people it's going to mean something to," says Hudak. "We get such harsh feedback from people in the industry, and what really matters are the people who listen, buy your music and connect with what you're saying."

While major labels are on the receiving end of previously vetted talent, artists that already have name recognition and legions of Facebook and Twitter followers, platinum sales for TV show contestants and winners isn't a given. Does the show's democratic voting process result in a lowest-common-denominator winner, preventing what truly makes a musical superstar — something unique and compelling and sometimes even off-putting? And while "Glee" has sold millions of downloads and albums, has anyone yet emerged from its cast as a superstar?

"It's no longer about record sales," says Halperin, who points to Adam Lambert as an example of a unique "American Idol" alumnus. "You have to think about Broadway, 'Glee,' making a viral video, blogging about 'American Idol,' [or] becoming a Fox News correspondent covering the show. If you didn't win, you have to be willing to embrace your past."

What separates "American Idol" from its competition is the glimpse of transformational reality we get into how pop stars are groomed, allowing the audience to become vested in its chosen favorites' destiny.

"Scotty McCreery started out as [someone] who couldn't even carry on a conversation," says Halperin about "American Idol"'s season 10 winner. "Fourteen weeks later, he was this engaged, charming and media savvy professional who's being molded into a potential country star."

It is precisely that feeling of emotional involvement the other music competition shows are also trying to convey.

"The competitive atmosphere is not for everybody," says Hudak. "I wanted to show enough of my personality so people could relate to me as a human being as well as an artist. This is a way to really push my skills. It's all about pure feedback, growth and getting better."

With shows such as "American Idol" now producing artists who have been fans from the show's beginning, it makes it much more difficult to find where reality ends and artifice begins, especially in a landscape where these series are proliferating.

"The traditional route of becoming a pop singer is not an option for [new contestants]," observes Halperin. "Their problem is the 120 finalists who came before them, and have had that much more time in the media and public consciousness. The smart ones take the [money] they make from the ['American Idol'] tour and put it in the bank."

While the current industry climate presents a mountain of challenges for aspiring pop stars, music TV shows will likely continue to be a magnet for them.

"It gives you the best possible chance to succeed," says Halperin. "But a lot of things have to come together for it to ultimately happen."

(Roy Trakin has been senior editor at HITS magazine since he still had hair, and has written for every defunct rock publication that did and didn't matter. He is also the author of biographies on Jim Carrey, Tom Hanks and Sting.) 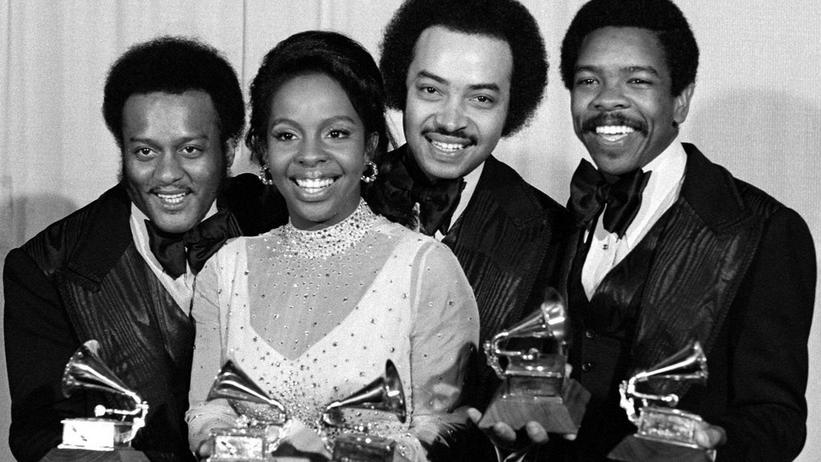 Gladys Knight & The Pips at the 1974 GRAMMYs

Back in 1973, pivotal Atlanta soul and R&B group Gladys Knight & The Pips released their powerful No. 1 hit "Midnight Train To Georgia." The following year, they performed a rousing rendition at the 16th GRAMMY Awards, with Knight stunning in a shimmering gown and The Pips showing off their perfect "Soul Train"-ready dance moves.

Above, in our latest edition of GRAMMY Rewind, watch the Empress of Soul Knight perform "Midnight Train To Georgia" with The Pips at what was clearly a magical 1974 GRAMMYs.

The Atlanta group went on to earn several more GRAMMY nominations over the years and one more win, at the 31st GRAMMY Awards in 1989 in the Best R&B Performance category again. This award went to "Love Overboard," the fabulously synthed opening track to 1987's All Our Love. Knight has earned a total of seven golden gramophones to date, most recently in 2006 for her gospel album One Voice.

Behind The Board: Mike & Keys On Their Special Relationship With Nipsey Hussle, Working With Gladys Knight & More