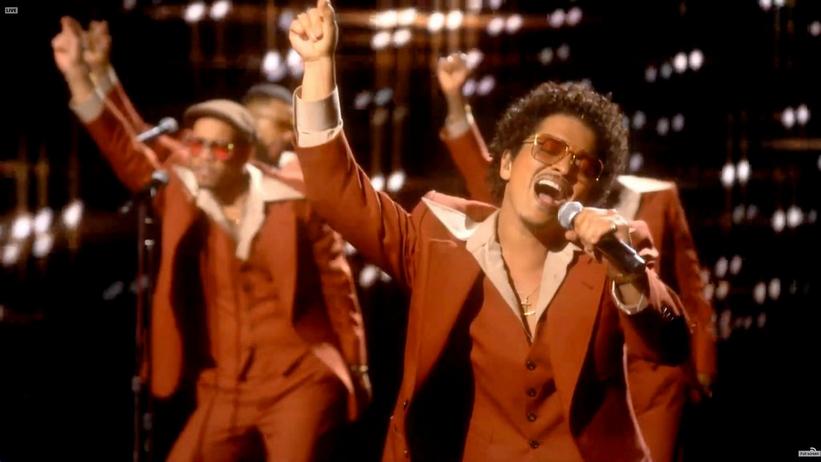 Bruno Mars and Anderson .Paak bring their funk-pop project to life in their newly minted Las Vegas residency, a transportive and soulful experience that kicked off on Feb. 25

"Silk Sonic believes that what happens in Vegas stays in Las Vegas," Bruno Mars informed the crowd in Sin City over the weekend.

Though it's a bit of a cliché, the saying was actually quite fit for the occasion. Silk Sonic — Mars' '70s-inspired joint project with Anderson .Paak — is, at least for the time being, only doing performances in the form of a Las Vegas residency. And with Yondr bags keeping fans from capturing any footage of the show, it really felt like those in the 5,000-cap room were meant to share the experience — exclusively.

The 90-minute show, which is held at Park MGM's Dolby Live, was as much of a disco-tinged affair as one would imagine upon listening to the duo's album, An Evening With Silk Sonic. Complete with sparkly (and, of course, silky) getups and retro choreography, Mars and .Paak crafted a night to remember — even if it couldn't be documented on camera.

Whether you're planning to catch the show yourself or just want a taste of the action, check out some of the takeaways from Silk Sonic's Las Vegas residency.

Bootsy Collins Made An Appearance

Well, virtually. The funk legend — who bestowed the band name on the pair — features on the intro for An Evening With Silk Sonic, which also served as the show opener.

Sporting his signature bedazzled top hat and sunglasses, Collins appeared on an oversized screen to get the party started. "Fellas, I hope you got somethin' in your cup," he said. "And ladies? Don't be afraid to make your way to the stage."

They Relished A Phoneless Experience

After opening with the Vegas-nodding "777" and the gliding groove of "Skate," Mars and .Paak took visible glee in reminding the crowd that they were phoneless — in song form, naturally.

Sure, it was a bummer to not be able to snap a photo of the awe-inspiring staging or capture a video of their smooth moves. Yet in reality, the no-phone policy resulted in an electric atmosphere, one that Mars said he and .Paak envisioned upon creating Silk Sonic: "You made me and Andy's dream come true tonight."

Silk Sonic's infectious energy and upbeat rhythms are enough to get people grooving. But without phones as a major distraction, all there was to do was dance.

From the second Silk Sonic took the stage, everyone from the front to the back row was on their feet. The dancing never stopped on stage or in the crowd, and it made for a full-on party.

The Production Was Transportive

As Silk Sonic had teased with performances on the American Music Awards and the BET Soul Train Awards last year, they bring as much soul to their aesthetic as they do in their music. Between the disco ball that hung over the audience and the velvet suits — capped off by .Paak's fitting mushroom-cut wig — the entire setup was as retro as it could be.

With only 10 songs in the Silk Sonic songbook thus far, Mars and .Paak added a few of their own singles to the set list. .Paak assisted Mars on the bridge of "Treasure," and Mars played drums on .Paak's "Come Down" — something the "That's What I Like" singer claimed he's been wanting to since .Paak's first album in 2014. "Tonight's your lucky night," .Paak quipped.

They Sound Even Better Together In Person

No matter what they were singing, .Paak and Mars' harmonies were even more unbelievable live than on record. Along with ad-libbing several vocal breakdowns during "Fly As Me" and "Smokin' Out the Window," they sang portions of "Put On a Smile" and "Blast Off" a cappella.

It was the night's finale, the GRAMMY-nominated "Leave the Door Open," that really showed just how well they mesh both vocally and personally. It was evident that they not only love singing it, but they have been working hard at perfecting the delivery — and it certainly paid off.

Bruno Mars Seems Happier Than He's Ever Been

When you have a singing partner like the ever-so-smiley Anderson .Paak, it's hard not to be happy. But Mars' ear-to-ear grin throughout the show felt like more than just feeding off of .Paak's good energy.

While Mars has never seemed unhappy on stage, he's also never seemed so in his element as he did alongside .Paak. It was apparent that this soulful music and vintage style is where he thrives, and considering how seamlessly his own music fit into the night's lineup, Mars has clearly found his true musical home.

Las Vegas may be the perfect setting for Silk Sonic, but here's hoping they don't only stay in Vegas. The world needs more Silk Sonic — and it seems like both Mars and .Paak do too.