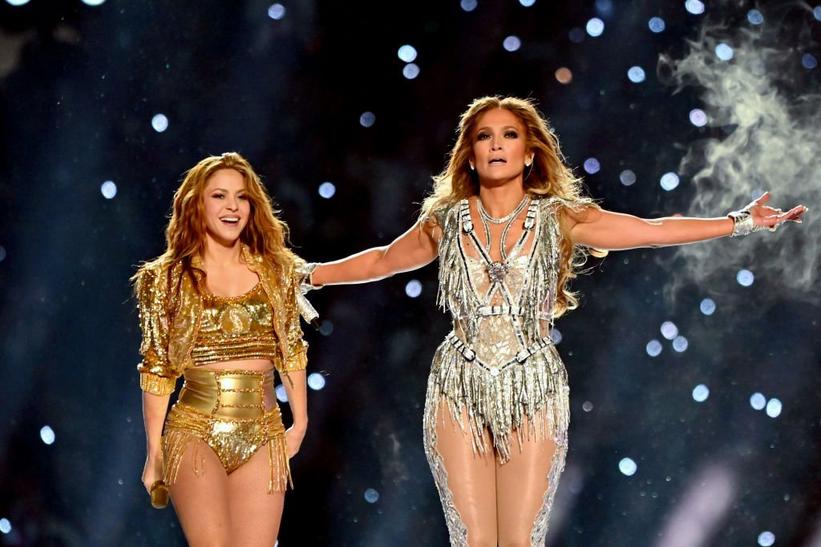 In one of the most highly anticipated music events of the year, Latin pop superstars Jennifer Lopez and Shakira delivered a dazzling, star-studded halftime show at Super Bowl 2020 today (Sunday, Feb. 2). Lopez and Shakira blew through a career-spanning super medley composed of each of the two singers' respective hits from across the decades.

Decked out in a bedazzling, shiny red dress, Shakira kicked off the show with a run of her chart-topping hits in both English and Spanish, including "She Wolf," "Empire" and "Ojos Así." Midway through her set, she whipped out a glittery-red guitar and shredded a portion of Led Zeppelin's iconic "Kashmir" before segueing into her U.S. breakthrough hit, "Whenever, Wherever."

Minutes later, Shakira brought out fellow Latin pop icon Bad Bunny, who was dressed in a blindingly silver suit from the future. Together, the duo performed a mashup of their hit singles, including the GRAMMY-nominated "I Like It," Bunny's U.S. No. 1 hit with Cardi B and J Balvin, and Shakira's "Chantaje," her 2016 collaboration with Maluma, and her internationally chart-topping, GRAMMY-nominated song "Hips Don't Lie."

For her part, triple threat Lopez hypnotized the masses with her era-defining hip-hop and R&B classics, including "Jenny From The Block," "Ain't It Funny" and "Get Right." Climbing up a sky-high dance pole, in a nod to her starring role in the 2019 blockbuster film Hustlers, she then launched into her GRAMMY-nominated dance-pop track, "Waiting For Tonight." In another surprise moment, Lopez brought out Colombian reggaetonero J Balvin, who performed a medley of his tracks, including "Que Calor," his 2019 collaboration with Diplo's Major Lazer and Dominican dembow artist El Alfa, and "Mi Gente," his global hit with Willy William.

The two songstresses then joined forces centerstage for a mashup of their solo tracks, including Lopez's GRAMMY-nominated "Let's Get Loud" and Shakira's "Waka Waka (This Time For Africa)."

With their spellbinding halftime show at Super Bowl 2020, one of the most viewed TV spectacles across the U.S. every year, Jennifer Lopez and Shakira further solidified Latin pop as a dominant force in pop culture across mainstream America.

Prior to the halftime show, Demi Lovato wowed the crowd with a powerful rendition of the U.S. national anthem, and gospel icon Yolanda Adams officially opened Super Bowl 2020 with a beautiful performance of "America The Beautiful."