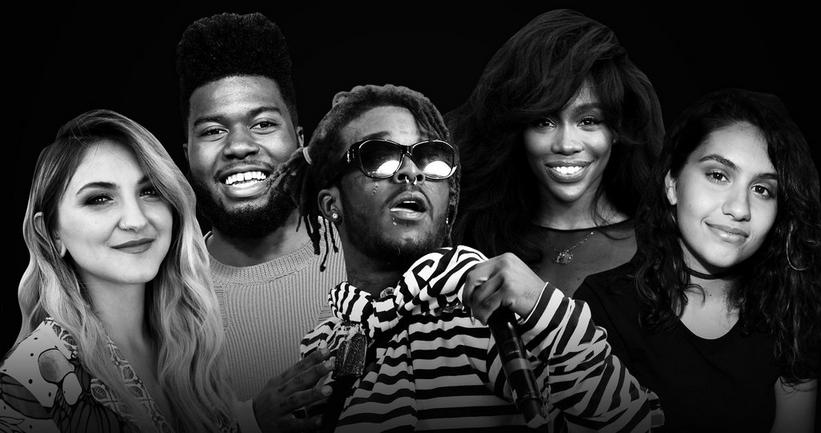 Here Are The Contenders For Best New Artist | 60th GRAMMYs

The Best New Artist category for the 60th GRAMMY Awards is positively stacked with talented creators who have built names for themselves on their own terms.

Some are songwriters who broke into the business penning hits for big-name artists before transitioning into their own solo careers; others are independent phenoms who leveraged their social media followings and artist amplification platforms such as SoundCloud to build a grassroots critical mass that made it impossible for the industry to ignore them.

All five will surely be names to watch in the coming years. Here's a closer look at this year's Best New Artist nominees:

Alessia Cara's debut single, "Here," became a sleeper hit in early 2015, and was dubbed by MTV as the "new song for everyone who secretly hates parties."

Her debut album arrived soon after, with the third radio single "Scars To Your Beautiful" becoming a chart hit late last year when it climbed to No. 8 on the Billboard Hot 100

Leaving no doubt that the Canadian singer has officially arrived, in 2017 she was tapped for some impressive marquee collaborations on Zedd's "Stay" and Logic's "1-800-273-8255." The former is nominated for Best Pop Duo/Group Performance, while the latter is up for Song Of The Year.

Singer/songwriter Khalid's explosive viral success with self-released tracks on SoundCloud saw the young artist tapped for numerous "artists you need to know" lists by publications such as Billboard and Rolling Stone just months after his high school graduation.

His first official single, "Location," released before the end of his senior year. The video collected more than 17 million plays on YouTube by the time his debut album, American Teen, dropped last March, and he promptly sold out every tour date of his 2017 summer tour.

Khalid is also featured alongside Alessia Cara on Logic's Song Of The Year and Best Music Video-nominated "1-800-273-8255."

The 19-year-old is nominated for a total of five GRAMMY Awards this year, with his Best R&B Song-nominated "Location" and Best Urban Contemporary Album-nominated American Teen rounding out his nods.

With a rapid-fire series of mixtapes starting in late 2015 and stemming across 2016, Lil Uzi Vert carved himself a noticeably standout niche into the exploding cloud rap genre. With a sound often meandering between rock and hip-hop stylings, Vert's music has been sometimes called "emo rap," though the 23-year old artist strives hard to avoid genre labels.

During his recent sit-down with Zane Lowe on Beats 1 Radio, Vert was quick to stir the pot when Lowe tried to nail down a name for his sound, summing himself up saying, "I think it's [unidentifiable] … I just pulled up in a UFO, that means I'm an alien. [laughs] That's all I can say."

Lil Uzi Vert is also nominated alongside breakout trap trio Migos for his feature verse on their summer smash hit "Bad And Boujee."

Speaking to the Recording Academy about "Issues," Michaels revealed that the song was originally written over two years previously with the intent of giving away to a songwriting client, but she felt it too personal to give up, and sparked her decision to make the jump into becoming a performing artist.

"I just thought, 'I can't do that. I can't give this song to somebody'," Michaels explained.  "That was my very first feeling of wanting to sing my own words."

Michaels is nominated for two GRAMMY Awards this year, with "Issues" bringing the singer/songwriter an additional nod for Song Of The Year.

SZA began stirring up underground buzz as early as 2012, with her self-released debut EP, See.SZA.Run, which caught the attention of independent hip-hop label Top Dawg Entertainment, which signed her in early 2013.

After releasing a pair of acclaimed EPs over the next two years, Top Dawg kept a tight lid on any and all details about SZA's eventual debut album, Ctrl, which was eventually released this past June. Though the album's success — gold certification and a No. 3 peak position — has resulted in somewhat of a whirlwind for the singer/songwriter, it's given her a new perspective on her fans.

"Being noticed on a very different end of the spectrum is very intense, but it makes me feel like I have a responsibility because I feel like every person that I'm meeting at a meet-and-greet or at a show — or that's listening to my album or that I'm seeing on the internet — I see that they're genuine reflections of me," SZA told GRAMMY.com.

Along with her Best New Artist nod, SZA has also drawn a Best R&B Song nomination this year for "Supermodel."