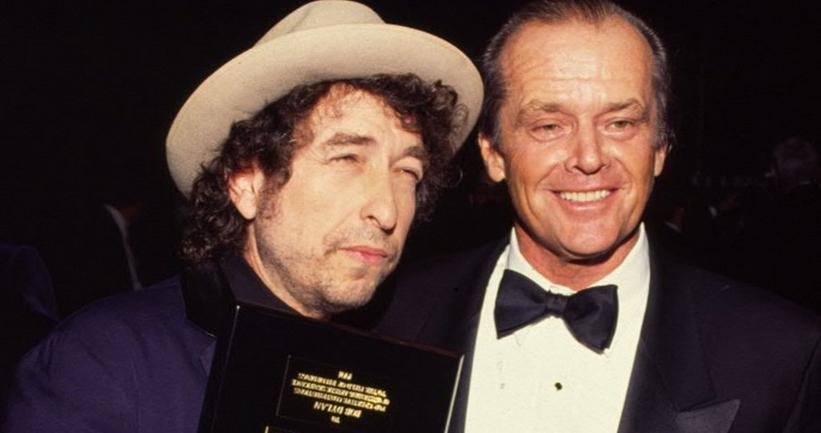 At the 33rd GRAMMYs Awards show, alongside presenter Jack Nicholson, a bemused Dylan responds to the honor by cryptically paraphrasing a Biblical psalm

Bob Dylan has a long history of accepting awards in an offbeat fashion, but his acceptance of the GRAMMY Lifetime Achievement Award in 1991 has to be his most inscrutable—and memorable.

As a starstruck Jack Nicholson introduces him, a purple-suited, fedoraed Dylan anxiously undulates in place; when he receives the honor, he stares at it for several seconds, thought after incredulous thought flashing across his visage.

"Well, um, all right—yeah," he finally allows. "Well, my daddy, he didn't leave me too much, you know? He was a very simple man and he didn't leave me a lot. But what he did tell me was this. He did say, 'Son…' He said..." (An awkward silence, a few scattered giggles.) "He said so many things, you know?" (Uproarious laughter.)

The yuks don't last long. "He said, you know, it's possible to become so defiled in this world that your own mother and father will abandon you," Dylan deadpans. "And if that happens, God will always believe in your own ability to mend your own ways. Thank you!"

What did that paraphrase of Psalm 27:10 mean in the context of the GRAMMYs? Bob knows. Watch the classically weird and profound Dylan moment above and check out more GRAMMY Rewinds here.

Let Freedom Ring With The March On Washington GRAMMY Playlist

On Aug. 28, 1963, Dr. Martin Luther King Jr. stood on the steps of the Lincoln Memorial in Washington, D.C., and declared in his landmark "I Have A Dream" speech, "Now is the time to lift our nation from the quicksands of racial injustice to the solid rock of brotherhood."

In 2012 The Recording Academy recognized King's speech for its historical significance by inducting the recording into the GRAMMY Hall Of Fame. Delivered before 250,000 people, "I Have A Dream" culminated the March on Washington for Jobs and Freedom, a rally organized by a coalition of civil rights organizations that called for the passage of meaningful civil rights legislation and a program to provide jobs, among other demands.

Several artists have used music to call for a solid rock of brotherhood and sisterly love over the years. GRAMMY winners Bob Dylan; Peter, Paul & Mary; and Mahalia Jackson were among the performers who stood beside King at the March on Washington and dared to dream of a better America. On Aug. 28 President Barack Obama — joined by fellow GRAMMY winners such as LeAnn Rimes and BeBe Winans and former Presidents Jimmy Carter and Bill Clinton — will deliver his own speech at the Let Freedom Ring Commemoration and Call to Action bell-ringing ceremony at the Lincoln Memorial, commemorating the 50th anniversary of the March on Washington.

As bells toll throughout the country, we encourage you to let freedom ring by marching to the beat of our March on Washington 50th anniversary GRAMMY playlist.

Peter, Paul & Mary's cover of Bob Dylan's popular protest song was one of two songs performed by the trio at the March on Washington. The two-time GRAMMY-winning track fittingly asked marchers, "How many roads must a man walk down/Before you call him a man?" The answer, of course, was blowin' in the wind.

Considered one of the defining anthems of the civil rights movement, "A Change Is Gonna Come" was released in 1964 by R&B singer Cooke as a response to Dylan's "Blowin' In The Wind." Cooke's harrowing track was voted No. 12 on Rolling Stone's 500 Greatest Songs of All Time list and epitomizes the hope and change King called for 50 years ago.

Although written by Canadian Neil Young, "Ohio" spoke to the outrage many felt over the Kent State shootings in Kent, Ohio, in 1970. The song openly questioned the deaths of four unarmed students who were killed by the Ohio National Guard during a campus Vietnam War protest.

Written by Bob Marley and Peter Tosh, this classic reggae tune was featured on the Wailers' 1973 album Burnin'. The group's signature call to action demanded people "get up, stand up/Stand up for your rights." In 1999 the track was the first reggae song to be inducted into the GRAMMY Hall Of Fame.

Though often misinterpreted as a patriotic anthem, "Born In The U.S.A." actually speaks to the desperate flip side of the American dream encountered by some Vietnam War veterans. Still, the album of the same name garnered a GRAMMY nomination for Album Of The Year, spawned no less than seven Top 10 hits and was inducted into the GRAMMY Hall Of Fame in 2012.

It might take a nation of millions to hold back listeners of Public Enemy's confrontational and controversial hit "Fight The Power." Chosen by director Spike Lee as the musical theme for his 1989 film Do The Right Thing, the track calls out everyone from Elvis to the American government, imploring people to "fight the powers that be."

Featured on Rage Against The Machine's 1999 GRAMMY-nominated album The Battle Of Los Angeles, "Guerrilla Radio" is the band's call to cut off the lights, turn up the radio and tune out those they describe as "vultures who thirst for blood and oil."

A year before John Lennon and Yoko Ono famously held a two-week bed-in for peace in 1969, the Beatles released this Lennon/McCartney penned tune featured on The Beatles ("The White Album"). The song spoke to Lennon's skepticism about some of the radical tactics used to protest the Vietnam War, offering the tongue-in-cheek guarantee that everything was "gonna be alright."

Written by Barrett Strong and Norman Whitfield in protest of the Vietnam War, "War" was originally recorded by the Temptations. Starr's version of this classic track helped him achieve legendary status on the soul circuit. His cover was intense and direct, simply stating: "I said, war, good gawd ya'll/What is it good for?/Absolutely nothing!"

"The Times They Are A-Changin'"
Bob Dylan, GRAMMY Hall Of Fame, inducted 2013

After the release of "Blowin' In The Wind," Dylan provided another anthemic protest song with "The Times They Are A-Changin'." Since its release in 1964, the song has been covered by artists such as the Beach Boys, Joan Baez, Phil Collins, Billy Joel, and Nina Simone, among others, during both challenging and ever-changing times.

After all the protests, marches and calls for change have quieted down, arguably no song should be cranked up as loud as DeShannon's 1965 hit "What The World Needs Now Is Love." Per DeShannon: All we need "is love, sweet love/No, not just for some, but for everyone."

Know a song that changed the world? Let us know in the comments.