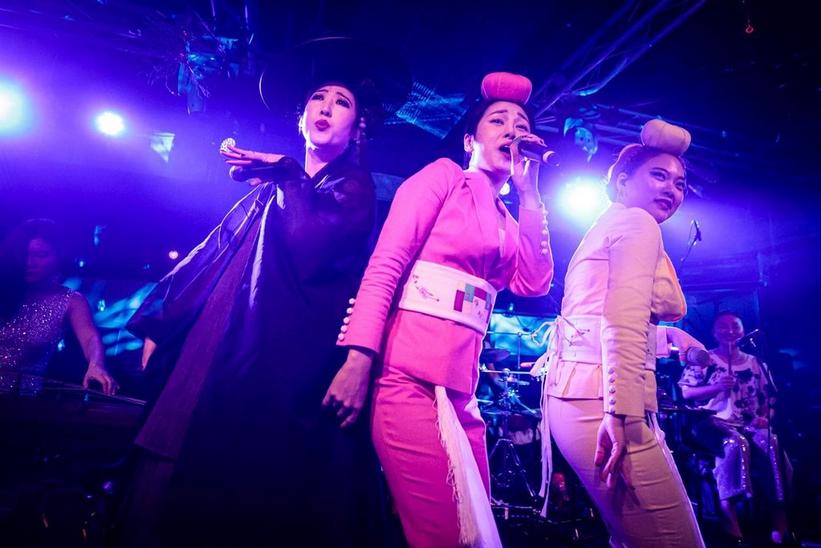 Even in New York City — an artistic epicenter with seemingly every population under the sun spread across five boroughs — global music is underrepresented in the arts. Enter GlobalFEST, an annual January festival and nonprofit dedicated to highlighting the impactful performances (and touring potential) of international artists across genres.

Held at the same time as the Association of Performing Arts Professionals conference, GlobalFEST is an opportunity for artists to perform in front of industry professionals — festival programmers, club promoters and media — who can see firsthand how a Ukrainian folk quartet or psychedelic punk band from Soweto resonates with American audiences. Many of GlobalFEST's artists perform some version of traditional music, which its organizers believe requires more of an effort for audiences and presenters to get behind.

"Often, the type of music that we present is almost an afterthought with a lot of presenters," says GlobalFEST co-founder and co-director Isabel Soffer. "They're presenting in big performing arts centers, Broadway plays and things that they know are going to sell really well. The more interesting stuff — which is often what we are bringing — takes a lot more work to sell tickets and for those shows to reach new communities."

Despite those challenges (as well as the myriad issues around finding funding, securing visas and managing COVID protocols), GlobalFEST has hosted over 2,000 performers from more than 80 countries. The festival has been the US launchpad for a variety of international artists while being an early stage for groups such as Flor de Toloache, A Tribe Called Red, Antibalas and La Santa Cecilia. The festival is also an important opportunity for audiences, notes co-director Shanta Thake. "Live performance is one of the opportunities we have to be with people that are not like ourselves," she adds.

GlobalFEST went online in 2021 in response to the pandemic, leaning into a partnership with NPR's Tiny Desk. The resulting online festival, Tiny Desk Meets GlobalFEST — a series of at-home performances that lent extra depth to the cross-cultural connection — was surprisingly successful, netting that year's 16 artists over 1.8 million views.

Although GF2022 was initially designed as a return to live, in-person performances, concerns regarding the omicron variant forced the festival to remain online-only, with nine performers scheduled for another Tiny Desk Meets GlobalFEST.

GlobalFEST will stream on NPR Music's YouTube channel Jan. 18-20, hosted by four-time GRAMMY-winner Angélique Kidjo. Before tuning in, get to know five of the fest's most alluring global acts.

Led by three singers typically dressed in contrasting colorful geometric outfits, the band also features traditional Korean instruments such as the gayageum — a 12 to 25 stringed plucked instrument — and the saenghwang, a free reed mouth organ. Energetic and theatrical, ADG7 manage to be both other-worldly and exquisitely pop.

The five-piece Son Rompe Pera meld marimba, cumbia and punk into an electric reimaging of a folkloric music.

Led by the three Gama brothers, Son Rompe was born out of a family marimba tradition; the eldest, Mongo, began playing marimba with his father at age 11. As Mongo, and brothers Kacho and Kilos performed at weddings, birthdays and at markets with their father José, they explored other music scenes while hiding their activity in the family band, also called Son Rompe Pera.

Today's Son Rompe has renewed appreciation for the rich history of marimba while actively folding in psychobilly, rock and cumbia. The result is punk as hell, with much respect paid to tradition.

Coming from San Basilio de Palenque, the first free Black town in the Americas, Colombia's Kombilesa Mí mixes traditional music from the region with rap. The nine-piece group are at the center of an emerging genre called RFP, or rap folklorico palenquero.

A family of popular griots and musicians, the members of Mali's Al Bilali Soudan perform Tuareg music that is a continuous exchange between the tehardent (lute), vocals and hand percussion, creating a somewhat psychedelic feeling.

The traditional genre Al Bilali Soudan performs has existed since at least the 16th century, and is played to celebrate the end of harvest, changing seasons, heroic warriors, and noble families. Yet, Al Bilali Soudan makes this ancient sound modern, masterfully creating a hypnotic and ethereal vibe that will take you to a far away land — even on YouTube.

Singer Kiran Ahluwalia may hail from Patna, India, but her sound spans far beyond her native country: She creates original compositions based on traditional Indian and Pakistani music while incorporating elements of jazz, R&B, and both Western and Mali blues.

Over seven albums, Ahluwalia's songs run the gamut from personal tales of growth, to love songs and empowered feminist ballads. Backed by a five-piece band (which includes accordion, organ and tabla), Kiran Ahluwalia has a borderless appeal that's both poetic and rocking.