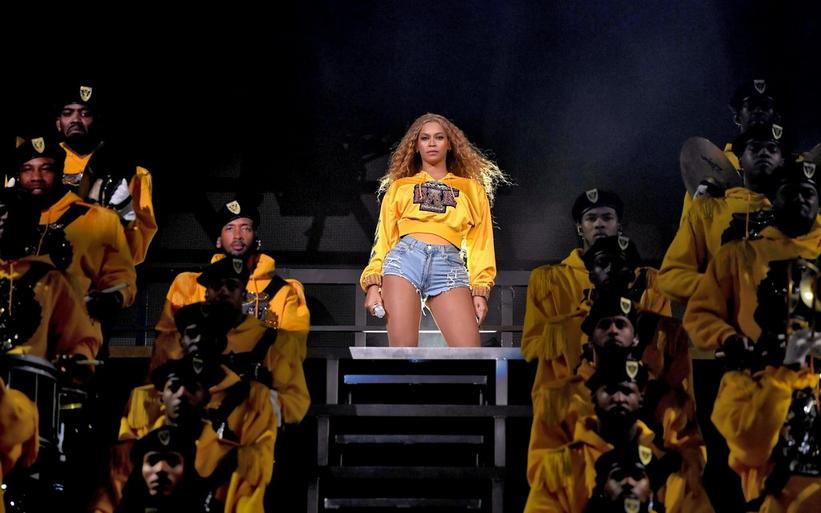 With her new Netflix doc, Queen Bey invites us to relive the moment she made history as the first African-American female headliner at Coachella 2018

By now, Beyoncé's historic performance at Coachella 2018 is engraved in our cultural music festival memory. If we weren't there either weekend in person, we watched the live-stream or heard about it through our friends or social media. We saw images of the icon paying tribute to black royalty (Nefertiti) and give a shout-out to black fraternities and sororities through her costumes. We heard about the Destiny's Child reunion.

But now, the Queen Bey is giving the world the opportunity to witness the moment in which she made history as the first African-American female headliner at the two-weekend festival—and for those that were there, giving us the chance to re-live it and get goosebumps all over again. The performances that took place the weekends of April 13 and 22, 2018 were meaningful both professionally and personally for the GRAMMY-winning artist. The headlining set was the icon's first performance since giving birth to her twins. (She was supposed to play Coachella in 2017, but doctor's told her to "keep a less rigorous schedule" during what was left of her pregnancy.)

So Coachella 2018 became the stage for her long-awaited come comeback and she made sure to bring her whole culture with her and go above her work ethic for the welcoming. The Netflix documentary titled Homecoming, released Wed. April 17, takes everyone behind the scenes of exactly what it took to execute such a huge performance (roughly over 200 people were on stage during the set.)

The documentary seamlessly switches between weekend one and weekend two performances (we can't forget that she did it twice) and was released with a suprise album of the live show with the same name. Here are some things Beyoncé taught us during her epic Coachella performance.

She Made A Space To Celebrate Black Culture At The Festival

"When I decided to do Coachella, instead of me pulling out my flower crown, it was more important that I brought our culture to Coachella," Beyoncé narrates during the roughly two-hour documentary.

And she did. From Nefertiti, Black Panther and Historic Black Colleges And Universities (HBCU) sorority and fraternity inspired costumes to her performance of "Lift Every Voice And Sing, (known as the black national anthem) to dance moves inspired by black and African culture, the singer put out a show that highlighted many parts of what it means to be black in the U.S.

Homecoming shows us how much she is personally inspired by her history. She reveals her dream of attending an HBCU and that she would go to the battle of the bands, where bands from HBCUs battle it out, when she was younger.

Throughout the documentary, quotes and voices belonging to historic black figures, including W.E.B Du Bois, Toni Morrison, Maya Angelou, Nina Simone and more. Her homecoming performance embodied her history and what she saw growing up and every part represented a piece of her experience.

It Highlighted The 22 Years Of Her Career

Beyoncé's homecoming desert performance also became a celebration of her 22-year career. Her performance with Destiny Child's took her fans back to her roots with songs like "Lose My Breath", while performances of "Diva," "Crazy In Love," "Drunk In Love" and "Formation" took them through all the stages of her career, giving them new life with the help of her marching band. Paired with choreography that was as emotionally captivating as historically meaningful—the stepping alone was so powerful—the 23-time GRAMMY winner's documentary cemented the reason the 2018 festival was dubbed Beychella.

While we are constantly in awe of her, Beyoncé is in awe of the talent that helped bring her comeback to life: the band, steppers, marching bands, dancers.

"I wanted a black orchestra, I wanted the steppers, I needed the vocalists, and the amount of swag was just limitless," she says in the doc. "Like the things these young people can do with their bodies and the music they can play and the drumrolls and the haircuts and their bodies and the...it's just not right. It's just so much damn swag."

She Is A Perfectionist/Disciplined With A Vision

The documentary revealed the months of rehearsing and planning to put the festival together. There was a four-month period of rehearsals with the band, before four-month dance rehearsals began. There were several meetings with Balmain's Olivier Rousteing, who helped bring her vision to life, before he flew to Los Angeles to meet her. For the performance, Beyoncé oversaw everything and personally picked every dancer, the height of the pyramid on stage, "every tiny detail had an intention." "I respect things that take work. I respect things that are built from the ground up," she said.

REALTED: Millennials Battle With Grabbing The "Instagram Moment" And Being Present At Concerts

She wanted everyone to feel the moment and it had to be perfect.

It's Not Easy Being Beyoncé, But She Slays Regardless

The documentary also took us into how she is juggling motherhood, reveals how complicated her pregnancy was and the sacrifices she had to make in order for the Coachella performance to happen.

At the end of it all, her goal was to make people feel seen: "I wanted every person who has ever been dismissed because of the way they look to feel like they were on that stage. Killing 'em. Killing 'em."