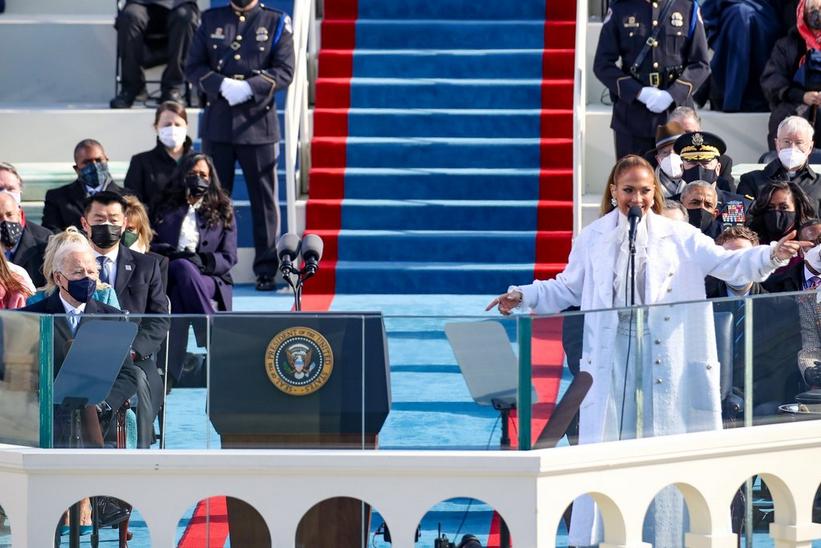 Before they each took their oath of office, GRAMMY-winning pop queen Lady Gaga walked down the steps in a billowing red skirt with a black top and gloves and a large gold dove on her shoulder to sing the "Star-Spangled Banner." She delivered the National Anthem with operatic grace and drama into a coordinating gold microphone, serving the soprano richness of her voice to the freezing audience.

Following Gaga's performance, GRAMMY-nominated Bronx powerhouse Jennifer Lopez had her turn to shine. She performed "This Land Is Your Land" and "America, The Beautiful," rocking a stunning all-white outfit with a floor-length fuzzy trench coat, sparkling earrings and her signature high, voluminous pony. She added her own special flair to the performance, which began to trend online (on-brand for the singer), by adding a line from her song "Let's Get Loud." Before ending her performance, she shouted, "Una nación bajo Dios, indivisible, con libertad y justicia para todos!" quoting the Pledge of Allegiance proudly in Spanish.

Garth Brooks also delivered a touching performance. The country singer took the stage wearing his classic black cowboy hat after Biden took his oath of office and gave his first speech as president. The country has "much to repair, much to restore, much to heal, much to build, and much to gain," Biden said, adding a moment of silence for those tragically lost to COVID-19 afterward.

Brooks followed the solemn moment with a passionate performance of "Amazing Grace" acapella. The singer aimed to bring a feeling of unity amid a pandemic that kept many from celebrating the moment in person, asking people watching—in person and at home—to join him for the powerful last verse.

Los Angeles poet Amanda Gorman, the first-ever National Youth Poet Laureate and the youngest inauguration poet ever at 22 years old, closed the show with her impactful words and yellow power suit. In her powerful poem that stole the show, titled "The Hill We Climb," she reminded us, "Victory won't lie in the blade, but in all of the bridges we've built…While democracy can be periodically delayed, it cannot be permanently defeated."