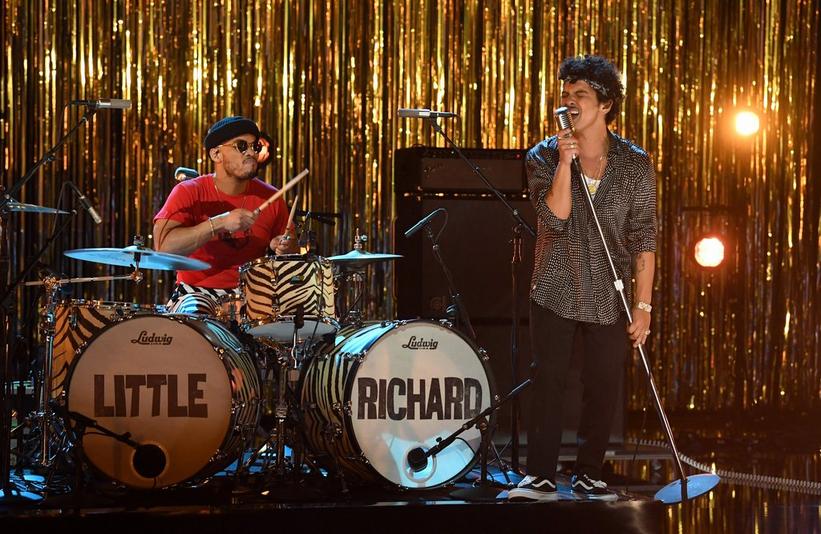 From Trap&B to a 90's revival, revisit some of the biggest trends that defined R&B this year

Anyone who's still asking if R&B is "dead" in 2021 just isn't paying attention. Not only did R&B singers enjoy record-breaking success this year, but the genre also became more intertwined with mainstream music than ever before.

In charting accolades, Summer Walker clenched her first No. 1 album on the Billboard 200 with her second album, Still Over It. The 20-song LP also broke the Apple Music record for the most album streams in a single day by a female artist and became the highest-charting album by a woman R&B singer since Beyoncé's 2016 masterpiece, Lemonade. Meanwhile, An Evening with Silk Sonic, the debut album of Anderson .Paak and Bruno Mars' superduo Silk Sonic, entered the Billboard 200 chart at No. 2 and also became .Paak's first No. 1 album on the Billboard Top R&B/Hip-Hop Albums chart.

Sonically, artists like KIRBY advanced the sound of modern soul on her Sis. He Wasn't the One EP, and Ty Dolla $ign and dvsn led the '90s R&B revival through some clever samples. R&B continued to grow and change this year, with innovative newcomers incorporating new sonic influences and R&B legends reminding fans why the genre will always live on.

From Trap&B to the return of girl groups, read on for eight trends that emerged in R&B music this year.

Lil Tjay and 6LACK hit the perfect combination of R&B and trap music with their melodic collaboration, "Calling My Phone." Soulful R&B feels and sparse trap production has been a popular pairing since the 2010's, but the two artists turned the trend into a major win. Along with being certified double platinum, "Calling My Phone" debuted at No. 3 on the Billboard Hot 100 — an all-time high for both Tjay and 6LACK — and took the No. 1 spots on Billboard's Hot R&B/Hip-Hop Songs, Hot Rap Songs and Streaming Songs charts.

As "Calling My Phone" suggests, the genre-blurring combo of R&B and trap is here to stay. "Woo Baby," the Chris Brown-featuring single from Pop Smoke's second posthumous album Faith, melded the genres with a sample of Nelly's 2005 song "So Sick," and modernized trap production. Yung Bleu also captured the crossover with his long-awaited debut album, Moon Boy.

Many '90s trends made triumphant returns in this year’s fashion and culture, and R&B was no exception. On their collaboration "Memories," Ty Dolla $ign and singer/producer duo dvsn (Daniel Daley and Nineteen85) sampled Silk's "Freak Me," adding their own updated spin to the 1993 bedroom hit. With nostalgic production by 40 and Nineteen85 and steamy lines from Ty and Daley, "Memories" demonstrates how the decade is still a major influence on R&B.

Cardi B and Normani also struck gold with a '90s sampling, using Aaliyah's 1996 classic "One in a Million" on their hit collaboration, "Wild Side." Similarly, a sample of Montell Jordan's 1999 song, "Get It On Tonite" crept its way onto Mahalia's dreamy offering, "Whenever You’re Ready."

KIRBY breathed new life into classic soul with her 10-song EP, Sis. He Wasn't the One. Incorporating impressive falsetto, the Memphis-born singer and songwriter modernized the nostalgic sound with cuts like "Lately" (featuring BJ The Chicago Kid) and "Boyz II Men," in which she shouts out her neo-soul predecessor Erykah Badu (“Badu tried to warn mе 'bout these Tyrones,” she sings before the final chorus).

Sis. He Wasn't the One was one of several contemporary soul records released this year — including Cleo Sol’s Mother, Phabo’s Soulquarius and Leon Bridges’ Gold-Diggers Sound — giving the stylish sound room to grow in 2022.

Girl groups used to be a staple in R&B, but VanJess and The Shindellas might just be bringing them back. While Chloe x Halle focused more on their solo careers this year, VanJess held it down for R&B sister duos, releasing their sophomore album, Homegrown. The Nigerian-American pair carved out their own lane in contemporary R&B, mixing nostalgic, '90s-leaning harmonies with an expansive production palette, which included everything from hip-hop to electronic beats. Meanwhile, Nashville-bred trio The Shindellas harkened back to classic R&B, blues and pop sounds on their debut album, Hits That Stick Like Grits.

While throwing a rap verse into a smooth R&B track can be polarizing for some, Summer Walker and City Girls’ J.T. proved that the formula can offer the best of both worlds. The pair’s unexpected mashup, "Ex For A Reason," puts Walker’s glossy voice over a punchy uptempo beat, with the song’s don’t-take-my-man narrative accented by J.T.’s fiery bars. Singer Joyce Wrice also mastered the rap/R&B crossover on her collab with veteran rapper Freddie Gibbs, "On One," the breakout track from her debut album, Overgrown.

On their first-ever collaboration, Bryant Faiyaz and Drake continued the R&B trend of feigned indifference in love songs — a stark contrast to the gushing, romantic gestures that characterized the genre's early sound. On their Neptunes-produced track, the two crooners invite their quasi-partners to "waste their time" with them, but make sure not to come on too strong.

SZA also sang about toxic love on her re-released SoundCloud hit, "I Hate U," which broke Apple Music’s record for most-streamed R&B song by a female artist in its first week. Opting to emphasize her feelings rather than cloak them, the songstress used blunt, raw lyrics to further modernize the trend.

The resurgence of funk and its inclusion in R&B records continued to grow as a trend this year, especially with the release of An Evening with Silk Sonic, the debut project from Bruno Mars and Anderson .Paak’s brilliant brainchild Silk Sonic. With production by GRAMMY-winning producer D'Mile and narration from funk legend Bootsy Collins, the nine-track LP boasted vintage soul and funk melodies that seem to be showing up more and more in retro-yet-contemporary R&B releases. Indiana five-piece Durand Jones & The Indications were also fueled by 70's funk this year, with their album Private Space calling back to the group’s classic influences, from the Isley Brothers to the Temptations.

Anthony Hamilton released his first album since 2016 this year, making a welcomed return for old-school R&B fans. His eighth studio album, Love Is The New Black, puts his soothing vocals on full display, even tying in the rap collaborations trend with guest appearances from Rick Ross and Lil Jon. While R&B was mostly dominated by newcomers in 2021, there was still a newfound sense of appreciation for genre greats.

The evening began with a tribute to the Queen of Soul, Aretha Franklin, but by the time the last of the 53rd Annual GRAMMY Awards was handed out on Feb. 13, several other singers and bands looked something like royalty. Foremost among them was Lady Antebellum, who walked away with three trophies while the group members earned two more each for songwriting categories.

Lady Antebellum at the GRAMMYs

During a show memorable for its range of fully fueled performances, the country superstars sang a pitch-perfect medley of tunes that ended with a quiet rendition of the song that launched them, "Need You Now," and shortly afterward collected the Song Of The Year GRAMMY for it (along with co-writer Josh Kear, with whom they also took Best Country Song). But there was plenty more to come for the trio. They also took home the GRAMMY for Best Country Album for Need You Now. Accepting that award, lead singer Charles Kelley said, "This song has completely flipped our world upside down." By the time Lady Antebellum stood up to collect a trophy for Record Of The Year for "Need You Now," they were in disbelief, and possibly discombobulated: "Oh my gosh, we're so stunned we started walking the wrong direction," said singer Hillary Scott breathlessly.

Also racking up awards was Lady Gaga, who claimed three: Best Pop Vocal Album for The Fame Monster, and Best Female Pop Vocal Performance and Best Short Form Music Video for "Bad Romance." Never one to miss the chance to make an entrance, she hatched herself onstage from a giant opaque egg. That was a riff on her new single, "Born This Way," and perhaps her bared shoulders, which sprouted a pair of pointy elbows, were too. Her dancers and outfit gave off a Cleopatra vibe, but Gaga can't be stopped from seeming ultra-modern, and her performance of "Born This Way" reflected that; it was a warp-speed whirlwind.

Lady Gaga at the GRAMMYs

In keeping with that same modernist — or maybe futurist — spirit, she accepted her award for Best Pop Vocal Album in black body armor. But Gaga also proved she can be an old-fashioned girl with a soft side. In an emotional acceptance speech for that award, she surprised the audience by thanking Whitney Houston: "I imagined she was singing…because I wasn't secure enough in myself to imagine I was a superstar. Whitney, I imagined you."

Leading the nominees with 10 nods revolving around Recovery, an album that detailed his struggles with addiction but also reestablished him as a rap force to be reckoned with, Eminem took home trophies for Best Rap Album — a triumph over rivals including Jay-Z, Drake and B.o.B — and Best Rap Solo Performance for "Not Afraid." Onstage, his swagger proved undiminished.

A flame-haired Rihanna opened Eminem's performance with a searching rendition of their duet "Love The Way You Lie," but it was Slim Shady who came out blazing, spitting the lyrics to that song before raging into "I Need A Doctor" with Dr. Dre and singer Skylar Grey; Adam Levine from Maroon 5 handled piano duty.

Closing the show and likely lifting the Sunday-night spirits of indie kids everywhere was the Canadian collective Arcade Fire, who won the Album Of The Year GRAMMY for The Suburbs and, before the night's final performance, turned in a frothy and fierce rendition of the rocking "Month Of May."

Arcade Fire at the GRAMMYs

Esperanza Spalding at the GRAMMYs

But if there was also a constant, it was the annual, high-profile celebration of music that the GRAMMYs represent, and the 53rd GRAMMYs fit the bill once again, with performances, pairings and awards presentations that were full of pleasant musical surprises.