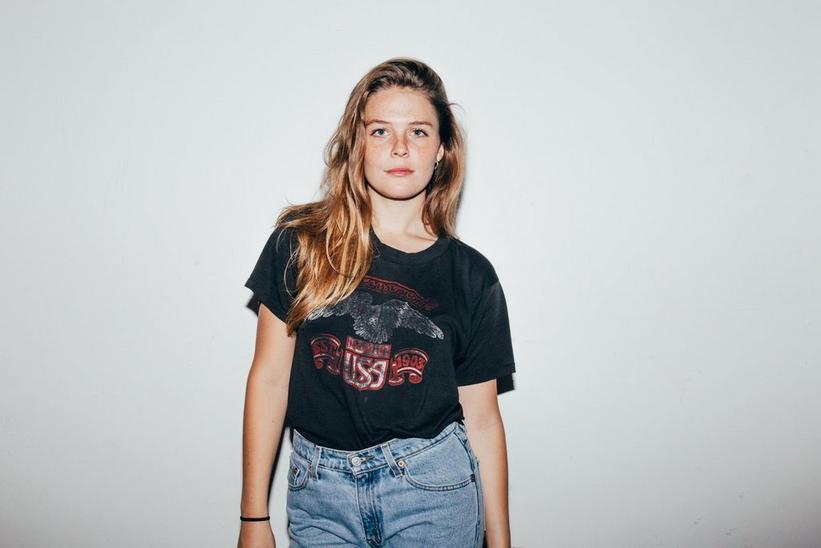 'Folktronica' singer/songwriter reveals her next instrument target, Björk's true color, her ideal chill time, and how classic novels can pay off on tour

Maggie Rogers' world is full of color. Her words, her songs and her personality imbue a rare vibrancy. That's why her song "Alaska" stopped Pharrell Williams dead in his tracks — of course, you've seen that video by now. And perhaps that's why she's parlayed that viral video into the picture-perfect opening act of a promising music career, anchored by the inventive folk-meets-electronica sounds on her major label debut EP, Now That The Light Is Fading, and nine months on the road.

We caught up with the 23-year-old NYU grad to see if she has caught her breath. Plus, we asked about her songwriting, friends, the favorite new city she's traveled to, the last great book she read, and a word or two on her music and style inspirations.

At this point, you are probably over talking about the whole Pharrell-"Alaska" thing. But at the core of this viral phenomenon is the power of music and the fact that he was moved by your song. Have you ever experienced a similar profound reaction after hearing another artist's song?
That's interesting. Yeah, I remember the first time I heard "Here's Where The Story Ends" by the Sundays. And I was about three seconds into the intro when I heard Harriet Wheeler's voice. I was in my friend's garage in Dallas, Texas, and I sort of stopped everything. I was like, "What is this?" I just loved the way she expresses herself.

You're quite the multi-instrumentalist. You can play harp, piano, guitar, banjo, harmonica, and even the recorder, among other instruments.
(laughs) I mean, I don't know if I can play recorder today (laughs). Yeah, I do play a lot of instruments. I started with the harp when I was young and then sort of moved to guitar and piano. Then I actually found a really happy pairing with banjo for a really long time in high school. Something about the banjo — it's an African instrument and the combination of resonance and rhythm really drew me in. But also, as a woman in high school trying to join jam sessions, it was a lot easy to get in with a different instrument instead of the seventh guitar in a circle.

Is there one elusive instrument you'd like to try and tackle?
I've always wanted to play violin.

I'd like to play a game of word association. What's the first thing that comes to mind with each of the following artists? First up, Björk.
I just pictured bright pink. Bright pink against blue. Maybe I'm thinking of her standing in the middle of an iceberg.

Kim Gordon.
I pictured her haircut (laughs). She's just so blunt. She's such a force of power.

I picked these artists because they are artists you've cited as musical influences. Who would you identify as your style influences?
Probably Patti Smith and Janis Joplin, I think they have amazing style. Björk — she wears really weird stuff and it's amazing. I think the Haim girls are always really well dressed.

You had an interest in potentially exploring freelance writing after college, before your music career really took off. What's the last great book you read?
I think the last great book I read was East Of Eden by [John] Steinbeck. I never read it before and I heard great things, so I picked it up. I guess I was expecting it to be this sort of like 1800s, California tumbleweed, prairie story, which I wasn't really sure if I sold on. But the storyline is insane. There's prostitution and there's like a whole family lineage — I don't know why prostitution was particularly exciting but I think I just was really not expecting it in a Steinbeck novel.

I've had the amazing experience this summer to play with Mumford & Sons, and they were so inviting and welcoming. I played a song with Marcus Mumford the day I finished East Of Eden this summer. And he was like, "Oh, should we do 'Awake My Soul' or 'Timshel?" And I was like, "Oh, I get it now," because Timshel is the last word of East Of Eden. Anyway, it was like, "My literary background is coming in handy."

You're from Easton, Maryland. What's the most fun thing to do in your hometown?
Film music videos! It's beautiful there. It's in the middle of nowhere — it's about two hours south of Washington. D.C., but it's amazing. It's right on Chesapeake Bay and there's a lot of corn and soybean. And so when I had the opportunity to film the music video for "Alaska," immediately the first thing I wanted to do was to invite all of my friends to have a dance party at my house. And we got to.

The scenery in your videos is very beautiful and striking.
Thank you. I think that's been one of the most amazing things: doing the music videos and getting to show all of the places that are important to me. "Alaska" was filmed at my family's farm in Maryland; "Dog Years" was filmed at the summer camp I grew up going to in Maine. And then "On + Off" was filmed on a soundstage, but like a block from where I live in Bushwick in Brooklyn. So we hit every spot.

You've admitted that your meteoric rise has been such a whirlwind. So what does the ideal quiet night for Maggie Rogers entail?
The ideal chill night has kind of changed in the last year as my pace has gotten a little crazy. A year ago I probably would have said, "At home, maybe a fireplace and a book, glass of wine." [Now] I would probably say, "Room service and 'The West Wing.'" Yeah, that's my final answer.

Vic Mensa Talks Chicago, Jay Z, And What He Taught No. I.D.