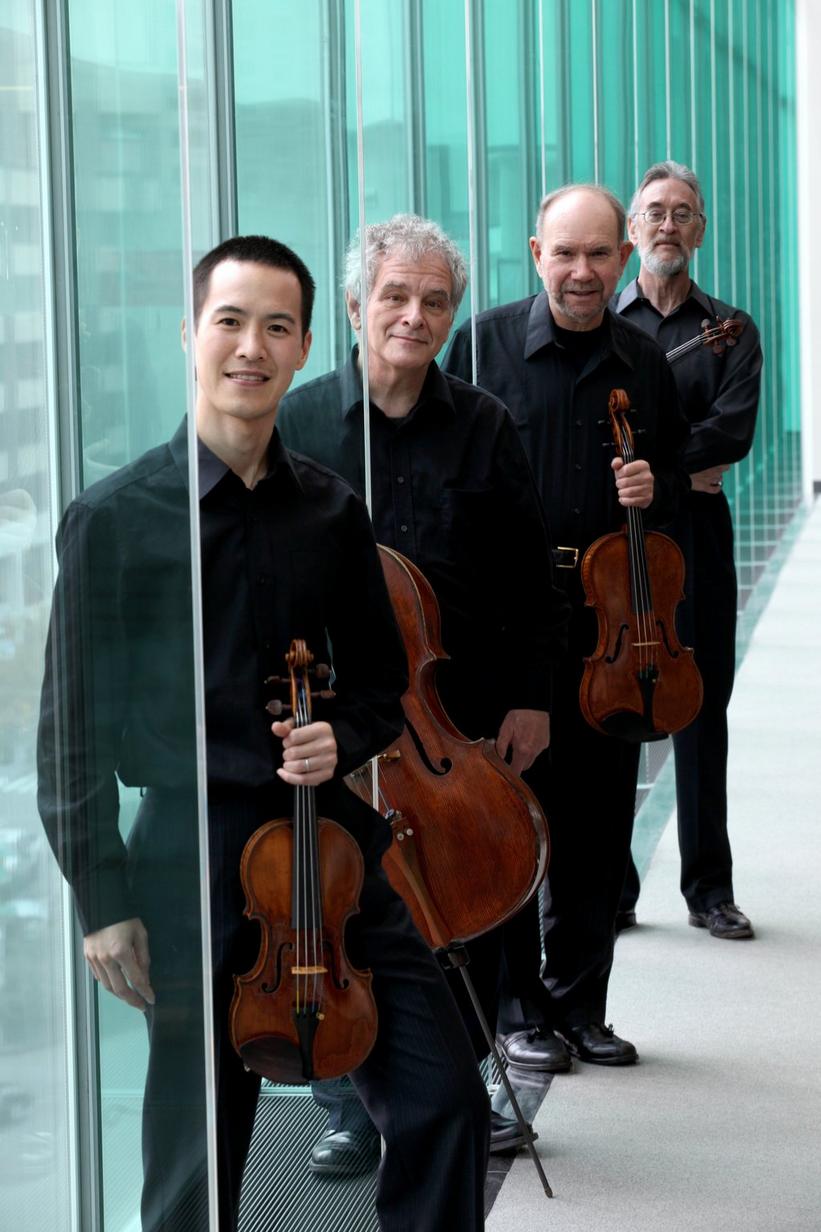 One of my favorite stories about music travels was told to me by Earl Carlyss, a master violinist and longtime member of the Juilliard String Quartet. The group was playing what was probably the first chamber music concert ever in a Western town in the United States — this was in the dark ages when we were all young — and after the concert, which was received with great enthusiasm, a rather grand lady sallied into the group's dressing room and said, "What a marvelous concert, and I hope your little orchestra grows and grows!"

The Juilliard String Quartet is largely responsible for the incredible rise in popularity and knowledge of the string quartet literature — and the fact that most music lovers are now as aware and excited by quartets as they are a grand opera.

When I first came to study at the Juilliard School, I knew nothing about chamber music, and certainly nothing about quartets. The first recording of quartets that I heard, and then quickly ran out to buy, was the Debussy and Ravel string quartets, as recorded by the Juilliard Quartet. I have since heard them countless times on record and in person. In fact, I had the privilege of studying and playing all of the Beethoven sonatas for violin and piano with Robert Mann, one of the founding members of the quartet, and one of the great artists of our time. Like most of my colleagues and friends who love music, I remain in awe of the continuing saga of the Juilliard Quartet.

Of course, the members have changed over the years, but somehow the pioneering spirit that animated the group from the beginning seems to remain. The quartet has inspired, and indeed nurtured, so many of the great ensembles of the present era, and has been the vehicle for an amazing number of works by the leading composers of the day. The first recording of the Bartók quartets and the complete Elliott Carter quartets are just two examples of an astoundingly complete and adventurous Juilliard discography.

This award is a fitting climax to the decades of dedication and love that the Juilliard Quartet has always brought to their work — on stage, in the recording studio and in the classroom. I hope and believe that there are many more years of the same to come, and I hope to be one of the many fans who will look forward to every new effort of the Juilliard Quartet.

(Pianist Emanuel Ax, who studied at the Juilliard School, is a seven-time GRAMMY recipient and has received 18 nominations to date.)

Influential jazz trumpeter Clark Terry died Feb. 21 in Pine Bluff, Ark., following complications from diabetes. He was 94. Over a career spanning more than seven decades, Terry was known as a first-rate session musician, accomplished sideman and bandleader. He collaborated with a variety of jazz luminaries, including Count Basie, Duke Ellington, Charles Mingus, and Thelonious Monk. He also served as a mentor to generations of jazz musicians, including fellow trumpeter Miles Davis and Quincy Jones. Terry received a 1964 GRAMMY nomination for Best Instrumental Jazz Performance — Small Group Or Soloist With Small Group for what became the signature recording of his career, "Mumbles," the first of four career GRAMMY nominations. As a member of the house band for "The Tonight Show Starring Johnny Carson" in the '60s, Terry became one of the first African-American musicians to hold a staff position at a television network. An advocate for music education, he served in advisory capacities for the International Association of Jazz Educators and Thelonious Monk Institute of Jazz. In 1991 Terry earned an NEA Jazz Masters fellowship. He was honored with a Recording Academy Lifetime Achievement Award in 2010.