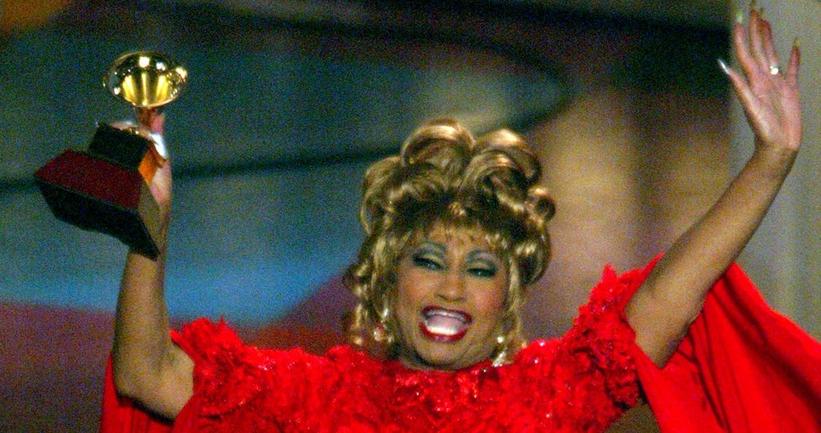 Celia Cruz at the 2002 Latin GRAMMYs

In the latest edition of GRAMMY Rewind, witness the magic and joy of the late GRAMMY- and Latin-GRAMMY-winning salsa great Celia Cruz during her acceptance speech for Best Salsa Album for La Negra Tiene Tumbao at the 3rd Latin GRAMMY Awards.

At 76, the prolific and charismatic artist still effortlessly stole the show, looking stunning in a floor-length red gown with billowing sleeves and gold nails that perfectly matched the Latin GRAMMY she won.

After being helped up the stairs by both her husband/manager Pedro Knight and presenter Justin Timberlake, Cruz offered smiles and gratitude to the audience. "Ladies and gentleman, excuse my English, because it's not very good-looking. But I want to say thank you to all of you," the Cuban superstar said with a smile, offering one of her famous sayings.

After someone in the audience shouted her most famous catchphrase, "¡Azucar!" (or "sugar"), she finished her speech with a triumphant "¡Azucar! I love you!" back to the crowd.

La Negra Tiene Tumbao was also nominated for Album Of The Year and Record Of The Year at the 2002 Latin GRAMMYs; the album's title track got a nod for Best Short Form Music Video, to. The 2001 LP—her 59th album!—also won Best Salsa Album at the subsequent 2003 GRAMMYs.