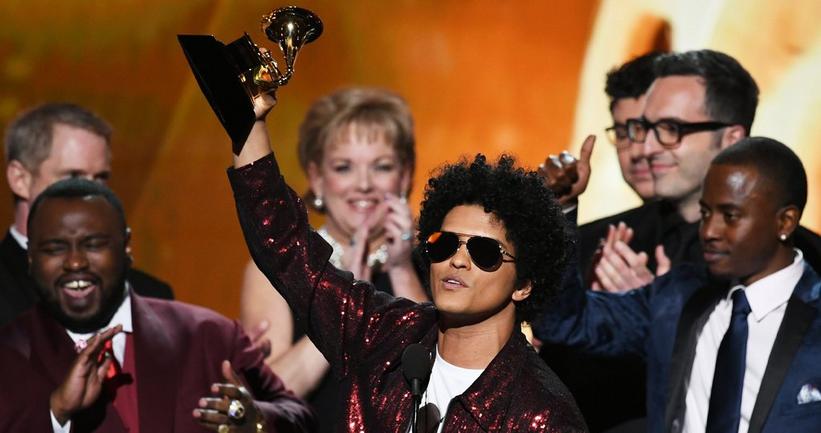 GRAMMY Flashback: Watch Artists From Throughout The Decades Win Album Of The Year

In this episode of GRAMMY Flashback, watch how artists across the years, from U2 to Kacey Musgraves, react to winning the vaunted Album Of The Year category, one of the most anticipated awards every year at the GRAMMYs

The 63rd GRAMMYs Awards Show is right around the corner, and the Album Of The Year category promises to be a lively fount of debate. Will Jhené Aiko win for Chilombo? Coldplay for Everyday Life? Haim for Women in Music, Pt. III?

Whatever the outcome, two things are certain: music fans will be discussing it for weeks to come, and it will be an emotional and creative milestone for the artist—as demonstrated time and time again by luminaries from Paul Simon to Lauryn Hill to Bruno Mars.

In the latest episode of GRAMMY Flashback, watch as artists from across the decades react to the career-making news—that their creation has been crowned as the Album Of The Year.

Watch the minute-long montage above and don’t forget to watch the ceremony on March 14 to find out who will win!

GRAMMY Flashback: Watch The Evolution Of Style At The GRAMMYs From The 1960s To The Present

Jon Stewart to LL Cool J: Who has hosted the GRAMMYs?

From Andy Williams and Whoopi Goldberg to Jon Stewart and LL Cool J, GRAMMY hosts have been a varied cast

The producers of Music's Biggest Night haven't always relied on the kind of superstar who can swing deftly from a concert stage to a TV set to shepherd millions of viewers through the telecast, though. Before LL Cool J got the nod in 2012, the GRAMMYs went hostless for several years. And before that — from the first nontelevised ceremony in 1959, with political comedian Mort Sahl, to 2005, when GRAMMY winner Queen Latifah was at the helm — an assortment of talents have played the role of GRAMMY host.

If they have anything in common, it may be along the lines of what a combined 50-plus years of Record and Song Of The Year awards share: they're all hugely recognizable. And more than a little influential.

Hosts, like the winning recordings, have been notable for the way they engaged (Paul Simon, host at the 23rd GRAMMY Awards in 1981, performed his relentlessly catchy "Late In The Evening"), or for the doses of poignancy they brought to the proceedings (just last year at the 54th GRAMMY Awards, LL Cool J led a prayer for the late Whitney Houston). Some captured the zeitgeist and, like certain songs, will go down in GRAMMY history for catching people off guard.

Stewart, along with Garry Shandling and Paul Reiser before him, fits the category of GRAMMY comedian hosts, an era that spans from 1987, when Billy Crystal began his three-year run, to 2002, when Stewart hosted for a second year. Stewart's entrance onto the 44th Annual GRAMMY stage on Feb. 27, 2002, was less than grand: At the end of an opening skit in which he tussled with a pretend airportlike security team – a riff on the pumped-up security measures that swept the country soon after Sept. 11 — he was stripped, forcibly, down to his boxers.

Because the GRAMMYs are well-versed in the ways of rock stars, their fashion sense included, the show is only nominally a black-tie event (at least since the mid-'60s, when, pre-televised, it was held in hotel ballrooms on both coasts). Boxers only, though, was a bolder-than-usual fashion statement.

At times, GRAMMY hosts such as Kelsey Grammer have been caught off guard. The TV actor, who hosted the 40th annual show in 1998, had to figure out what to make of the shirtless stage crasher who forever will be known as "Soy Bomb" because of those same two words, inexplicably painted across his bare chest. Soy Bomb, neé Michael Portnoy, memorably interrupted Bob Dylan's performance of "Love Sick," from his Album Of The Year-winning Time Out Of Mind, that night. Grammer — though he played a psychologist on TV at the time — was as confused by the stunt as everyone else.

Before comedy became a staple at GRAMMY telecasts, hosts were tapped for their own musical accomplishments. Andy Williams, a '60s superstar for indelible hits such as "Moon River" as well as his two TV variety series, hosted the first seven live shows, starting in 1971 with the 13th Annual GRAMMY Awards.

In 1978, for the 20th Annual GRAMMY Awards, Williams gave way to John Denver, then in his recording prime. Like Williams, Denver went on to become a regular — he hosted five more times, winding up his tenure in 1985. But his run was not without interruptions. Country star Kenny Rogers hosted in 1980, at the 22nd Annual GRAMMY Awards, and went on to host again six years later. Denver also put his hosting duties on hiatus in 1981, at the 23rd Annual GRAMMYs, when Simon signed on.

Williams is the only one of those early musical chart-toppers not to have won a GRAMMY himself, though he was nominated several times. In all, since the first broadcast, seven hosts have won GRAMMYs. Besides Denver, Rogers and Simon, Stewart won Best Comedy Album for 2004's The Daily Show With Jon Stewart Presents … America: A Citizens Guide To Democracy Inaction and Best Spoken Word Album for his 2010 release The Daily With Jon Stewart Presents Earth (The Audiobook); Whoopi Goldberg, who hosted the 34th Annual GRAMMYs in 1992, during the comedian-as-host phase and won for Best Comedy Recording for her 1985 album Whoopi Goldberg — Original Broadway Show Recording; Queen Latifah, who hosted in 2005 and won Best Rap Solo Performance in 1994 for "U.N.I.T.Y."; and current host LL Cool J, who won Best Rap Solo Performance in 1991 for "Mama Said Knock You Out" and in 1996 for "Hey Lover." DeGeneres is vying to become the eighth with a current 55th GRAMMY nomination for Best Spoken Word Album. Simon has given the most acceptance speeches — he's won 16 GRAMMYs.

While GRAMMY hosts have a knack for scoring GRAMMYs themselves, that isn't the only thing connecting them, achievement-wise. Several have gone on to host other awards broadcasts, too — most notably Crystal, who has hosted the Academy Awards a whopping nine times. Goldberg and Stewart have also been Oscar hosts, though, and so has DeGeneres, who hosted the 38th and 39th Annual GRAMMYs in 1996 and 1997, respectively. Rosie O'Donnell — another veteran of the era of comedic GRAMMY hosts for her 1999–2000 stint — has been a regular host of the Tony Awards. And Queen Latifah has helmed the People's Choice Awards and the BET Awards.

No matter what they went on to do, or how many stages they won awards on themselves, each has proved an essential, memorable part of Music's Biggest Night.

(Tammy La Gorce is a freelance writer whose work appears regularly in The New York Times, and on All Music Guide and Amazon.com.)