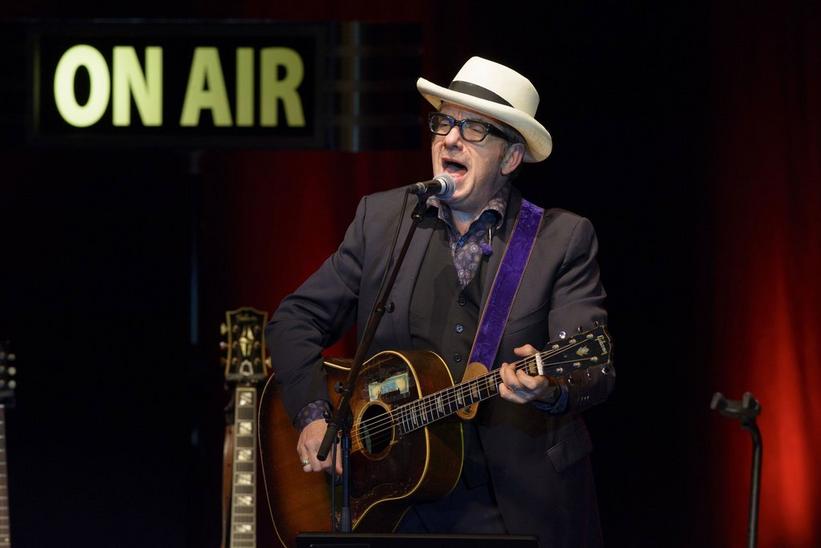 What can we learn from an artist's first album? In the case of singer/songwriter Elvis Costello, as it turns out, quite a bit.

He recorded his debut album, My Aim Is True, for a cost of £2,000 in only 24 hours, leveraging his sick days and holidays from his job as a computer operator. On paper, it was not an auspicious start.

My Aim Is True arrived in 1977 while music was in the midst of a punk-rock revolution courtesy of the Clash, Sex Pistols, and Ramones, but Costello borrowed from a different wellspring.

The son of a musician, the Englishman poured more material into his debut than his pigeonholed "new wave" label could hold, and he's spent the next 40 years revealing the seemingly endless depth of influence his music has conjured.

By 2007, My Aim Is True was inducted into the GRAMMY Hall Of Fame in recognition of its standing as one of rock and roll's greatest recordings.

With that in mind, and in celebration of the 40th anniversary of the classic album's original U.K. release, here are five moments on My Aim Is True — and select tracks left from its cutting-room floor — that set the tone for Costello's prolific career.

In the first line of the first song of his first album, Costello came out swinging with a crafty musical and irreverent lyrical phrase that landed a stiff punch: "Now that your picture's in the paper being rhythmically admired/And you can have anyone that you have ever desired."

The dreamlike reverie album opening paints a crude picture of fame and privilege before jolting it all back into the blue-collar worker's harsh reality.

Just 14 seconds into "Welcome To The Working Week," Costello demonstrates the genius and snarl he's capable of: a gorgeous key-borrowing modulation (tossing in a "II major" chord for those theory types keeping score at home) under a sly, taboo lyrical reference turned into a snarl of "why, why, why, why."

Costello would incorporate these devices in many of his greatest songs throughout his career, from the delicately intricate "Almost Blue" to the venomous "20% Amnesia" and everywhere in between.

A dark take on tenderness in "Alison"

The lone ballad on an album known for its wound-up velocity, "Alison" has somewhat ironically become My Aim Is True's most enduring song.

In both construction and execution, "Alison" is as unsettling as it is graceful. The song provided a glimpse of Costello's harmonic touch, lucid vocal delivery and artistic range that teased a bevy of beautiful ballads to come, including "Shipbuilding, "Favourite Hour" and "I Want To Vanish," each with its own searing streak of darkness.

While "Alison" never charted for Costello, it did for Linda Ronstadt, who recorded a trifecta of Costello songs for her 1980 album, Mad Love, including "Girls Talk," "Party Girl" and "Talking In The Dark." Over the years, he's would also be covered by Aimee Mann, Johnny Cash, Fiona Apple, and his wife, Diana Krall, to name a few.

At 22 years old, Costello demonstrated a sharp social consciousness. "Less Than Zero" took on a former British fascist leader, Oswald Mosley, who had re-emerged in British media to try and clear his name. According to Costello, "The song was more of a slandering fantasy than a reasoned argument."

But the track's passion and anger were very real. "Less Than Zero" itself became a pawn in a different sort of protest match when Costello lashed out against the imposed constraints of corporate controlled broadcasting, stopping a performance of the song mid-verse on live TV in favor of a blistering version of another statement song, "Radio Radio." The stunt resulted in a ban from "Saturday Night Live," the show where the whole fiasco went down.

Although not included in the original album release in the U.K., "Watching The Detectives" was added to the U.S. release of My Aim Is True. Producer Nick Lowe, an influential artist/songwriter in his own right, went with a different rhythm section for "… Detectives," calling upon the aptly named young classical keyboardist, Steve Nieve.

The signature organ parts and eerie sounds Nieve added to the song were tip of the iceberg to the dressing he lavished on subsequent Costello numbers such as "Shot With His Own Gun" and the mad and moody masterpiece, "I Want You."

In his GRAMMY-nominated 2015 autobiography, Unfaithful Music & Disappearing Ink, Costello attributed the inspiration for "… Detectives" to a cinematic influence: the noir films based on Raymond Chandler stories, especially 1944's Double Indemnity.

"The shorthand of cinematic directions in 'Watching The Detectives' lyrics came pretty easily after memorizing all those films," Costello explains.

The country song that didn't make the album, but surfaced later

One of only three outtakes from the My Aim Is True sessions, "Stranger In the House" never had a chance at making the cut. According to the Costello-penned liner notes for the album's 1993 Rykodisc re-release, "The inclusion of a 'country song' was thought to be commercial suicide in 1977."

But the echoes of "Stranger …" refused to fade. Costello's country hero, George Jones, recorded a cover in 1979, on which Costello guested. Costello's version of the song appeared later on a 1980 B-sides collection, Ten Bloody Marys & Ten How's Your Fathers.

Costello's knack for collaboration and genre dexterity have served him well throughout his career, as he recorded full albums with a variety of musicians and styles, including classically trained mezzo-soprano Anne Sofie von Otter, R&B legend Allen Toussaint and songwriting mastermind Burt Bacharach. (Not to mention the fabled co-writing he did with Paul McCartney).

Other history-making albums: Revisit the Beatles' Sgt. Pepper's … at 50