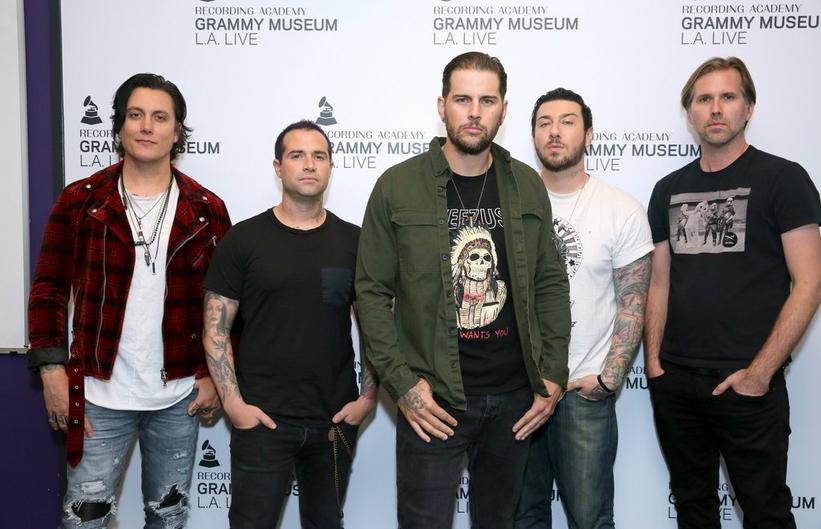 Progressive, sprawling and epic, "The Stage" is the opening and title track on A7X's seventh studio album, which saw a surprise release on Oct. 28, 2016, and launched the quintet's sound in a bold new direction.

"This was definitely a really crazy record to write," says guitarist Synyster Gates. "'The Stage' in particular is a super-long, thematic, building, progressive opening track that excites you as an artist and it excites you to introduce it to your fans, but you don't think GRAMMYs or radio."

Gates continues, "The irony of this, our last record, Hail To The King — I wouldn't say we were trying to make a sell-out record, but we were trying to make a super-concise, one vibe a song, because we'd never done that before, and so it's got tons of these three-four-minute bangers that seem maybe a little bit more radio palatable, and nothing for that one. But we write the craziest record of our entire career and that's when we get the GRAMMY nomination."

For The Stage, the band enlisted GRAMMY-nominated producer/engineer Joe Barresi (Melvins, Queens Of The Stone Age, Monster Magnet, Tool) for the first time. True to the LP's title, Barresi pushed the band to get the feel of their exhilarating stage show.

"Joe Barresi brought a lot of new things to the table," lead singer M. Shadows revealed on Full Metal Jackie (as told by Blabbermouth). "And one thing that I had never done was to do full-song vocal takes, where you sing from the very first lyric all the way to the end of the song, and as your voice starts straining, and as it gets a little more tough on the vocals, you get that live feel."

Exploring uncharted territory in the studio can be exhausting and time consuming. But in a world where many successful bands feel pressured to restart the album cycle with regularity, taking the time to craft the new album was a conscious decision.

"We kind of reached this point in life where we don't really want to put out anything just to put something out," Shadows told Rolling Stone. "We really don't want it to be like, 'Two years are up. You've had your break; now do another record and get it out there.' We needed to wait until something really inspired us, and that's why the record took a long time to get done."

Definitely worth the wait, "The Stage" gives Avenged Sevenfold their first crack at a GRAMMY win the 60th GRAMMY Awards on Jan. 28. A7X are currently on tour in the U.S., headed for Europe this summer, and they continue to push themselves musically, recently releasing their first acoustic recording, Live At The GRAMMY Museum.