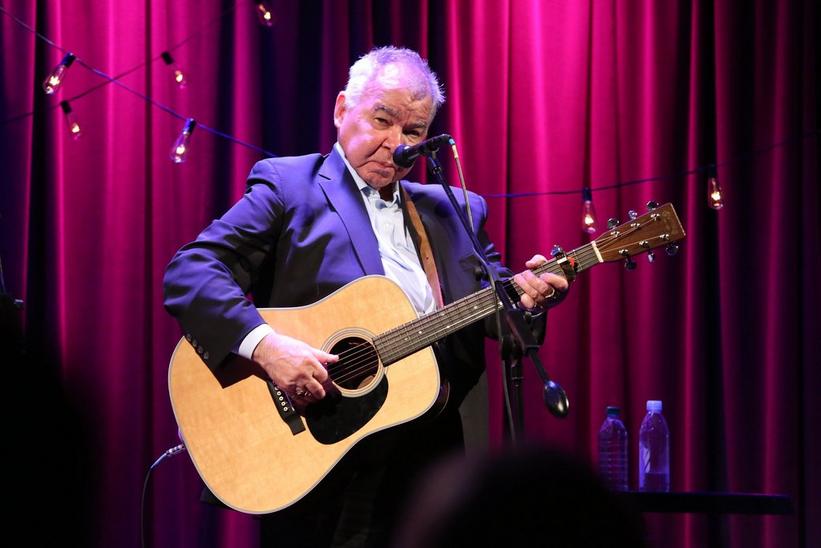 The first you listen to John Prine's 1971 self-titled debut album can be a transformative experience. While you can feel the familiar folk tradition, his songwriting presents song after song after song of something altogether new. In 2016, Prine reflected on playing these early songs, including his classic "Sam Stone," for the first time in public.

"Some [of his first songs] were so different that I hesitated to sing them for anybody," he said. "Because I thought, 'I haven't heard anything like this before, like 'Sam Stone.'' I thought, 'Is it because it's really good, or is it because it's so awful. And the first time I sang it in public, people didn't applaud, they just looked at me, and I thought 'oh st this is worse than I thought.'"

The interview comes from a 2016 event presented by the Recording Academy at the GRAMMY Museum in Los Angeles. This unforgettable evening featured an in-depth conversation with Prine and GRAMMY winner Sturgill Simpson, led by acclaimed music writer and author of Songwriters On Songwriting, Paul Zollo.

Tragically, Prine died this week at age 73 after falling ill with coronavirus. Fans and fellow songwriters everywhere in the music community mourn the loss of one of its greatest the masters, and Simpson posted a heartfelt tribute to his hero and close friend, writing, "So long old man. You will always be loved."

Believe it or not, Prine didn't always think he'd be a songwriter.

"I was looking for something that would interest me, and these interested me, but I didn't know if that would appeal to anybody else," Prine said. "I really wasn't thinking that I was a songwriter, like Sturgill says, It was a hobby, but it took three or four beers for me to stand up and sing to twelve people."

"You were doing better than I was," Simpson joked, pulling one of countless laughs from the crowd that night.

Zollo also asked Prine about his surreal experiences arriving in New York City to meet his iconic contemporaries like Kris Kristofferson, Steve Goodman and, of course, Bob Dylan, all of whom became big fans and supporters of Prine's unique songwriting talents.

Prine recounts the b-movie-esque scene of jumping out of a taxicab with Goodman to catch Kristofferson at legendary venue The Bitter End, calling Dylan up on stage with him, and other wild memories from the Big Apple. "I saw Stevie Wonder eating a banana split once," Prine remembered. "That was pretty cool"

Prine's humor, always understated and deceptively sharp, is present in the conversation just as it is in his songs. And at a time when the world is changing, full of uncertainty, he reminds us not only of the lasting power of songs, but of their intrinsic connection to the human experience. To that end, Zollo asked if songs will always matter, and if people will always want songs in their lives.

"Songs are different from the music business and music and even records," Prine said. "If people didn't have music, they'd come up with it. They'd just drone and moan in the kitchen at night, and music would come out of it. It's something that people need, and they need to get stuff out of them[selves], so people would write songs. Otherwise you'd never get it out of you."

You can see more of Prine and Simpson's discussion in the video above, including a snippet of Prine performing his heart-wrenching tune, "Souvenirs."

John Prine Was The Master Of Lyrical Economy