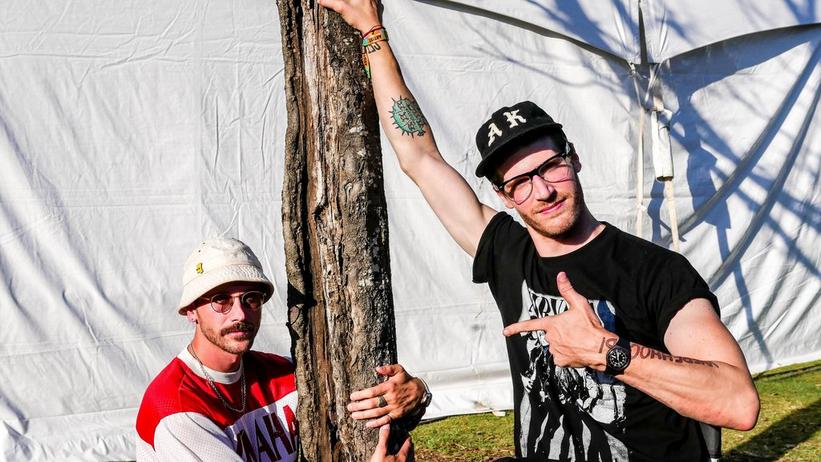 John Gourley and Erick Howk of Portugal. The Man

Portugal. The Man On "Feel It Still," 'Woodstock,' Music With A Mission

Portugal. The Man are having a good year.

Their eighth studio album, Woodstock, dropped early this past summer, and the album's lead single, "Feel It Still," rocketed to No. 1 at Alternative and AAA radio, becoming the group's first chart-topping single in either programming format.

With production aid from Mike D of Beastie Boys fame, the band has continued their current trend of heading into the studio with top-tier talent at the helm. (Their last LP, Evil Friends, was co-produced by Danger Mouse)

Lead vocalist and guitarist John Gourley and guitarist Erick Howk of Portugal. The Man sat down with the Recording Academy to discuss the intent behind their new album, the influence that Woodstock has on modern music, and how co-producer Asa Taccone helped them coax "Feel It Still" out of the ether.

Let's talk about "Feel It Still." Top 10 hit, No. 1 at Alternative radio. Can you share a little bit of the story, inspiration or the intent behind the song?
Gourley: "Feel It Still" came around pretty much as organically as you can put a song together. I believe we were working on "Live In The Moment" with John Hill. We were working on mixing at the end of the day, and I think I had just stepped out while they were doing that. I'd stepped out and I just picked up this bass, and I started plucking this bassline. Asa Taccone from Electric Guest happened to be in this room, and he heard me playing this bassline. It's a strange thing with other artists, because they're not always the most outgoing and open to collaboration. I'm really glad Asa heard what was happening and he just caught it and it was all just him recognizing that there's something in this groove. It was basically 45 minutes at the end of the day, which is the most frustrating thing to tell anybody, but I really just sat there and started playing that bassline. Asa said, "Hey, do you have a bridge?" I said, "Yeah, it's music, man." And he was like, "Well, write a bridge."

So I used three different chords and he handed me a microphone and just had me riff off the top of my head.  The "rebel just for kicks" lyric, I had actually had that for a little while. I'd tried it a few times and it just never felt right. Sitting down working on that track, there's something about it that reminded me of that '60s era, and I think it was probably the Hofner bass. It was all very natural. The funniest thing is how I got the bridge on the song. That "Is it coming? Is it coming?" That was actually Asa. I couldn't write a bridge at that moment. The first verse and the second verse and all the choruses, that all came from the first 45 minutes.

It's a modern song — lyrically, it's modern. It's got the right sub [bass], it's got the right feel to it, and there's just something that happens when you hear that, and you connect all these pieces from the '60s and the bass tone and the simplicity of the way we recorded it.

Let's talk about the album title: Woodstock. You guys have commented that the title comes from this idea about the persistent mission of music. Can you expand a bit on that statement and what you feel is the mission of music?
Howk: I think just having an album called Woodstock, it's a bold move; it's a pretty ballsy move. It's not just named after the little town in upstate New York, and we took a huge inspiration from the festival. Woodstock was a reactionary moment that was coming out of an America that was pretty bleak. A Richard Nixon presidency, McCarthyism, xenophobia, fear-based politics, and it was pure reactionary. It was was proof that a large crowd can change history so much more than one president can or one bill being put into place. It was mob rules and it was rad.

Obviously, we weren't alive. I did not go to Woodstock. I think I was probably 12 or 13 years old, learning how to play guitar, like really getting into rock and roll, right when the 25th anniversary of Woodstock came around. So they remastered the film and suddenly it's on public television, basically on a 24-hour loop. Like, I'm trying to figure out a G and a C chord and there's Jimi Hendrix and Santana and CCR just wailing, and specifically that Richie Havens moment — we've all talked about this. We all kinda separately in our own families, and in our own living rooms around the TV, had a very connected experience just watching him do his "Motherless Child" performance. And basically, he's killing time until the next act. He's just filling space, opening the festival, but he's going for it and he's sawing the guitar in half and his technique was so interesting. He's got the thumb hanging over, just these massive hands, sawing the guitar in half. And you can practically see the blood coming out of his throat on to the microphone. It was the first real passionate performance I think I'd ever seen.

I'd seen punk. I'd seen, you know, metal dance and stuff. Nothing compares to that. There's nothing harder and heavier.

Another comment you've made in the past is that your intention is to make music that helps people "feel like they're not alone." I'm interested in what music makes you guys feel like you're not alone, that you're not lost in the world? Your influences?
Gourley: I hear The Beatles, and I'm like, "Well, no one's gonna do that." (laughs)

Howk: I used to tour … I'd drive all night by myself, and any time I would get tired, I had this routine down: When I was just at the point where I couldn't keep my eyes open anymore, I'd chug a Red Bull. I'd pull over. I'd set a timer for 35 minutes, and I'd put on Pet Sounds by the Beach Boys. I'd turn the heater up in my car and kick the seat back, and fall asleep for 35 minutes. I'd wake up right at the last moment. And there's something so comforting and beautiful about that record, I just feel like I'm in my living room with my family. It's beautiful. Like, "Wouldn't it be nice if I wasn't alone on the side of a road right now?" (laughs)