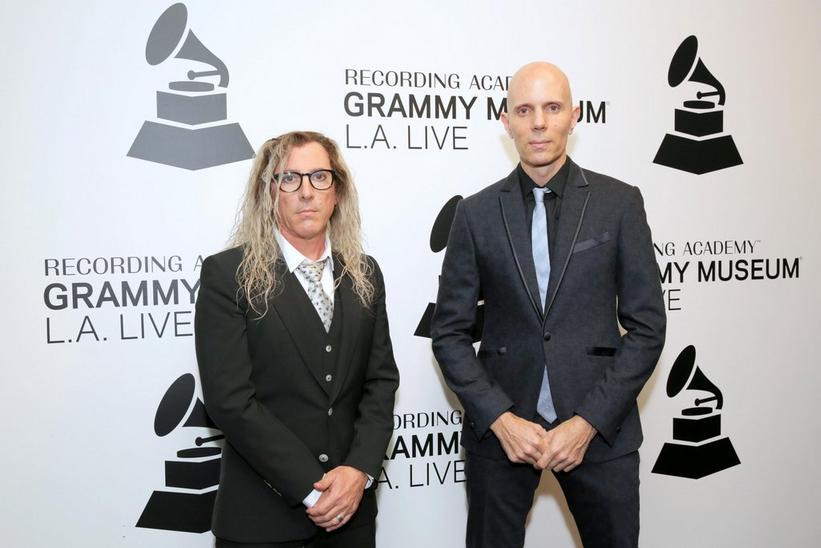 A Perfect Circle On Influences, Collaboration & Building 'Eat The Elephant'

The influential rock group stopped by the GRAMMY Museum to discuss the impetus for their new music, their early influences and the creative process behind their big 2018 return

A Perfect Circleis the kind of band fans wait with bated breath to hear new music from, no matter how long they are away. In the case of Eat The Elephant, the band's fourth album, the wait was a full 14 years. Still, the new material was met with much anticipation, a testament to the art.

Back in October, we premiered a video for the title track from the album-length film the band made for Eat The Elephant. In the song, lead singer and songwriter Maynard James Keenan’s stark, haunting vocals creek and soar over lead composer and guitarist Billy Howerdel's dynamic backdrop. During a recent visit to the GRAMMY Museum in Los Angeles,as Keenan and Howerdel shared how they came to revisit the project after all these years away.

"I think it was just time," said Keenan. "I was really busy with Puscifer for quite a while. Then I was gonna get back into doing some Tool music, and they weren't ready, so I was like [to Howerdel], "Hey, what's up?"

The time passed since their previous album, 2004's Emotive, manifests itself on Eat The Elephant in the space within and around its songs, creating a new sonic environment from the band's previous work. This had everything to do with how the songs' foundations were built.

"A lot of times on this record we had the song kind of almost complete, and then he put the vocals on top. It was pretty amazing," explained Howerdel. "Maynard had a lot more input into the music this time, just to, you know, try to some things, because he knew where he was gonna go vocally. He wasn't in the room when I was working on the music, so we'd kind of lightly steer in that direction. And I think it worked out because he just had something in mind and then was able to throw the solid final performance on top of it."

When it comes to architecting a vocal, Keenan does it like no one else. The genesis of his genius instincts begin with responding to the music, as he revealed during the conversation. "First and foremost, it's a reaction to the melodies and structures and time signatures that the group of musicians are presenting me, whether it's Mat Mitchell, or Billy, or Tool," he said. "It's all a reaction melodically to those rhythms, constructing it in a way that feels like an actual conversation. And I of course react better when they're not in 4/4. I don't speak in 4/4."

"Then [I] figure out where that emotion is going, and then just look at your life experiences, what you're experiencing at the moment, and attach a set of words or a circumstance to that set of rhythms and melodies to see if it opens up a whole story, because you know, human interaction, human experience from birth to death, there's an infinite number of flavors and colors and bandwidths and emotions that come with those experiences."

Keenan also named an intriguing roster of early influences, providing a glimpse into his stylistic DNA. His early exposure to everything from Roberta Flack to Black Sabbath to Joni Mitchell led to an appreciation of Minor Threat, Killing Joke, Swans and Nick Cave and the Bad Seeds, which in turn led him to Gillian Welch and PJ Harvey.

"To me, there's a sadness that's captivating in that writing that's essential," Keenan says of Welch, Harvey and his tastes as they've evolved over the course of his life.

A Perfect Circle has evolved, too. At its core, it's a dynamic collaboration, which means Keenan and Howerdel cannot say what will come next.

"It's a marriage of sorts," says Howerdel. "You have to make this more than just the sum of its parts, more than the sum of the two of us. That comes from the unknown of collaboration… Having collaboration is the magic of never knowing what's coming next."