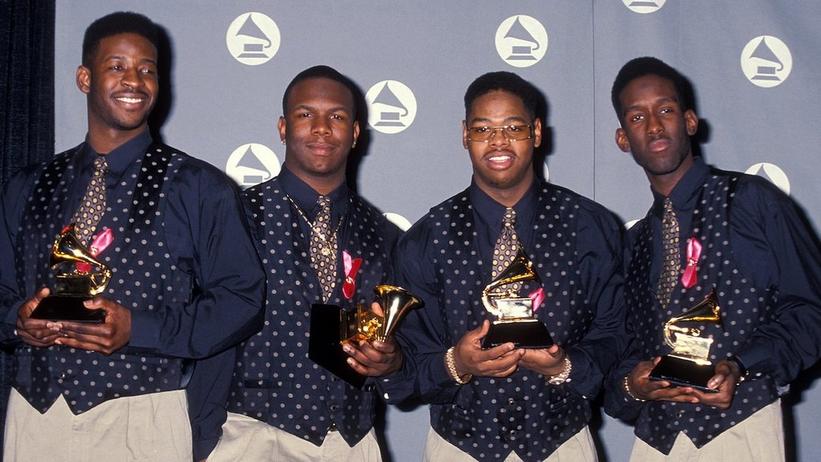 GRAMMY Rewind: Watch Boyz II Men Win GRAMMY For Best R&B Performance By A Duo Or Group For "End Of The Road" In 1993

In the latest episode of GRAMMY Rewind, Boyz II Men accepts their second back-to-back GRAMMY win for Best R&B Performance By A Duo Or Group With Vocal

"We came into this music industry with one dream, and that was to get one," Boyz II Men founder Nathan Morris says while holding up the GRAMMY Award for Best R&B Performance By A Group Or Duo With Vocal. "And now we got two."

In the latest episode of GRAMMY Rewind, travel back to 1993 to capture Boyz II Men's GRAMMY win for their 1992 hit record "End of the Road." Watch the Philly foursome accept GRAMMY number two below.

After spending a then record-breaking 13 weeks as the Billboard Hot 100 number one track, "End of the Road" ranked number one on Billboard's Year-End Hot 100 singles and finished sixth on the publication's most successful songs of the decade list. The track was written by GRAMMY winners Babyface, L.A. Reid and Darly Simmons.

Evidenced by the popularity of "End of the Road," Boyz II Men were one of the biggest R&B acts of the '90s, winning four GRAMMYs and earning 11 nominations during what many consider the heyday of the genre.

Relive more moments from the GRAMMY Rewind archive below.

One of the year's most anticipated events attracting GRAMMY winners, nominees and celebrities, the 2014 GRAMMY Celebration will take place at the Los Angeles Convention Center on Jan. 26 immediately following the 56th Annual GRAMMY Awards telecast. The Roaring '20s, the boisterous and exuberant decade proclaiming social liberation, will serve as this year's theme for the all-star GRAMMY Celebration where guests will dance, party and continue to celebrate Music's Biggest Night.

"What better way to celebrate Music's Biggest Night than with an amazing GRAMMY after-party where our guests can continue to enjoy their evening surrounded by music, incredible food and a stunningly visual party atmosphere culminating in not-to-be missed performances," said Neil Portnow, President/CEO of The Recording Academy. "This year's glamorous Roaring '20s theme is sure to provide a uniquely memorable experience for all."

"With more than 600 catering and service staff, 400 production team members, 200 security agents, 60 dancers and acrobats, five featured performances, and hundreds of hours of planning, it is a daunting yet rewarding task to mount the largest and most complex awards show after-party annually," said Branden Chapman, Executive in Charge of Production & Chief Business Development Officer of The Recording Academy. "Each year, we are honored to bring our Recording Academy members and annual GRAMMY nominees together to celebrate the year in music amid amazing performances, delectable cuisine and spectacular thematic design."

The Recording Academy will produce the post-telecast GRAMMY Celebration, overseeing all of the event entertainment, décor and other logistics needed to fill the vast convention space, which equals the size of three football fields. The Roaring '20s theme will come to life with entertainers, dancers, acrobats, elaborate projections, and floor-to-ceiling design reminiscent of the lavish and opulent decade. Renowned celebrity caterer Along Came Mary returns to cater the event with an exquisite menu that includes five buffet-themed stations (New York Italian, Chicago Steakhouse, Atlantic City Boardwalk, Los Angeles Brown Derby, and San Francisco Chinatown) and numerous event-themed desserts such as signature hot fudge sundaes, Boston cream whoopie pies and Coney Island devil dogs, among others. The evening will also feature fine spirits by Patrón Tequila, Ultimat Vodka and Pyrat Rum, and beer by Anheuser-Busch. Beverages at the event will be provided by Pepsi.

The menu was designed using locally grown meat, produce and cheese, when possible, and all seafood is sustainably produced. Leftover edible food from the GRAMMY Celebration is donated to local food banks and all cooking oil used for the event will be recycled.

The 56th Annual GRAMMY Awards will take place live on Sunday, Jan. 26, 2014, at Staples Center in Los Angeles and will be broadcast in high-definition TV and 5.1 surround sound on the CBS Television Network from 8–11:30 p.m. (ET/PT). The telecast also will be supported on radio worldwide via WestwoodOne, and covered online at GRAMMY.com and CBS.com.