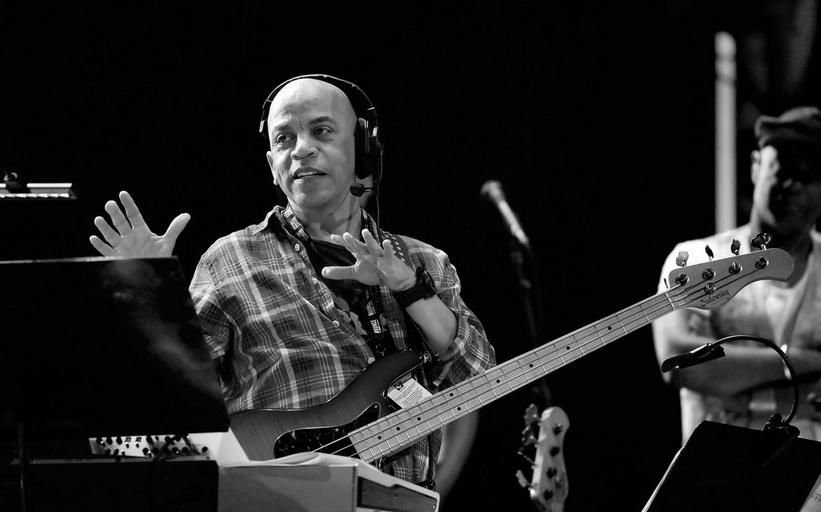 From Gladys Knight to Beyoncé and beyond: How the music master continues to grow his legacy with passion, positivity and a whole lot of hard work

When entering your career with your legacy in mind, you put forth effort to building it with grace and determination, and you come to understand there will be challenges and victories for others to learn from. Few professionals in any industry have done this as well as music director, composer, and producer Rickey Minor, who excels at not only enriching his own live but the lives of others.

The Emmy Award-winning stalwart has worked with a multitude of renowned artists such as Whitney Houston, Gladys Knight, Beyoncé, Elton John, Usher, and Aretha Franklin – and the list continues to grow. He’s acquired a wide range of television credits including the GRAMMY Awards Telecast, "The Tonight Show," "The Emmys," and "American Idol." While building his legacy and continuously developing his craft, Minor has never lost sight of the impact he’s wanted to make on the lives of the people his work has touched.

"I think what your real legacy is, is how you make a difference and how it impacts the lives of the future," he says. "Music is what I do, it’s not who I am. Who I am is going to be really passionate about the future."

Before writing his self-help book on hard work and positivity, There’s No Traffic On The Extra Mile, Minor taught himself what it meant to go the distance in order to live a fulfilling life. After picking up his first instrument at 14-years-old and attending UCLA on a full scholarship, Minor discovered his purpose early in his career when he landed the gig of a lifetime at the young age of 19.

"A real defining moment for me was getting the gig with Gladys Knight because then I felt like I could do anything," he reminisces with excitement. "The fact that I left school to play music and in a year’s time I got my very first gig... It was at that point that I thought it’s possible for me to make a living. Then all of the other things lined up as they do when you just stay focused and work hard."

His work with Knight led him to working with the late Whitney Houston years later. In 1986, Rickey Minor joined Houston’s band and a short time later became the band’s music director. While in that role, he viewed each member as his peers and as people he could learn from.

"We weren’t looking to break any records. We didn’t know anything. We were kids," he says.

Minor appears in the new documentary, Whitney, where he discusses his experience working with the superstar. He's still astounded by the Houston's groundbreaking performance of the "Star Spangled Banner" at the 1991 Super Bowl, which Minor arranged and produced, and he knew that his purpose wasn’t to be achieved alone.

"No one knew how it would impact the world and that we’d talk about it years later," he says. "That was a game changer. To contribute to that is just incredible because it takes a team. It’s not a one-shot I did or you did; it’s we did."

Understanding that everything had to line up to make the evening perfect was first on his list. "This was the Gulf War, so there was a lot at stake there," he explained. "The country was feeling like it needed to ban together and [Houston] did that with that vocal. No one understands what it takes to do that, in a stadium like that."

"My job in theory is very easy," Minor says. "My job is to add value. It’s not to change somebody’s mind. It’s to make whatever you are better. To make sure people know that you’re there working."

Minor also explained that, while working with an artist, he’s not there to try to make them someone else, he’s there to assist them in finding their center and propelling them to be the best version of themselves.

"I’m going to give them options and let them pick the best one for them," he says.

Minor’s leadership has helped many aspiring artists find their voice. As a returning music director to one of America’s most sought out talent shows, "American Idol," he has demonstrated the opportunity shows like "…Idol" and "The Four" can create for developing a long-lasting career. This type of extra preparation has helped certain artists set themselves apart from mere viral sensations plucked from the social clouds and placed into high pressured situations.

"I think it’s a great thing that this outlet happened," he says. "'…Idol' is a great platform because people get a chance to be seen where they never would’ve been seen before."

"That’s the incredible thing," he continued. "That’s where the Carrie [Underwood]s and Jennifer[Hudson]s have really made it big but in a lot of cases. The problem becomes that [viral sensations] don’t have enough experience so they aren’t able to rise to the point where they can sing a duet with Adele or Beyoncé. It’s because a lot of those folks had a natural ability and they were going to be strong no matter what, and to top it off, they’ve had more experience. They’ve had a chance to get more experience."

Aside from emphasizing the importance of gained experience, Minor shares what he does in his beloved "Rickey Time," where he returns to his center, spends time with family and friends, while unplugged from the remaining parts of the world to reflect and practice gratitude.

This reflective time helps manifest his contagious philosophy on positivity, which he shares with anyone who may cross his path. Being a Louisiana native, later raised in the Watts, to beating all odds and stereotypes placed in front of him for being a Black man, Rickey Minor has transformed his positive way of thinking into a lifestyle.

"Where it starts is in acceptance of yourself. Accepting who you are, where you are, where you’re from and being okay with it," he says. "Whatever I am, I am. If you don’t foresee the thing that you wanted anymore, know that it is okay to change your mind. Don’t feel like you need to prove anything to anyone. It is your life. Ask for help. People will help you."

Asking for help and reciprocating it is something Minor has mastered. He’s guided many of the greatest into the highest operating level of their careers while aiding in their defining moments. For Minor, those moments are made through dedication and hard work, which in turn forms a sustaining legacy.

"We have limited time. You can make more money but you can’t get anymore time. For me, I would hope that the music part of my legacy is that hard work and focus will help push you forward in whatever career you pick."

Rickey Minor is a member of the Recording Academy and can be seen in the Academy's We Are Music campaign.