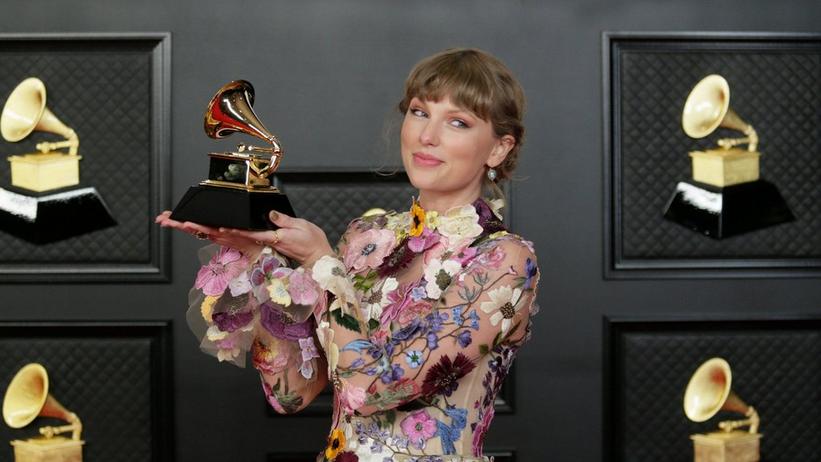 Taylor Swift at the 2021 GRAMMY Awards.

GRAMMY Rewind: Taylor Swift Thanks Joe Alwyn For Being Her Quarantine Co-Writer In Album Of The Year Acceptance Speech In 2021

When Taylor Swift's 'folklore' won Album Of The Year at the 2021 GRAMMYs, she had a long list of people to thank and a lot to celebrate — her win made GRAMMY history.

The impact of the COVID-19 pandemic and subsequent shut-downs was easy to see at the 63rd GRAMMY Awards ceremony in 2021, both visually — artists wore masks and sat at distanced tables, instead of in traditional auditorium seating — and in the music represented at the show.

Taylor Swift's Album of the Year win for folklore was a perfect example: The project was one she wrote in the early days of the quarantine. Introspective and styled after a stream of consciousness, the project was recorded in Swift's home studio, her collaborators dialing in virtually to help her round out the project.

In this episode of GRAMMY Rewind, watch Swift and some of her collaborators take the stage to accept the trophy for Album of the Year at the awards show in 2021. After turning the podium over to her co-producer and close collaborator Aaron Dessner, it was Swift's turn at the mic, and she could barely hold back her emotions as she expressed her gratitude to the long list of people who helped make folklore come to life.

In a nod to the strange times in which the record was made, she noted that one collaborator — Justin Vernon, better known as Bon Iver — participated in making the album without ever physically being in the same room as Swift. "I'm so excited to meet you one day," she said with a smile.

One of her biggest debts of gratitude, though, was to her partner in quarantine and in life, actor Joe Alwyn. "Joe, who is the first person that I play every single song that I write, and I had the best time writing songs with you in quarantine," Swift gushed.

But of course, the most important thank you went to the singer's massive, fiercely loyal fan base. "Mostly, we just wanna thank the fans. You guys met us in this imaginary world that we created and we can't tell you how honored we are, forever, by this," she said.

Press play on the video above to watch Swift's full acceptance speech, and keep checking back to GRAMMY.com for more episodes of GRAMMY Rewind.

The Magic Of 'Melodrama': How Lorde's Second Album Solidified Her & Producer Jack Antonoff As Global Stars