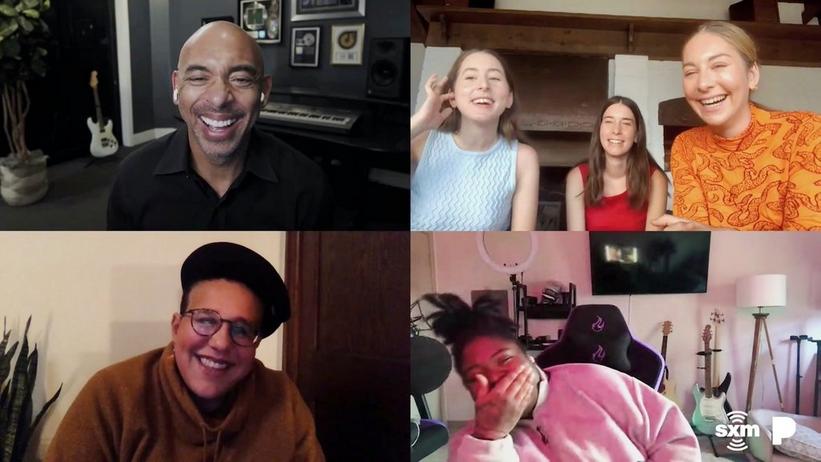 HAIM, Brittany Howard and CHIKA Deliver Dynamic Performances and Tease A Collaboration During Pandora LIVE's Countdown To The GRAMMY Awards

The GRAMMY nominees sang songs off their latest projects, spoke on their processes and bonded over their shared eagerness to get back on stage

Between the nominees and performers for the 63rd GRAMMY Awards, female artists are an undeniable force to be reckoned with this year. Pandora LIVE's Countdown To The GRAMMY Awards on Thursday, March 12, was further proof of the abundant girl power, honoring GRAMMY nominees CHIKA, Brittany Howard and HAIM. Hosted by Chair & Interim President/CEO of the Recording Academy Harvey Mason jr., the virtual GRAMMY Week event featured dynamic performances and an insightful interview with all of the above women.

Before the performances began, everyone spoke on the releases that resulted in their GRAMMY nominations. CHIKA remarkably earned her first nod following her debut project with Warner Records, Industry Games (the rapper/singer is nominated for Best New Artist). Perhaps even more notable, the album arrived just as COVID-19 hit last year. "I haven't gotten the normal experience that an artist has once they put out their first project to see the reaction," she said. "So, to get this acknowledgment in such a high regard off of my first year out is incredible to me, but also still something I'm processing."

Howard touched on the doubts that arise when making a new record but ultimately had one way to describe her five nominations: "I'm shooketh." HAIM, who told Howard they can relate to the uncertainty artists often feel, discussed how the process of their album Women In Music Pt. III—up for Album of the Year—aligns with the isolation the world has seen in the pandemic.

"When we wrote this record in particular, we were all collectively in a depressive spiral," Este Haim, the group's bassist, said. "I think we all felt really isolated, so a lot of the subject matter on Women in Music Pt. III is about feeling alone. And then, lo and behold, we put out this record in the middle of a pandemic, where everyone collectively feels some version of loneliness. We're just really happy that it resonated with people during this really insane, crazy time in our lives. We just want to make people not feel so lonely."

The women bonded over several things in their conversation, with the most significant commonality being how much they all miss touring. "That's what we're so excited about," Danielle Haim said. "People are going to want to see live music so bad that I hope we're going to just be playing our asses off." Echoed Este, "It's going to be the Roaring '20s 100 years later."

"Music is such an energy exchange that making it is ... if you're doing it right, you feel exhausted afterward," CHIKA added. "The way that humans typically recharge is being in an electrifying room with people who genuinely support you … But there is no recharge unless you've begun to pivot and adapt to the circumstances that we're all under right now."

It was easy to see that all three artists are itching to get back in front of an audience, as they each gave their performances their all. CHIKA was up first, delivering a captivating medley of her tracks "My Power" and "On My Way." She closed with a sultry song titled "FWB," the lead single from her latest EP, Once Upon a Time, which arrived just hours after the performance.

Another topic everyone agreed upon was their desire not to be defined by one genre. Howard's GRAMMY nods particularly prove that she really is genreless: Her album Jaime spawned nominations in the Rock, Alternative, R&B, and American Roots Music categories.

"I love everything, I like everything," Howard explained of her boundary-pushing sound. "I find life to be really suspenseful. Experiences, emotions, colors—it's just musical to me. All of that belongs in my music. I'm just putting out what I'm experiencing. The fact that I'm nominated across all of these genres makes perfect sense to me. That's how I absorb sounds, whatever it is."

Howard flexed her versatility with her four-song performance, playing Jaime tracks "Stay High," "Baby," "Goat Head," and "13th Century Metal." Her stage setup transported viewers to the venue, as she had a full backing band and a draped curtain backdrop illuminated by blue and pink lighting. The bridge of "13th Century Metal" felt like Howard was leading a congregation as she chanted, "We are all brothers and sisters!" and tromped around the stage with strobe lights flashing around her.

HAIM closed out the show with four effervescent tunes. Although they opted not to play their Best Rock Performance honoree "The Steps," the sisters did stick to tracks from Women In Music Pt. III, including "Summer Girl," "Gasoline" and "I've Been Down." For the final song, HAIM's lead singer Danielle tackled "Man From the Magazine" solo with an acoustic guitar, making for a powerful finish to the female-dominated event.

Before signing off, the women teased that this might not be the last time fans see them all in one place. "I'll produce beats for you, CHIKA," Howard offered, to which Haim's Este yelled, "I'll play bass!" CHIKA excitedly urged, "We need to trade contact info." If the night's performances were any indication, that would be one heck of a collaboration.

Women In The Mix 2021 Recap: How Female Powerhouses Convened To Close The Wage Gap And Amplify Women's Voices Across The Music Industry