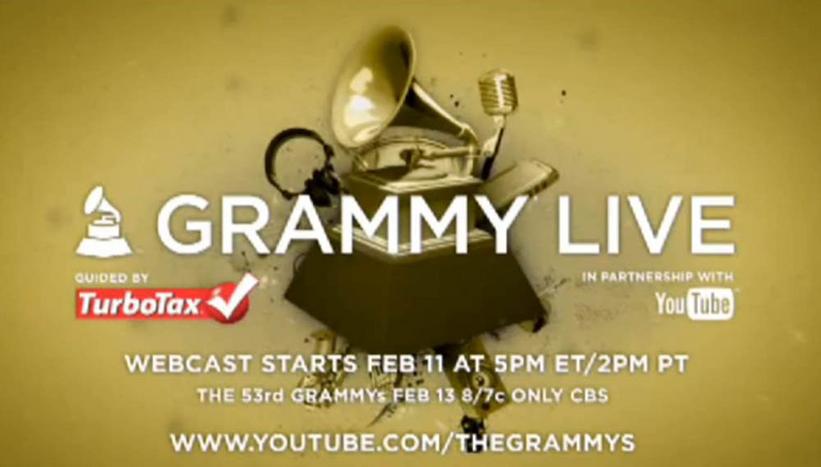 GRAMMY Live: Your live ticket to the 53rd GRAMMYs

For the second year in a row, music fans worldwide will have the unprecedented opportunity to experience and participate in the color and excitement leading up to GRAMMY Sunday through GRAMMY Live — a real-time, innovative three-day online broadcast of the VIP events leading up to the 53rd Annual GRAMMY Awards on Sunday, Feb. 13.

"GRAMMY Live has evolved into a truly engaging online experience that takes users beyond the Sunday telecast and behind the velvet rope," said Peter Anton, The Recording Academy's Vice President of Digital Media. "The Recording Academy is proud to partner with AEG Digital Media, YouTube and our sponsor TurboTax to bring GRAMMY Live to music fans worldwide. We are thrilled to provide an online-only experience enabling fans to interact with their favorite GRAMMY moments, artists, events, and more, for three very exciting days."

AEG Digital Media is partnering with The Recording Academy once again to live stream all of the action. Using its homegrown, feature-rich Tremelo Player, AEGDM allows superior performance including multiple camera-angle viewing options that can be accessed on GRAMMY.com and YouTube.

GRAMMY Live also leverages Akamai's global distribution HD network for live streaming and video on demand to power the extensive live and on-demand streaming programming of events. In addition, AEG Digital Media will also deploy its social media aggregation tool "The Hawk," which will allow complete and unified messaging from the official GRAMMY blog team, celebrity and artist tweeters, and fans all over the world. The Hawk will aggregate and present all messaging around the streaming experience, providing the ultimate digital engagement for Music's Biggest Night.

LiveU has also returned as a GRAMMY Live partner by enabling The Recording Academy to stream live footage without being "hardwired" thanks to mobile backpacks. The backpacks bond Verizon, AT&T, Sprint, and T-Mobile wireless services together (3G and 4G LTE/WiMax) and utilize a LiveU proprietary antenna, which allows HD-quality video transmission and helps overcome spotty connectivity in low-coverage or congested areas. This technology also is utilized by hundreds of leading news, entertainment and sports broadcasters in the United States and in more than 60 other countries.

The GRAMMYs' annual Blog Program on GRAMMY.com has set the bar high for this year's show by featuring blogs from numerous first-time GRAMMY nominees that reflect on their emotional reactions to their nominations. Other participants include Rolling Stone contributing editor, Huffington Post blogger and Emmy-nominated TV and GRAMMY writer David Wild; and a variety of genre-specific community music bloggers from across the country. The Blog Program reflects only one aspect of the revamped GRAMMY.com, which now empowers fans to view, share and discuss hours of archived video footage, news posts and photos. A live countdown clock to the telecast also appears on the site and is available as a widget.

The Recording Academy has partnered with the most progressive online broadcast companies and leveraged the best of both open source and proprietary technologies to deliver a cohesive, exciting and more enriching user experience for GRAMMY.com and GRAMMY.org, including Drupal, Lullabot, Ooyala, Rackspace, and Simply New.

The 53rd Annual GRAMMY Awards will take place live on Sunday, Feb. 13 at Staples Center in Los Angeles and will be broadcast in high definition and 5.1 surround sound on the CBS Television Network from 8–11:30 p.m. (ET/PT). For GRAMMY coverage, updates and breaking news, please visit The Recording Academy's social networks on Twitter and Facebook.

For a few hours Tuesday night Hollywood Boulevard was transformed into Glam Central Station as The Recording Academy officially kicked off its 54th GRAMMY Week with the inaugural GRAMMY Glam event.

It was just what you'd expect it to be from the title — an incendiary collision between music and fashion, and beauty and the beats, complete with a GRAMMY gold carpet and enough DJ firepower to ignite a musical bonfire. Sponsored by Olay, CoverGirl and Venus, and featuring the incredible DJ Spinderella (of Salt-N-Pepa), DJ Low Down Loretta Brown (aka Erykah Badu), and dynamic duo the Jane Doze, Hollywood rocked on the dance floor while exploring the cosmetics-filled caverns of the MyHouse nightclub.

"Each year, we try to reinvent ourselves," said Recording Academy President/CEO Neil Portnow before heading inside. "What we've recognized for years is that there's an intersection between beauty, health, style, fashion, and music. I can't wait to see what our team — who are the best in the world, by the way — put together for tonight."

The Jane Doze opened the night on the ones and twos, with contest winners from Turntable.fm also filling in some of the musical menu with their submissions, lending an interactive angle to the evening.

With three themed rooms that featured waterfalls, flames and even contortionists, partygoers had the chance to pose for personalized magazine covers, get tips from professional makeup artists and, while on the venue's main stage, even get a taste of what it's like to be a model on the catwalk.

"It's a marriage made in heaven," said recording artist Goapele. "Music and fashion go hand in hand. It's great that the GRAMMYs saw that and put this great night together."

Other guests echoed those sentiments, and many were excited for the chance to see Badu take her turn as one of the night's DJs.

"I'm from New Orleans and have seen [Badu] perform at Essence [Music Festival] over the years," beamed former Diddy Dirty Money member Dawn Richard. "She's a hero of mine. Everything she does is bold, from her fashion to her musical choices."

If all of the guests carrying their coats and heels in hand upon exiting are any indication, a great time was had by all. It was, by all accounts, a glam dunk, and a great way to kick off what promises to be an incredible week leading up to Music's Biggest Night.

The Recording Academy and CBS will launch GRAMMY Live, bringing music fans around the globe unprecedented, multiplatform access to red-carpet arrivals and behind-the-scenes action leading up to and throughout the 57th Annual GRAMMY Awards. GRAMMY Live will begin Sunday, Feb. 8 at noon PT/3 p.m. ET at GRAMMY.com and CBS.com and on both the GRAMMY app for iOS, Android and Windows Mobile, and the CBS app for iOS and Android, and continue through the live telecast.

Enhancing the GRAMMY Live experience will be the official 57th GRAMMY live-blog, which will provide additional comprehensive real-time coverage of Music's Biggest Night.

British songwriter, singer and actress Rita Ora will join the GRAMMY live-blog as the Official Special Guest Blogger, sharing her personal perspective from her VIP seat at Staples Center as Music's Biggest Night unfolds onstage. Ora dominated the UK charts with her first album, 2012's Ora, which was certified platinum and included the No. 1 singles "R.I.P.," "How We Do (Party)" and "Hot Right Now." Currently featured on the smash single "Black Widow" with Iggy Azalea, Ora is readying her second full-length album, to be released this year. Ora will also appear in a number of upcoming films, including the highly anticipated 50 Shades Of Grey and Jake Gyllenhaal's Southpaw. Ora is scheduled to perform the nominated song "Grateful" on the 87th Annual Academy Awards on Feb. 22.

The live-blog will also offer fans GRAMMY red-carpet updates; a one-of-a-kind front-row seat from the GRAMMY "mosh pit," just steps away from the GRAMMY stage; the latest GRAMMY updates from Twitter and Instagram; color commentary on the GRAMMY telecast; and the ability for users to comment and be a part of the lively dialog.

Music's Biggest Night will take place live on Sunday, Feb. 8 at Staples Center in Los Angeles and will be broadcast in high-definition TV and 5.1 surround sound on the CBS Television Network from 8–11:30 p.m. (ET/PT). For updates and breaking news, visit The Recording Academy's social networks on Twitter, Facebook and Instagram. 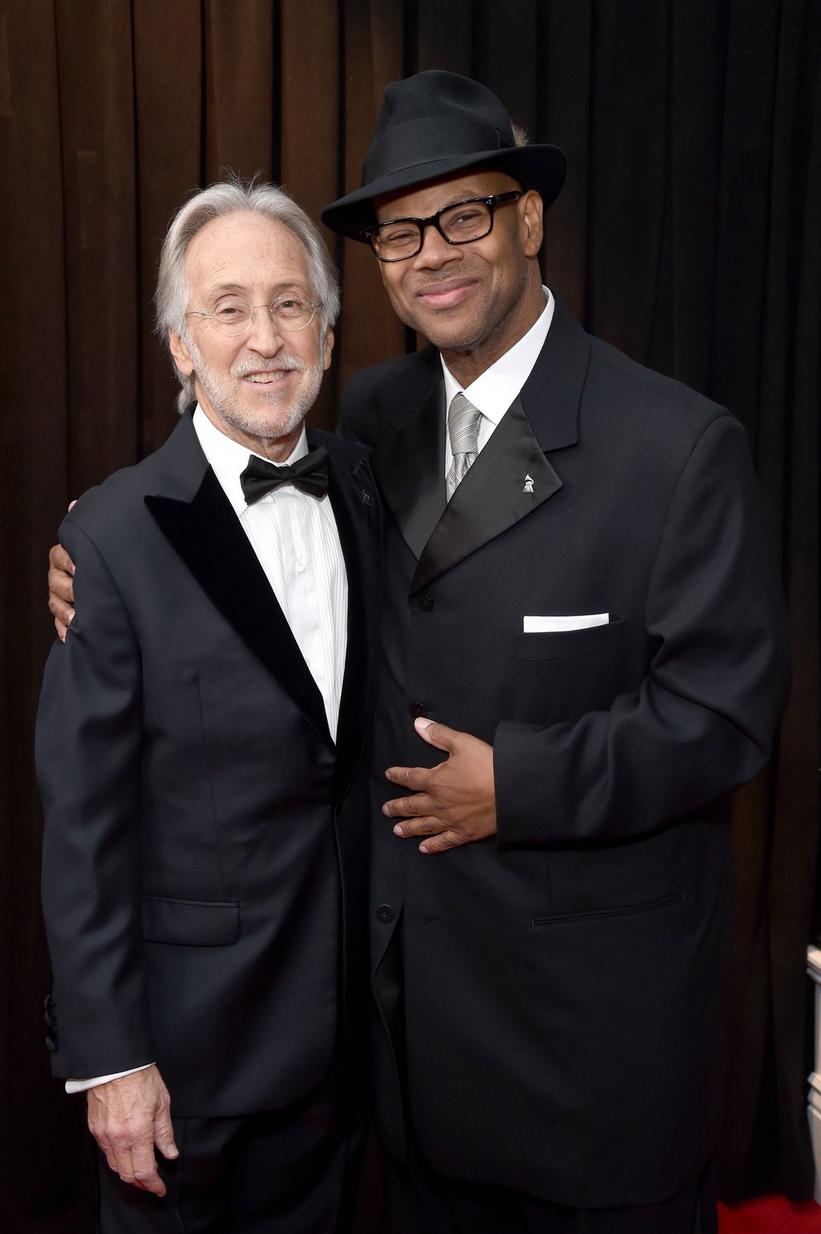 As Neil Portnow's tenure as Recording Academy President/CEO draws to its end, five-time GRAMMY winner Jimmy Jam paid tribute to his friend and walked us through a brief overview of some of the Academy's major recent achievements, including the invaluable work of MusiCares, the GRAMMY Museum, Advocacy and more.

Portnow delivered a brief speech, acknowledging the need to continue to focus on issues of diversity and inclusion in the music industry. He also seized the golden opportunity to say the words he's always wanted to say on the GRAMMY stage, saying, "I'd like to thank the Academy," showing his gratitude and respect for the staff, elected leaders and music community he's worked with during his career at the Recording Academy. "We can be so proud of what we’ve all accomplished together," Portnow added.

"As I finish out my term leading this great organization, my heart and soul are filled with gratitude, pride, for the opportunity and unequal experience," he continued. "Please know that my commitment to all the good that we do will carry on as we turn the page on the next chapter of the storied history of this phenomenal institution." 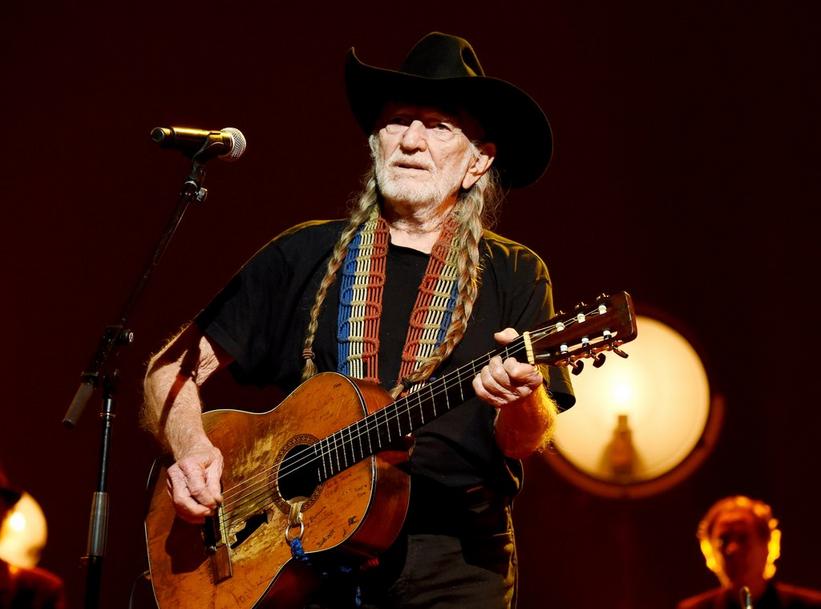 Willie Nelson To Be Honored With 2019 Producers & Engineers Wing Award

Willie Nelson may already have many accolades and achievements to his name, including eight GRAMMY Awards, but that doesn't mean there isn't room for more. On Oct. 30 the Recording Academy's Producers & Engineers Wing announced they will be honoring Nelson during GRAMMY Week 2019 to "celebrate [his] artistic achievements and creative genius."

The P&E Wing's 12th annual celebration will take place on Feb. 6, 2019 in Los Angeles, Calif. as part of GRAMMY Week, which culminates with Music's Biggest Night, the 61st GRAMMY Awards on Feb. 10. In addition to honoring Nelson, the event also acknowledges the industry contributions of the Wing's more than 6,400 professional members.

"Each year, the Recording Academy's Producers & Engineers Wing annual GRAMMY week event honors members of the recording community who exhibit exceptional standards of integrity, creativity and sonic quality," said Maureen Droney, Managing Director of the P&E Wing. "We are thrilled to pay homage to Willie Nelson, an undeniable icon with an incomparable—and uncompromising—body of work."

Nelson is a musical force to be reckoned with, a living legend who has released more than 200 albums over his six-decade career, a true leader in outlaw country music, and the larger genre as a whole. He has made an impact in the music industry as a songwriter, performer and collaborator, and in the larger world as an author, actor and activist. He has always used his platform to speak his mind and make a positive impact on those around him, such as with Farm Aid, an annual charity concert he co-founded in 1985 to support family farmers.

To date he has won eight GRAMMYs, taking home his first at the 18th GRAMMY Awards in 1975 for Best Male Country Vocal Performance for his breakout hit "Blue Eyes Crying In The Rain," from Red Headed Stranger. The album was inducted into the GRAMMY Hall of Fame in 2002, followed by several more of Nelson's recordings. Over the years he has been recognized by the Recording Academy on multiple other occasions, receiving the President's Merit Award in 1986, the GRAMMY Legend Award in 1990 and the Lifetime Achievement Award in 2000.

"Willie Nelson has inspired generations of musicians and fans, and continues to set precedents of excellence within the music community," added Recording Academy President/CEO Neil Portnow.