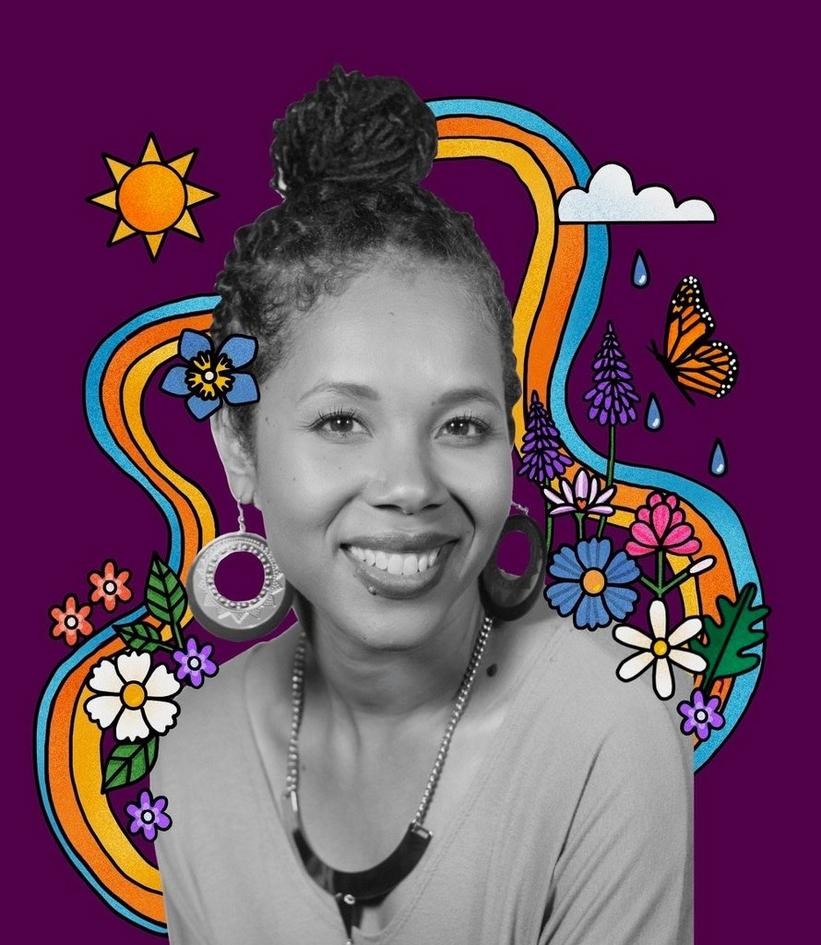 Designing Women In The Mix: How Music Inspired The Artwork Behind The Debut GRAMMY Week 2021 Event

Nourie Flayhan, the Levantine illustrator behind the program art for the Women In The Mix GRAMMY Week celebration, on how she champions women through her visuals.

The Recording Academy will kick off GRAMMY Week 2021 by honoring International Women's Day on Monday, March 8, with the inaugural Women In The Mix virtual celebration. The event will feature women producers, engineers, artists, and executives in the music industry, and is in support of the Academy’s ongoing efforts to diversify the recording industry, launched in 2019 with the Women In The Mix Pledge.

Apart from the inspiring lineup of participants, attendees will also have the opportunity to enjoy eye-catching visual arts from the Academy’s own women creatives, Alexis Mouer and Sol Iriarte, in addition to illustrations by Lebanese artist Nourie Flayhan. Known for her collaboration with Gucci Beauty, Flayhan focuses her craft in large part on increased representation of women of color in the media and challenging stereotypes that have painted women in a negative light.

We asked Flayhan to devise a number of illustrations for Women In The Mix based on song titles. We sat down with her to learn about her creative experience, the women and music that inspire her work, the power of collaborating with other women, and her vision for women artists in the future.

Who are some of the women in your life who inspired your artwork and creativity throughout your career? What sort of impact did they have on you as a creative and artist?

My younger self, definitely. She's my biggest inspiration. Most of what I do is for her. I try to be that woman that my younger self needed to look up to growing up, even when it comes to the art I create and the messages I spread through my art.

My mum, who taught me to express myself through art as a first language and nurtured the artistic side of me, encouraged me to pursue it as a career too. My late Grandmother Souad, was the original storyteller who inspired me to reclaim and tell the stories of my ancestors and people.

My little cousin, Aya, who reminds me of my younger self and is the reason why I sometimes push boundaries, to show her that she doesn't have to fit the mold created by our society and region.

I know how tough it is to grow up not seeing women who looked like me or were from the same region I came from that were being represented in the media and art.

Who are some women musicians who inspire your work on an ongoing basis?

I've always moved through music genres depending on my mood. Some of the female artists that inspire me and my work are:

Asmahan, a Syrian-Lebanese singer in the late 30's early 40's. Her rich, velvety voice and Billie Holiday's soothing voice speak to my soul and awakens my curiosity to delve into my family's past, to record their stories for an archive I'm working on.

Abir is a Moroccan-American singer; her music is a mix of familiar and new sounds, and her voice and range is so powerful.

Bjork, Cher, FKA Twigs, Solange, Dua Lipa, Lizzo, Sevdaliza, Lido Pimienta, Rosalía, Elyanna, Wafia, Rotana, Felukah, Billie Eilish, Chloe X Halle... and many more. Their music speaks to me and they inspire me visually too, with their creative visual art in their videos and how they choose to present themselves. I always end up wanting to create more personal work and push my own boundaries after listening to their music.

Can you tell us a little bit more about your creative process and your vision behind the WITM artwork?

The process usually starts off in my mind. I tend to visualize the layers of the art I intend to create, animate and build up. It is then transferred visually through illustrations onto my iPad. I digitally illustrate as it helps me edit, layer, copy layers, and change colors easily.

The style then finds its way as a result of the work being passed on for feedback. At the end of the day, it's a collaboration, so both the client and myself find ways to communicate our vision together. I was given the freedom to play, and I found it fun to open up myself to creating more simplified versions of my original sketches.

What I love about working collaboratively is the growth and stepping outside of my comfort zone that comes out of the experience itself. I created individual elements that could be moved around, layered with one another in different ways to create different settings that told different stories to highlight each talent.

It's almost like a sticker-book feel, where each person picks what speaks to them and arrange the stickers in different ways to tell their own individual stories.

How did you go about choosing the songs and playlist that inspired the WITM artwork?

The artwork created is a celebration of the women in music and the seeds they plant that are watered by the existing communities and bloom to inspire women all around the world to join the many sectors of the music industry. I realized that the rose holds a prominent place in many song titles and I wanted to highlight the flowers that were overshadowed by the rose.

It almost reminded me of how most of us who are not aware of the music industry, tend to focus our attention or are mostly aware of the lead vocalists and tend not to be aware of all the different individuals in different roles who make up the team behind the music (sound engineers, songwriters, producers, etc.).

The floral elements were inspired by the flowers mentioned in the song titles, "Forget Me Nots" by Patrice Rushen, "Daisy" by Zedd (featuring Julia Michaels), "Cherry Blossom Girl" by Air, "Lotus Flower" by Radiohead,"Build Me Up Buttercup" by The Foundations, and “Morning Glory” by Oasis.

What progress would you like to see happen for women in the music, arts and creative fields in the next 5-10 years? And how do we get there?

More education and awareness of the different roles one can enter in the industry, [as well as] more foundations funding youth programs and mentorship programs to support the younger girls who are discouraged to go into music and the arts.

I was very fortunate that my parents were supportive when extended family members were not. So I understand how it can be discouraging at times when there isn't that support system around you or the funding.

More positions in the industries are being filled and dominated by black women and women of color. Younger girls who see that will definitely aspire to one day follow their footsteps.

The environment needs to change to allow women to exist in the same space and thrive without having to compete against one another or feud with one another.

More collaborations with one another. I think it's so powerful and magical when women work together collectively. Opportunities need to be created for women all around the world to be part of creating that magic.

The Recording Academy’s “Women In The Mix” virtual celebration will take place on GRAMMY.com on March 8th at 3 p.m. PST / 5 p.m. EST. This event is open to the public and no RSVP or registration is needed.

The 54th Annual GRAMMY Awards Pre-Telecast Ceremony will take place on Sunday, Feb. 12 from 1–3:30 p.m. PT at the Los Angeles Convention Center and will be streamed live in its entirety internationally at www.grammy.com/live and www.cbs.com.

Performers Burrell, Earle, Johnson, Rebirth Brass Band, and Trin-I-Tee 5:7 each have one nod: Burrell for Best Gospel Album for The Love Album; Earle for Best Folk Album for I'll Never Get Out Of This World Alive; Johnson for Best Gospel/Contemporary Christian Music Performance for "Jesus"; Rebirth Brass Band for Best Regional Roots Music Album for Rebirth Of New Orleans; and Trin-I-Tee 5:7 for Best Gospel Album for Angel & Chanelle Deluxe Edition. DiDonato has two nominations for Best Opera Recording for Vivaldi: Ercole Sul Termodonte and Best Classical Vocal Solo for "Diva Divo." Price has three nods for Best R&B Performance (with Stokley) and Best R&B song for "Not My Daddy" and Best R&B Album for Kelly.

The live stream of the Pre-Telecast will remain on GRAMMY.com as video on demand for 30 days following the event. Following the ceremony, the 54th Annual GRAMMY Awards will be broadcast live on the CBS Television Network from 8–11:30 p.m. ET/PT.