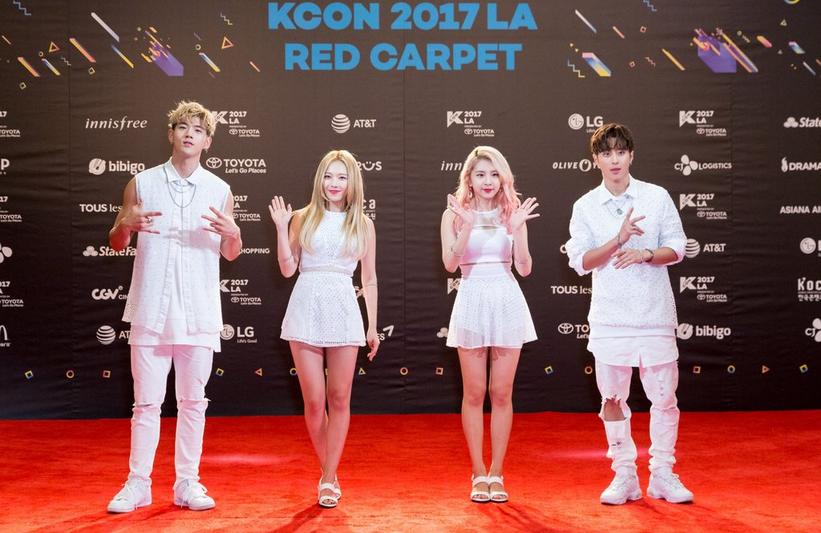 SXSW 2018: Inside The K-Pop Explosion With Kard's BM

If you've been hesitant to get onboard the K-pop revolution express, now is the time to commit. The latest proof was offered in the form of the SXSW 2018 panel How K-Pop Grew Beyond Niche, which illuminated why K-pop is such a revolutionary modern genre, with help from a very special guest: BM from K-pop group Kard.

The K-pop art form has been expanding to audiences around the globe, and artists such as GRAMMY winners Diplo, Skrillex and the Chainsmokers, and the production team the Stereotypes, who most recently won Album Of The Year as producers on Bruno Mars' 24K Magic, have lent their talents to help make K-pop's biggest stars shine. But that doesn’t tell the whole story.

BM from @KARD_Official surprised our fans at #SXSW! Thanks for joining us at our panel and can't wait for your show tomorrow! pic.twitter.com/1OPI8QGwvY

BTS' Billboard February cover issues sold out all 10,000 copies, according to Benjamin. Of Instagram's total audience of 800 million, 49 million of those interact with K-pop content on the social media platform, according to Anthony. K-pop fans spend on average 65 hours a week consuming K-pop content, 50 percent of whom are returning visitors. Approximately 36 percent of fans will travel out of state to Killoren's Los Angeles or New York yearly KCon festivals, and K-pop fans spend on average 8 percent of their annual income on K-pop.

Killoren says that part of the appeal of K-pop is its unique ecosystem. "[Fans want to be] part of something a little different that's also fun."

For fans, this extends to the dance — dance covers are very popular on Instagram — as well as food, fashion and beauty. K-pop fans also become fans of what their favorite artists love, creating huge business opportunities for brands. Recently, K-beauty has started to take off in major retailers such as Target and Sephora as K-pop's global reach — and fan base — expands.

Speaking of which, K-pop fans aren't your average fan base. Besides their immense loyalty, they're savvy about upcoming trends in music. According to Killoren, "K-pop fans are a step of two ahead" of where music is, pointing to how they embraced social media long before the rest of the music industry as an example.

For artists who cultivate their international fandom, the payoff can be huge. Fish, who works with licensees of K-pop merchandise, noted that K-pop artists bring in six or seven figure deals, on par with deals that artists such as Lady Gaga or Madonna command. And as worldwide crossover continues to gain momentum, the deals and opportunities for collaboration between K-pop celebrities and brands continues to grow.

Though it's often surprising to outsiders how popular K-pop is — particularly here in the United States since most Americans don't speak Korean — the panelists agreed that the language barrier is hardly an issue.

"[They] don't need to speak the same language," said Anthony. "It goes around boundaries."

"It's pop," added Fish. "All pop fans care about their genre."

Following the panel, the audience was surprised with special guest BM of Kard, who let the audience know he just flew in exclusively for the festival.

BM was born in Los Angeles and subsequently moved to South Korea to study for nearly five years under DSP Media before joining the popular co-ed K-pop group along with bandmates J.seph, Somin and Jiwoo. Kard will also take the stage during SXSW at The Belmont on 6th Street on March 16, marking their first major music festival performance in the U.S.

Finally, the panel shared some exclusive intel regarding the 2018 installments of the wildly popular KCon. KCon New York will be held June 23–24 at the Prudential Center in New Jersey, and KCon Los Angeles will be hosted at Staples Center — home to Music's Biggest Night — Aug. 10–12.

Still iffy on hopping on the K-pop bandwagon?