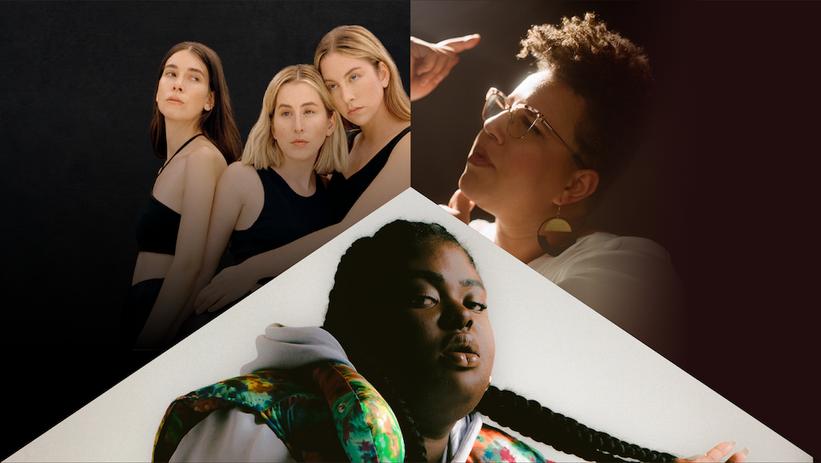 Pandora LIVE is the continuation of the popular live event turned virtual series that features top artists from all genres, including country, rock, pop, R&B and more. Listeners can RSVP for the free event here.

Pandora LIVE Countdown To The GRAMMY Awards is a precursor to the 63rd GRAMMY Awards, which airs Sunday, March 14, on CBS.

Harvey Mason jr., Chair & Interim President/CEO of the Recording Academy, will host the evening and lead a round-table discussion with all three performers.

Throughout the course of their career, Haim have fused genres and have established their own musical individuality. The band made history as the first all-female rock group to be nominated for Album Of The Year with their third studio album, Women In Music Pt. III. The album shows the trio’s multidimensionality by showcasing their songwriting style and melodies. The three-time GRAMMY nominees are set to perform for Pandora LIVE from their hometown of Los Angeles.

With 16 GRAMMY nominations and four GRAMMY wins (with her band Alabama Shakes), Brittany Howard has a compelling presence as a performer shattering soul, rock and blues norms. She will be performing for Pandora LIVE from Nashville.

CHIKA, a first-time GRAMMY nominee in the Best New Artist category this year, uses her powerful voice as a much-needed call to action for the marginalized and disenfranchised. With an instinct for creating impactful viral moments in the music, film/TV, fashion, brand and social media spaces, CHIKA’s ethos and persona have resonated with fans. Her Pandora LIVE performance from Los Angeles is sure to gain her new followers.

In conjunction with the Pandora LIVE Countdown To The GRAMMY Awards event, Pandora recently launched the GRAMMY Awards Radio station. Presented by Lincoln and airing now through March 31 on Pandora, the station celebrates this year’s nominees and shares behind-the-scene stories from past winners.

Event sponsors will enhance the viewing experience and get fans excited for the 2021 GRAMMY Awards show by curating unique content and activities. Prior to the show, Allstate will bring together some of Haim’s top Pandora listeners for a virtual meet and greet. During the show, attendees will have the opportunity to pose in the red-carpet-inspired photo booth, provided by Crest 3D White. To celebrate the event’s powerful and talented all-female lineup, Pandora and Olay Body will join forces to provide a donation to a select charity that supports fearless women in music, specifically those in STEM disciplines, and encourage everyone to get involved in the cause.

Pandora will invite fans to test their artist knowledge with pre-show trivia, connect with others via the interactive chat, and provide a limited amount of complimentary artist merchandise for attendees on a first-come, first-served code-redemption basis.