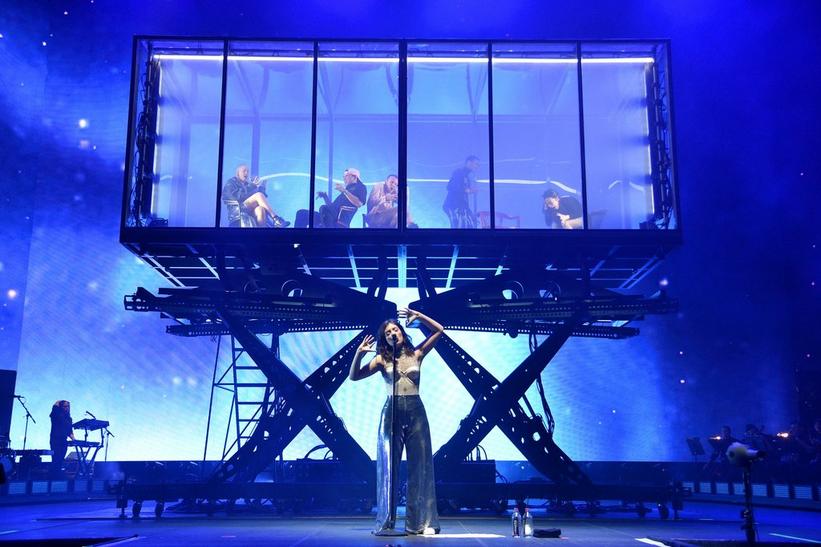 Now more than ever artists are becoming concerned with how their shows look on social media timelines. While millennials agree that stage design matters, the story is a little more complicated

These days you can't attend a concert or live music event without seeing a smartphone in the air.  Whether you're in the middle of a pit or in reserved seating, trying to capture the one image that will make people scrolling timelines at home stop and double tap is as much a part of the concert experience as being there.

According to Rolling Stone, artists are paying attention to the role their concerts play on social media and are becoming more preoccupied with how their shows look for all the people who will catch a photo online. Artists are specifically concerned with Instagram, which the magazine reports has added 300 million active monthly users in the last year alone and is the primary visual platform for social networking. The platform is a popular way fans share their experience with those at home and, consequentially, is shaping how concerts and live music events look on timelines.

Thanks to the social media platform you can catch J Balvin's giant dinosaur or Travis Scott's rollercoaster performance without having to actually be at the show. This, the magazine reports, is pressuring artists to create eye-catching show visuals with just-right lighting to help them shine on everyone's Instagram feed.

our lorde and savior

This phenomenon will only be fanned by the fact that, according to Digital Music News, the live music industry will see big growth the next few years, reaching an estimated value of $31 billion by 2022, with ticket sales projected to make up $24 billion of it.

Ray Winkler, who stage designed Beyoncé and Jay-Z's On the Run II Tour, told the magazine "The show starts the moment the first person takes a picture of it." Another designer, LeRoy Bennett, who has produced stages for Madonna, Lady Gaga and others says artists are "very concerned about the 'Instagram Moment.'"

GRAMMY U member Jessica from New York says she has noticed concert goers increasingly trying to get shots of that "Instagram-worthy" moment, once even getting elbowed by a girl at a concert who stuck her cell phone right in front of her face to get a picture of the lead singer.

"I notice a shift in focus from the quality of music & the show to the quality of an Instagram photo," she said. "This doesn't mean I don't snap a quick photo or two, but my experience is heavily based on how the artist made me feel rather than how many social media platforms knew I was in attendance."

Jessica's been an avid concert-goer for years, and, when she was younger went from using a flip phone with grainy image quality to a digital camera to get the best images. Nevertheless, while she snaps a photo or two, she  feels being present at a show is what matters the most.

"Therefore, every concert I attend, I turn my phone on Airplane Mode to escape reality for two hours & let myself live through the music," she said.

For GRAMMY U member Audrey from Nashville, stage design is a way artists can engage with fans. She takes out her lens if there is something especially appealing on stage.

think i need some Vitamin DDLovato

"I think there is some importance with social media in all aspects, and on the fan side of things it can connect people," she said. "On the artist side, I think it is so important nowadays to understand that their concert will be captured by thousands of phones and pushed out on social media."

Although she tries not to take her phone out too much, she does, "pay attention to stage visuals because I think it has become an equally as important element as the songs being sung."

It's understandable to want to take pictures of eye-catching visuals, but as all GRAMMY U members pointed out: they still want to be present and take in the magic of the music at each show. In order to get the best of both worlds, GRAMMY U member Victor has a suggestion:

"I think if artists designated a specific moment during their sets to allow fans to capture an 'Instagram moment,' then that may allow fans to stay engaged the entire time."

Stage designer Bennett has another suggestion: "We should just ban phones from any show, that's my theory. Social media has become not exactly a hindrance, but it's adding more stress into designing a show, and it's putting undue pressure on the artist. "

While there are many people for and against phone usage at concerts, everyone is there for the same reason, to enjoy a special, music-centered moment together.