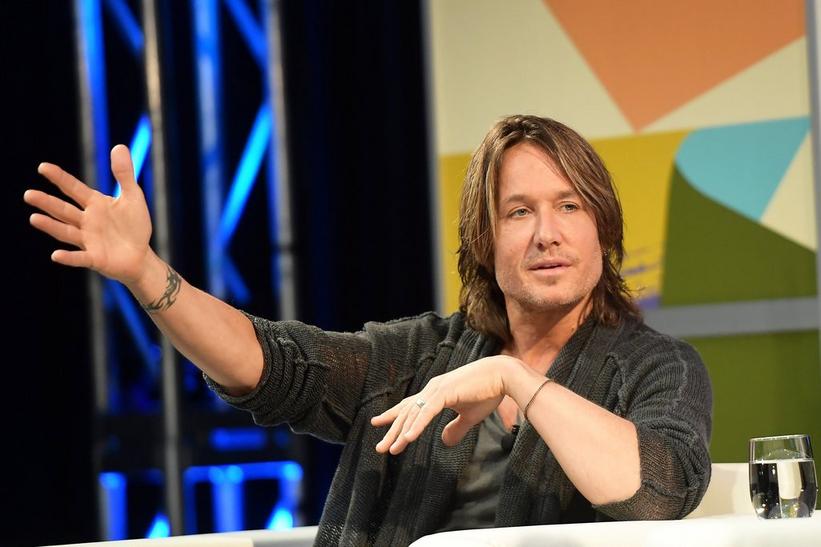 From his musical upbringing to his new album and sobriety, the GRAMMY-winning singer/songwriter went deep during his keynote discussion at SXSW

As if SXSW 2018 doesn't have enough cool stuff going on — the panels, the bands, the networking, the parties, the culture of Austin, Texas — one of this year's keynote speaker sweetened the deal just a little bit more.

GRAMMY winner Keith Urban took the stage in conversation with GRAMMY Museum Executive Director and "Required Listening" podcast host Scott Goldman on March 16. The duo covered a wide range of topics, including the singer/songwriter's early music memories, how Ricky Skaggs influenced his career, the art of collaboration, memorable career advice, and why he's a huge fan of MusiCares and Post Malone.

The New Zealand native was quick to credit his drummer father for turning him onto his love of country. As a 5-year-old, Urban had the chance to see the legendary Johnny Cash in concert, which captured the young artist's imagination.

"What I remember from that concert is just how loud the crowd was," Urban recalled. "I remember just the roar of everybody when this guy walked out on the stage and it's never left me, and the power of when he played guitar and sang was an extraordinary thing."

By age 6, Urban was taking guitar lessons and learning from the country records spinning in his parents' house as well as the local bands in his area. When he discovered the "chicken pickin'" style of guitar players such as Skaggs, the deal was sealed.

Urban also discussed how his unique musicality stems from his affinity for collaborations. Not only has he recorded with other country artists but he's also worked across many genres, including artists as diverse as the Rolling Stones, Carrie Underwood, Alicia Keys, John Mayer, Aerosmith's Steven Tyler, and many more.

Indeed, his upcoming studio album, Graffiti U, will feature a collaboration with "Issues" singer/songwriter Julia Michaels, as well as borrowing a sample from country great Merle Haggard on another track.

For his part, Urban feels collaborations keep his music fresh while also playing to his appreciation for all music genres and their creators, whether they are an EDM electronic-only musician or the classic instrumentalist.

"I'm a big believer that it's all still musicianship," said Urban. "If you're doing it on your MacBook Pro or you don't play an instrument … they still have to compose these things like a painter putting paint together in a such a way that it creates a compelling image. That's as valid to me as a guy sitting there playing guitar."

Urban further solidified his stance when asked by an audience member about his current favorite contemporary artist outside of country music.

"Post Malone because he's got his own thing, it's insane," Urban answered. "I don't even know what it is. I don't think he knows what it is, which is beautiful. It's just an incredible fusion of things — singer/songwriter, hip-hop, R&B, soul. It's just all out there and I love it."

His penchant for fusing genres and forging his own path as a singer/songwriter, while it looks effortless now, wasn't always an asset to Urban. He recalled his early days playing shows around Nashville, Tenn., when a record label employee followed his band religiously, yet there was no indication the label wanted to sign him. When the guitarist finally asked why, the employee had some sage words of wisdom for the emerging artist.

"You're just really unique and it'll be your biggest curse until it becomes greatest blessing,'" Urban recounted. "And as cheesy as that might sound … what I took from that was stay the course and it's just going to take time."

With Goldman guiding the conversation, Urban went deeper on more personal topics, including his path to sobriety.

"It's such a personal thing, sobriety, for each person," Urban said about his journey. "I wished I gotten sober many, many years before I did but it is what it is. I'm glad that I finally got here almost 12 years later. I think for me it's made it possible to do the things I do."

Urban revealed that the Recording Academy-affiliated charity MusiCares was a driving force behind him getting help in the 1990s. The organization's MAP Fund helped pay for his first rehabilitation treatment, which is part of the reason he has lent his support to not only MusiCares but other charitable causes throughout his career.

To conclude the panel, audience members expressed their appreciation for Urban's music, including fans from as far away as Canada, Brazil and France. For Urban, who will play a special showcase at SXSW at Stubb's BBQ on March 16, it's clear that his reach will continue to make waves in the music industry for years to come.