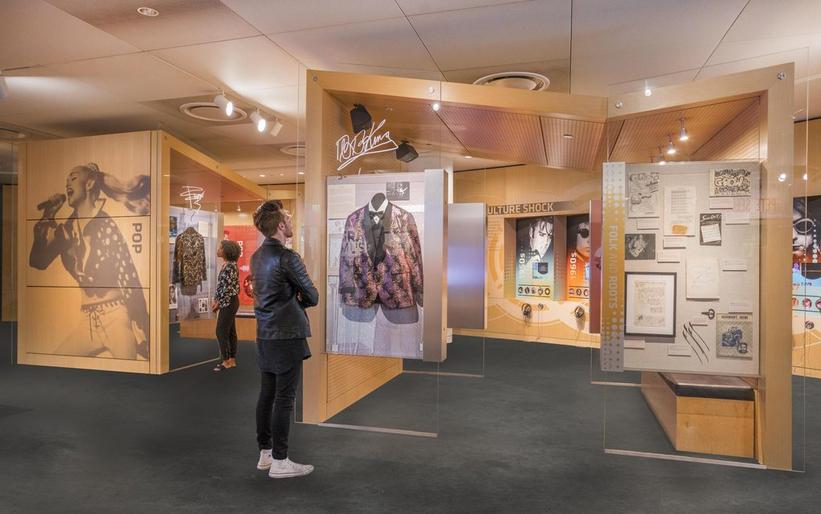 Today, the GRAMMY Museum's Grant Program announced that $220,000 in grants will be awarded to 12 recipients, including UCLA, UC San Diego, The Apollo Theater Foundation and more, to help facilitate a range of research on a variety of music-related subjects, as well as support a number of music and film archiving and preservation programs.

Funded by the Recording Academy, the GRAMMY Museum Grant Program provides annual grants to organizations and individuals to support efforts that advance the archiving and preservation of the recorded sound heritage of the Americas for future generations, in addition to research projects related to the impact of music on the human condition.

In 2008, the Grant Program expanded its categories to include assistance grants for individuals and small to mid-sized organizations to aid collections held by individuals and organizations that may not have access to the expertise needed to create a preservation plan. The assistance planning process, which may include inventorying and stabilizing a collection, articulates the steps to be taken to ultimately archive recorded sound materials for future generations.

"This year marks the 34th year that the GRAMMY Museum and Recording Academy have partnered to provide much deserved funding for music research and preservation projects across the United States and Canada. During that time, we have awarded more than $7.7 million to nearly 450 grantees," said Michael Sticka, President of the GRAMMY Museum.

"As an educational and cultural nonprofit institution, we know firsthand how critical grant funding is in order to deliver measurable results and impact through our mission. This is why we're proud to support these impressive projects that are at the intersection of music and science, and work to maintain our shared musical legacy for generations to come."

The deadline each year for submitting letters of inquiry to the Grant Program is Oct. 15. Guidelines and the letter of inquiry form for the 2022 cycle will soon be available at www.grammymuseum.org.

Read on to learn more about the 12 awardees of the 2021 GRAMMY Museum Grant Program.

How can we use music to reduce conflict? This project designs and tests a novel music-based intervention to counter dehumanization of marginalized groups, leveraging the finding that learning about others' musicality leads us to judge others more sensitive, intelligent and wrong to harm. Using a randomized controlled trial and a pre-post design, researchers test whether learning about the musicality of marginalized individuals can reduce dehumanization.

This project will test a new music-based measure for profoundly brain-damaged children who are minimally responsive. A correlational study will test the reliability, validity and diagnostic capability of the Music therapy Sensory Instrument for Cognition, Consciousness and Awareness (MuSICCA). This first standardized measure for pediatric profound brain injury will significantly impact patients, families and professionals, and establish tools for future research.

For cochlear implant (CI) users, the degraded CI signal makes it difficult for them to enjoy music, potentially impacting quality of life. This project will create a validated tool, the Survey of Music Enjoyment, that can be used by clinicians and researchers to investigate factors leading to, and neural substrates linked with, music enjoyment. Using this tool, researchers will examine differences between prelingually and postlingually deafened CI users.

Drum set educators play a vital role in promoting healthy behaviors in their students, yet few drummers report having been trained in the prevention of playing-related musculoskeletal disorders (PRMDs). This project will explore the reasons why drum set educators do (or do not) teach PRMD prevention. The results will guide the creation of resources to empower instructors to develop or enhance this aspect of their curricula.

The Frank Schiffman Apollo Theater Collection in the archives of the National Museum of American History (NMAH) consists of unique artifacts (photographs, business records and press clippings) spanning the theater's opening through the mid-1970s. The Apollo aims to further collaborate with NMAH to digitize these materials, fill in gaps in the Apollo's digital archive, and preserve these priceless objects for future generations of music enthusiasts.

The Freight & Salvage will continue preservation of performance recordings dated 1969 to 1989. This phase represents 30 percent of 2,500 recordings featuring historic musicianship collected over their 52-year history. Finalizing analog formats, this project will begin transferring recordings dated 1989 to 1999 to include early digital formats, e.g., DAT and CDR.

Support from the GRAMMY Museum will enable the preservation of the largest known cache of field recordings of traditional French-Canadian instrumental music from Quebec. From 1965 to 1975, folklorist Jean Trudel recorded musicians at festivals, concerts, dances, and in their own homes. The grantee will digitize 107 audio and 103 video recordings made by Trudel and designated for inclusion in the National Collection of the Canadian Museum of History.