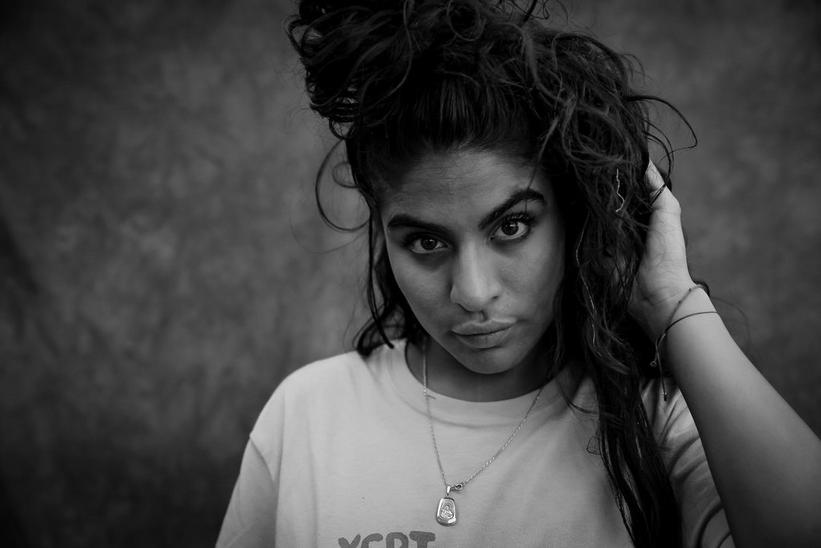 With heavy-hitter collaborations that include two tracks on Eminem's album 'Kamikaze,' the creative powerhouse with Colombian roots by way of Toronto says her primary focus is as a performer

The Recording Academy spoke with Jessie Reyez about what's on her mind, backstage after her performance at Lollapalooza 2018. With many influences and a bicultural background, she insisted on the primacy of performing as a singer, in spite of her growing success and reputation as a songwriter.

Reyez's most recent collaboration is represented by two tracks on Eminem's Aug. 31 album release Kamikaze, duetting on the songs "Nice Guy" and "Good Guy" with a co-write on both. Back in Chicago for Lolla, she has fond memories for the city's Chance The Rapper and King Louie, both of who helped her rise from unknown status. Nostalgic reflections go back to the multi-cultural streets of Toronto, Canada where she spent most of her childhood, as well as the sense she had growing up of her parents' native Colombia.

"Canada has this really cool way — specifically Toronto —  of encouraging you to wave both flags, if you've been born there, like wave your flag and then wave your parent's flag too and be proud of it," she reflected. "Some people's parents listened to the Beatles ... but my family is Alquimia, Celia Cruz and Carlos Vives, this old, rich Colombian music. I loved hearing that while I was growing up." Her expressiveness brings unusual passionate stylings to a blend of R&B and hip-hop that's distinctively her own and still evolving.

"It wasn't perfect, but it was cool," was Reyez's description of her Lolla set, emphasizing that she is "Hella meticulous." That focus on detail has her questioning the 50-50 balance of being a songwriter as well as a performer, because from her point-of-view, her many successes from songwriting and collaborating have been "like this beautiful byproduct, because it's not even like I'm focusing on that, but it's just a default of having so many songs written." Her desire for even greater focus is leading her toward giving 100 percent to everything she does, but as a rising star she is still growing in experience while transforming. Her 2017 EP Kiddo has given fans a taste of what's to come under the Jessie Reyez banner, but with so much going for her and going on with her creatively, it seems likely surprises are in store.