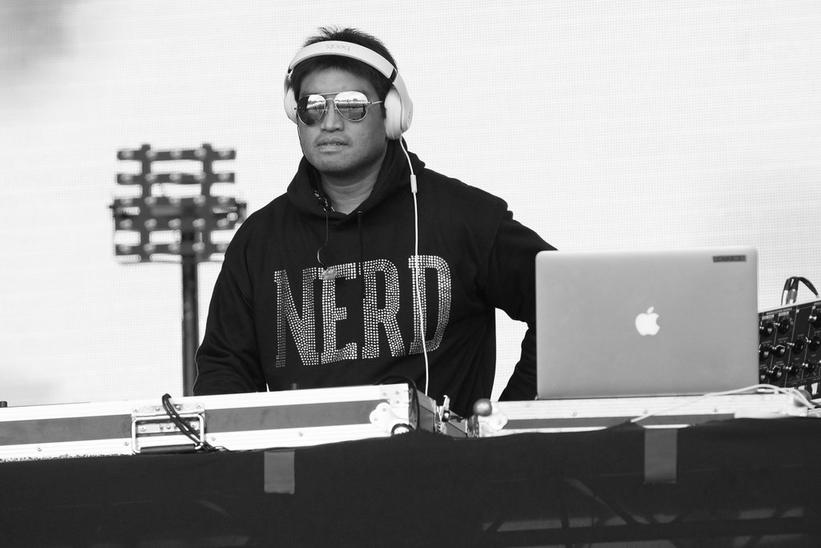 From The Neptunes to N.E.R.D. and beyond, the GRAMMY-winning musician and producer taps into what makes his music magical

Chad Hugo is a musician first. He's become famous for not wanting to be famous, preferring to let superstar friends such as longtime musical partner Pharrell Williams, or Jay-Z or Justin Timberlake, stand in the spotlight, while he stayed in the studio fine-tuning their tracks.

Through a career as a producer, as well as member of his own band, N.E.R.D., Hugo has always focused on always keeping his records vital and fresh. For years he did this using the same digital toolbox everyone used until he realized what was missing was the soulful authority achieved only when real musicians play in real time. The dimension of human artistry real musicians can bring to a track is undeniable and can’t be attained in any other way.  We spoke to Hugo about that revelation, and other ideas which have informed his remarkable career.

His story starts in Virginia Beach, Virginia, where music first enlivened his world. He was only 12 when he met Williams in the school marching band. They both were drummers, but Hugo was the Drum Major, the leader of the band, while his friend was behind him in the drumline. In time, as the world knows, Williams happily stepped into the frontman role as Hugo held it down in the back.

It was over beatboxes though, not snare drums, that they bonded. Forming a duo called The Neptunes, they got signed to a production deal by Teddy Riley, who heard them at the school talent show. For nearly a decade they produced other artists, before starting their own band, N.E.R.D. (No-one Ever Really Dies), with Shay Haley.

They created their debut, In Search Of, as they did their previous productions, with digital drum beats, samples and loops. They released it first in Europe before agreeing to reinvent the album with a slant both old school and new, fusing mechanical beats and samples with actual instruments in real time. They enlisted Spymob, a rock band, to do the playing since they felt they couldn’t. But by their next album, Fly or Die, they did it all. With incessant woodshedding, Hugo gradually grew more fluent on guitar and branched out in many directions, to saxophones, accordion, keyboards and more. Williams played the drums.

“It’s not mandatory,” Hugo says, when asked how important a mastery of real instruments was to a modern producer. “But learning different instruments allows one to take on another voice, another character. I also joined the choir at church and to sing a given song on paper, a composition, and contribute to make the message stronger is something to appreciate.”

N.E.R.D. have banded and disbanded a few times, but now they are about to embark on a major tour. Being an artist in the band instead of the producer is a role he relishes, as its liberates him to make the music most singular to his own spirit.

For his most recent production, working with Justin Timberlake on his Out of The Woods album, his mission was not to express his own soul, but to enable the artist to express his soul while devising the perfect frame.

But when allowed to do his own thing, he’s freed from other perspectives to honor his own. “In No-one Ever Really Dies,” he says, “we were given the freedom to set the trends.”

Hugo has always been a collaborator since the start, and it’s working with others, he explained, that creates the sturdy and friendly foundation that he needs. “Making music is best as a team effort,” he said, “so I'd add elements and take out elements. To be trusted on my judgements, that took time. That’s in a mix down, and during the songwriting process.”

That organic foundation still grounds every production, and always allows experimentation with the newest tools that emerge. “There’s always new technology,” he said, “and plug-ins being released. We share these technologies and implement them in production. Though we still maintain the foundation in the studio setting with the provided drum kit guitar and wind instruments.”

Being an authentic musician, Hugo knows, is all about being engaged. But as he explained, that engagement isn’t exclusive only to one’s work writing or recording a song.  To create engaged art, he said, means being engaged not only with music, but with all of life. Asked to explain his own creative process and how he maintains that dynamic connection, he pointed not towards the studio but towards being a human: “Live life to the fullest,” he said. No more words were needed or offered; it was time to get back to the music.

Chad Hugo is a member of the Recording Academy and can be seen in the Academy's We Are Music campaign.