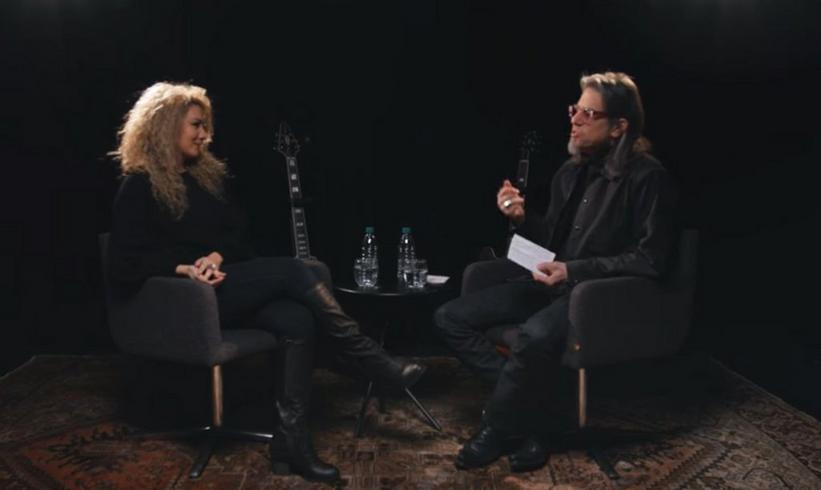 It seems there isn't anything Erika Ender can't do. She's a singer, songwriter, producer, actor, and TV personality.

As a songwriter, the Panama native has written for Latin artists including Chayanne, Gilberto Santa Rosa, Gloria Trevi, Ednita Nazario, and Los Tigres Del Norte, in addition to her own solo works such as her 2017 album, Tatuajes (Tattoos). Also in 2017, she became the youngest inductee in the Latin Songwriters Hall of Fame.

Well into the 25th year of her career, Ender is seemingly hitting her stride. Not only did the singer/songwriter take home Song Of The Year at the 18th Latin GRAMMY Awards as a co-writer of the biggest hit of 2017 — Luis Fonsi and Daddy Yankee's "Despacito" — she earned her first GRAMMY nomination for the 60th GRAMMY Awards for Song Of The Year for the remixed version of "Despacito," featuring Justin Bieber.

So what is the real story of how Ender got involved in writing the smash single of 2017 with Fonsi? You'll learn that and more on the latest episode of "Required Listening," the new music podcast by HowStuffWorks and the GRAMMY Museum in partnership with the Recording Academy, hosted by GRAMMY Museum Executive Director Scott Goldman.

"Art is made for sharing, not competing. It's like having a marriage." — Erika Ender

Ender reveals that "Despacito" was born when she visited Fonsi, her friend of 10 years, at his house. As the two were bouncing around song ideas, Fonsi kicked the now-famous line of the song to Ender: "Despacito/Vamos a hacerlo en una playa en Puerto Rico," and she answered with the next line: "Hasta que las olas griten "¡ay, bendito!" And a hit was born.

"[Luis Fonsi is] such a versatile artist. I think it was perfect for him," Ender gushed. "I think it's an amazing job we did together with a guitar at his home studio in a very organic way, not thinking of what was the outcome. Just thinking of putting the best we could in something where we were having fun."

But it's hard for any of us to ignore the outcome of their viral hit. The remix version of the track topped the Billboard Hot 100 for 16 consecutive weeks, tying Mariah Carey and Boyz II Men's supreme reign with their 1995 hit "One Sweet Day" for most time spent atop the iconic chart. It smashed other records as well.

#Despacito has broken another record, with the most weeks (42) on the Hot Latin Songs chart!
Congratulations @LuisFonsi, @Daddy_Yankee, & @ErikaEnder on creating this GLOBAL phenomenon pic.twitter.com/Qi3v4ReBJx

For a Spanish-language song to command such impact on the mainstream charts is an accomplishment that reaches far beyond the ears of billions of listeners.

"In this case, the song is in Spanish and it broke every single record," said Ender. "It has something special that did open a door. … I think that we're in a world that should have less boundaries and that should share more art and more love and I'm really happy to be part of this moment in time."

Ender's belief about a world without boundaries and a deep love for the craft of songwriting and music's ability to move mountains are consistent across her entire creative approach, especially when collaborating with other artists such as Fonsi.

"Art is made for sharing, not competing. It's like having a marriage," Ender said. "Whenever you get married you are looking for the best thing for your family, for your baby. To me, a song is a baby and I have to take care of it, and whomever I am working with has to have that same frequency so we're doing the best thing we can in order for that baby to shine. … I write with my heart, and I have no filters between my heart and my hands when I'm writing a song."

That brings us back to "Despacito," which connected the world in an unprecedented way, both for its songwriters and billions of listeners.

"This song opened the world to all of us," Ender said. "It is a song that has art that can fit any genre. It's from the heart and you can fall in love with it or dance with it or whatever you want to do with it."