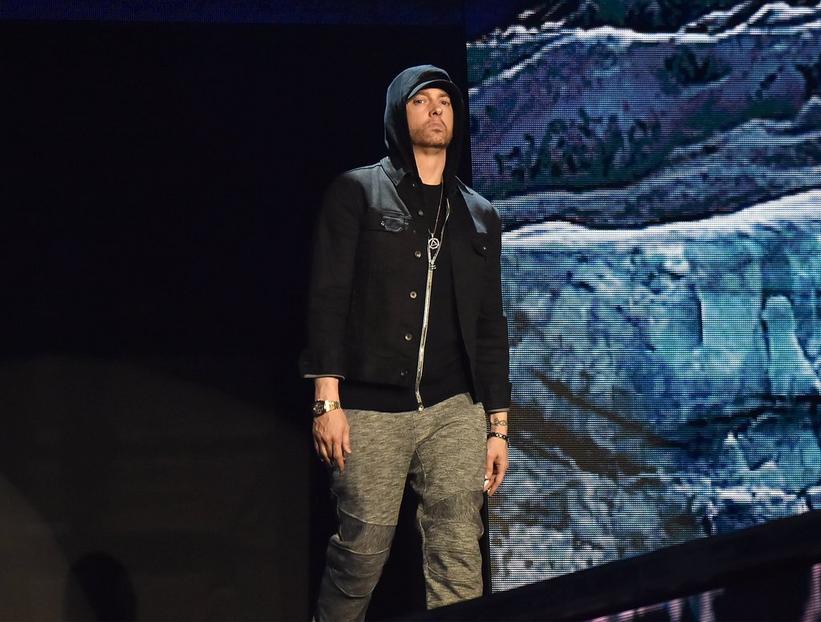 The GRAMMY winner's new song takes a blistering look at race relations in the U.S.

Eminem has released another new track from his forthcoming LP, Revival, while also revealing the album's track list and artwork.

A simmering six-minute-plus indictment of white privilege and meditation on police brutality and the current state of race relations in the U.S., the track sees Em continuing his fervent exploration of politically charged topics that informally kicked off with his controversial BET Hip-Hop Awards freestyle cypher "The Storm" in October.

Eminem recently detailed his new album for Interview magazine by way of a feature interview conducted by Elton John, who famously joined the rapper in a duet performance of his fan-favorite track "Stan" at the 43rd GRAMMY Awards.

"[Revival is] a reflection of where I’m at right now, but also I feel like what I tried to do was diversify. I’ve tried to make a little something for everyone," Eminem told John of his intentions when approaching the new album. "[When] I record an album, I do probably close to 50 songs. Each song I record has to get better," he added. "If it’s not better than the last song that I made, it’ll usually linger for a couple of months, and then it’ll be put on the backburner."

In reference to his avoidance of press coverage in recent years and comparable inactivity on social media, Eminem candidly explained, "I studied Dre a lot. … He believed that if you never go away, it’s hard for someone to miss you. And I realize that some people see going away as, 'Oh, he’s irrelevant now,' but I feel like if I don’t go away, I get sick of myself. It’s never been my thing to be in the spotlight all the time."

In the wide-ranging sit-down, Eminem and John also dug deep into their shared experience of overcoming addiction and finding sobriety, as well as the early days of Em's career working with Dr. Dre and what their relationship means to him today.

Revival is set for release on Dec. 15, and will feature collaborations with Beyoncé, Ed Sheeran, Alicia Keys, Kehlani, Pink, Skylar Grey, and more.