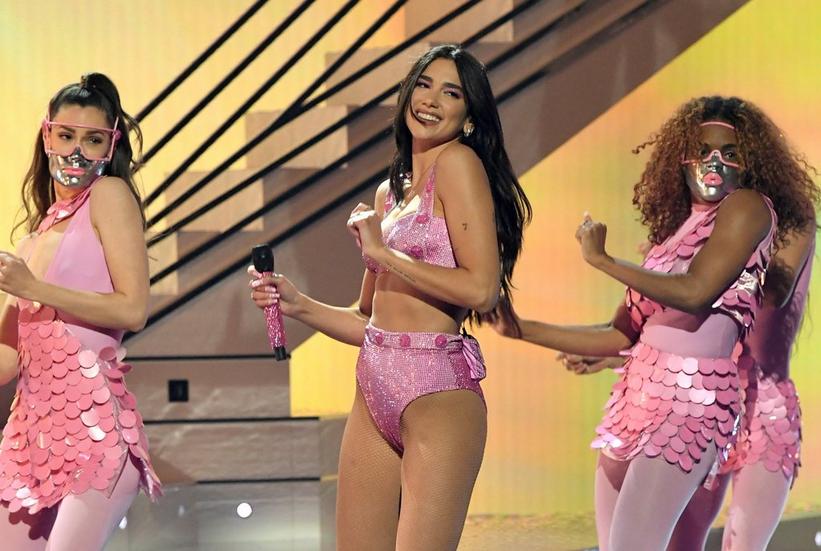 The pop star transformed downtown Los Angeles into her personal nightclub, luring viewers (including her artist peers and host Trevor Noah inside the venue) in with two hits from her Future Nostalgia album: “Levitating” and “Don’t Start Now”. Opening in front of a projected backdrop lifted from a classic ‘80s pop video, Lipa began with “Levitating” as her Barbie-pink outfit sparkled with every flashing light.

As Bad Bunny and Jhay Cortez (who performed their global hit “Dakiti” earlier in the ceremony) sang and danced along from across the room, within a blink, DaBaby appeared on stage. The rapper, who wrapped up his “Rockstar” performance just minutes before with Roddy Ricch and Anthony Hamilton, delivered his bars to the remix as a troupe of dancers sauntered around him.

Soon, Lipa returned with a second outfit change before revealing a two-piece underneath her oversized blazer. Once it was off, a revved-up rendition of “Don’t Start Now” began with the singer and her dancers performing disco-ready moves.

This year, Lipa is up for six nominations including Album of the Year (Future Nostalgia), as well as Record of the Year and Song of the Year (“Don’t Start Now”) that will be announced throughout the ceremony.